Hi Parched readers, Grist reporter Emily Pontecorvo here. This week, I’m excited to tell you about a rare thing — a win-win-win solution for drought that not only helps farmers adapt to diminishing water supplies, but can also restore degraded ecosystems and even provide a pathway to generating local, clean electricity. Let’s dive in.

In much of the western United States, farming communities are organized into irrigation districts that manage the diversion of water from streams and rivers to farmers through century-old, open-air canals carved into the landscape. Though still effective at delivering water, many of these systems – which stretch for thousands of miles across the West – are highly inefficient. In central Oregon, where the soil is sandy and porous, for every gallon of water diverted toward farms, upwards of 50 percent can seep into the ground or else evaporate into a sky made increasingly thirsty by rising global temperatures.

“You more or less have to double the amount of water you take out of the river, because you lose half of it going down this ditch,” said Steve Johnson, manager of the Arnold Irrigation District, southeast of Bend, Oregon. The drought has meant Johnson’s district has had to turn off water to users in late July or early August for the past three years, months earlier than usual. Some farmers have started to sell off assets or otherwise move away.

But just northwest of Bend, in the Three Sisters Irrigation District, the situation is very different. The district has spent the last two decades working to convert 90 percent of its open-air canals to underground pipelines – a strategy I wrote about today at Grist. That move is saving the district a reported 110 acre-feet of water per day during irrigation season, or enough to fill about 55 olympic-sized swimming pools. 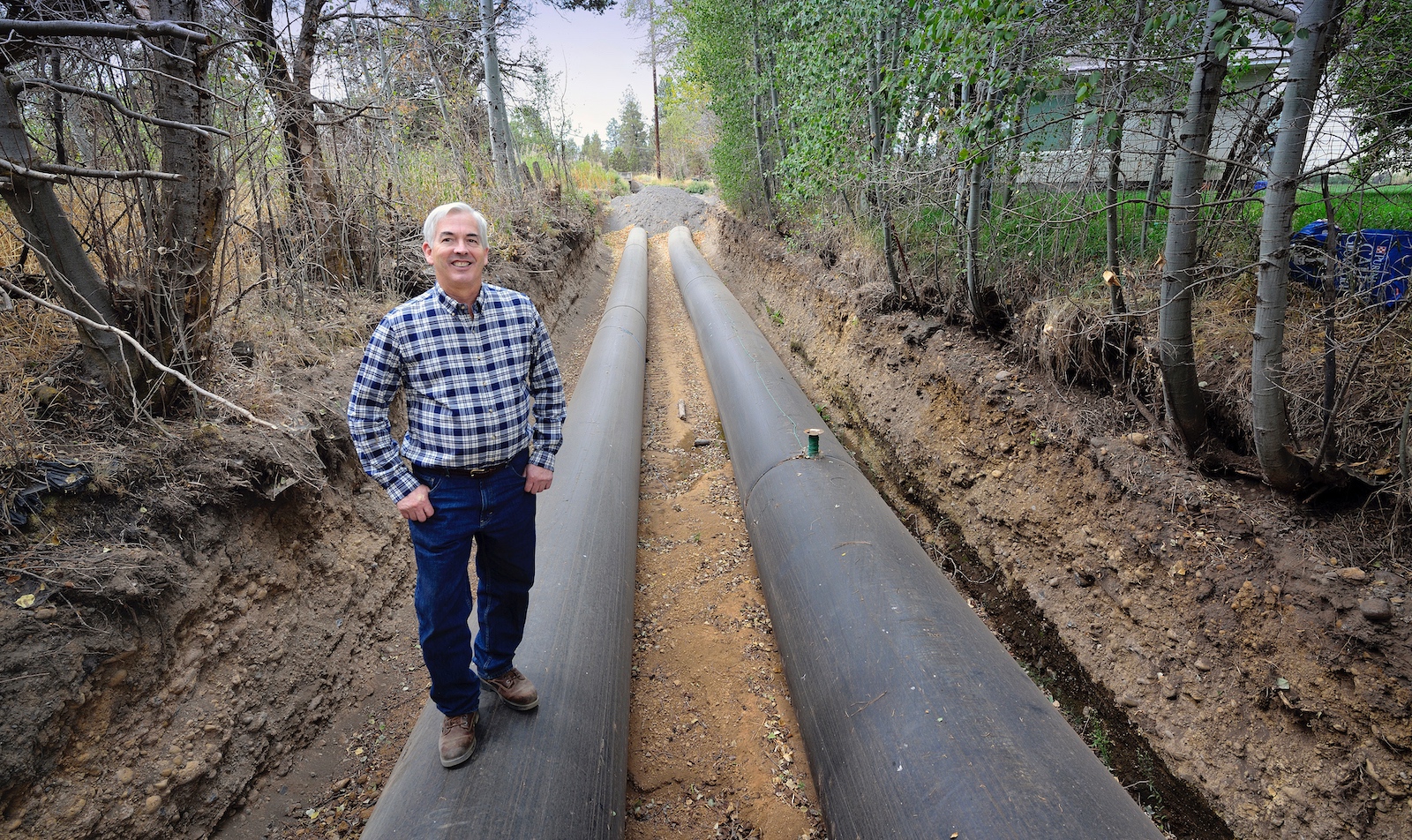 District managers are able to leave more water in Whychus Creek, a tributary of the Deschutes River that’s important habitat for salmon and trout. Farmers are also saving money. Since the piped water is pressurized, they no longer have to rack up their electricity bills pumping water out of ditches — they can just hook their sprinklers right into the pipe and open their valves.

“The pressurized water has allowed everyone to be more efficient,” said Sarahlee Lawrence, who owns the only organic farm in the district. “We haven’t had to do what other places have done, which is either turn the water off entirely, or turn the water off every other week.”

That pressurized water is also key to another major opportunity — hydropower. Three Sisters now has three small hydropower turbines installed within its pipelines. Together, they can generate about 4 million kilowatt-hours of electricity, or enough to power about 370 homes for a year.

While there’s ample opportunity to save water throughout the West by turning ditches into pipelines, hydropower won’t be possible everywhere. If there’s not enough of a drop in elevation between where the water is diverted and where it’s used, there won’t be enough pressure in the pipes to generate electricity. That’s the case in Arnold Irrigation District, which is getting ready to modernize its own system after about five years of technical studies, environmental assessments, and engineering plans. Johnson said they are going to begin replacing 12 miles of their primary canal with a pipeline later this year.

Today, with new infusions of government funding from theInfrastructure and Investment Jobs Act, and the recent Inflation Reduction Act, there’s an opportunity to accelerate this work around the country, Johnson said. “It’s several years worth of budget that’s been provided for these programs,” he said. “So you don’t have this problem where this year there’s a boatload of money but next year, there’s not.”

To learn more about how modernizing the West’s century-old canal systems can help save water and farms, click here.

The East Coast will not escape fire
By Kendra Pierre-Louis, The Atlantic
◆ Read more

The mad rush for groundwater in the Central Valley
By Saul Gonzalez, Attila Pelit, and Katrin Snow, KQED
◆ Read more