Hello, and welcome to another edition of Parched. I’m Jake Bittle, a reporter at Grist covering climate impacts and adaptation.

As drought continues to wrack the U.S. West, farmers across the region are halting irrigation and crop production, letting hundreds of thousands of acres go fallow. Sometimes this process is voluntary, like in Southern California, where one water district has paid farmers for years to let their land go unwatered. Other growers are simply being forced into the decision. Nut farmers in California’s Central Valley saw their water deliveries fall to near-zero this year amid the drought; cotton producers in Arizona also took a big water cut.

Agriculture accounts for about 80 percent of Western water usage, so reducing irrigation is one of the most effective ways to save during a shortage. But fallowing also comes with serious economic and environmental costs.

On a broad scale, less acreage in production could mean rising prices for consumers at home and abroad for everything from lettuce to almonds. Farmers in California’s Sacramento Valley, for example, have planted about 30 percent less sushi rice this year than they did in 2019 due to water cuts. As a result, rice imports are expected to reach an all-time high this year, and sushi will likely be more expensive this winter.

The local economic ramifications are even worse: In places like the Central Valley, farms and agricultural firms are often the largest employers – the migrant laborers who harvest crops, the processing and packaging facility workers, the equipment repairmen, the soil supply salespeople, and so on. Taking land out of service means eliminating many of these jobs. 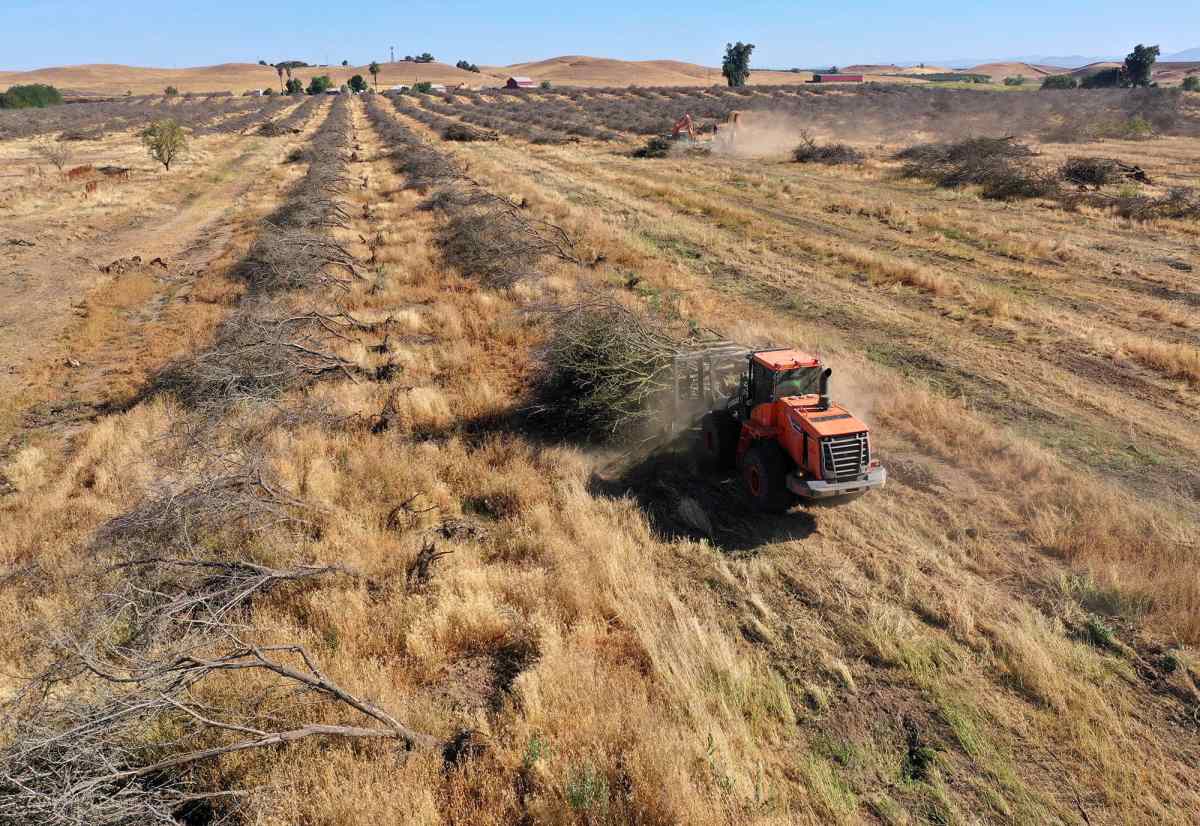 A worker with Fowler Brothers Farming uses a wheel loader to move a pile of almond trees during an orchard removal project in Snelling, California Justin Sullivan / Getty Images

“In droughts, it’s among farm workers that these impacts are felt the worst,” said Josué Medellín-Azuara, an environmental engineer at the University of California Merced who has studied the effects of fallowing in California. “When there’s fallow land … they have to displace to areas that are more distant to find [work].” Medellín-Azuara estimates that farmers in California decommissioned around 400,000 acres last year due to drought, leading to the loss of around 8,500 jobs and a $1.2 billion decrease in economic output.

Then there’s the matter of the land itself. In dry regions like Arizona, farming soil needs constant infusions of water in order to hold together. If you leave land unirrigated and unplanted, the soil can disintegrate into loose dust. That’s what happened during the 1930s-era Dust Bowl, when drought destroyed much of the southwestern U.S.’s farmland, and again in the 1990s when widespread fallowing caused dust storms north of Los Angeles that filled up swimming pools and sent drivers swerving off roads.

Farmland dust also contains high concentrations of particulate matter, which when inhaled over long periods can lead to asthma and cardiovascular disease. This has been well documented in the agriculture-heavy Central Valley, said Andrew Ayres, a research fellow at the Public Policy Institute of California and the author of a report on dust impacts.

“If you’re living in the Central Valley, it’s not just that one exposure, it’s happening repeatedly over time, and these communities are not always getting a respite,” Ayres told Grist.

The scale of fallowing in the present drought is nowhere near as widespread as it was during the Dust Bowl, but it’s already transforming life in places like central Arizona.

“We took about half our farmland out of alfalfa this year, because we just didn’t have the water,” Nancy Caywood, a farmer in central Arizona, told Grist. “There are so many acres of cotton that were not planted, and nobody’s really been putting in too many new alfalfa fields right now because of the drought.”

The impact of all that fallowing is already clear, she says — “We got a big dust storm just last night,” she told me, “I mean a wall of dust … it was spooky looking, almost black.”

Hemp was supposed to save Texas farmers during a drought. It hasn’t yet.
By Sneha Dey, Texas Tribune
◆ Read more

More than 20 million at risk as famine emerges in Horn of Africa
By Robert Bociaga and Geoffrey York, Globe and Mail
◆ Read more