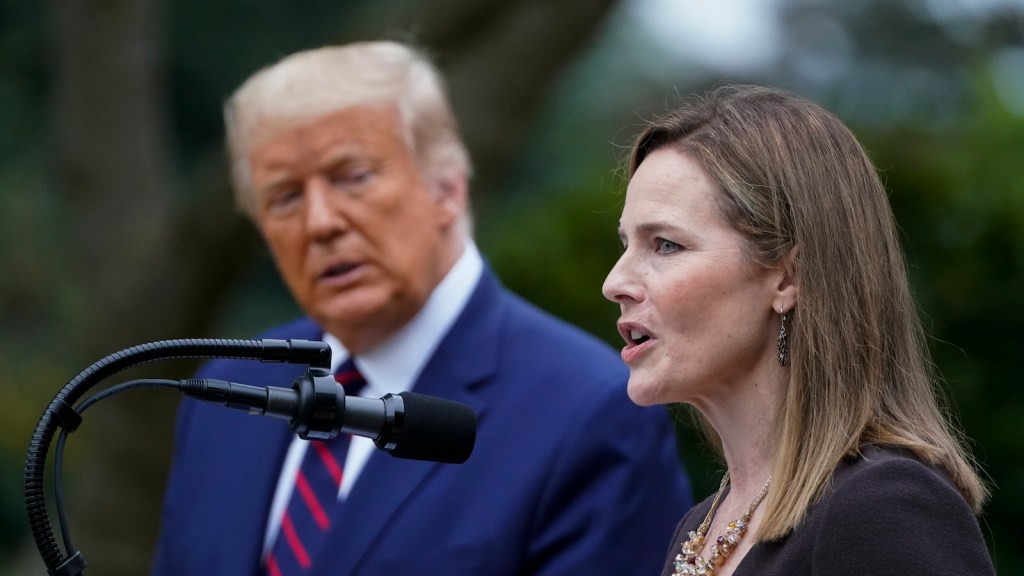 Jabin Botsford / The Washington Post via Getty Images
the jury's out

Her nomination just eight days after Ruth Bader Ginsburg’s death prompted concern from Democrats — not only because of her anti-abortion views, but also because of what a Barrett nomination might mean for environmental policy.

The prediction is that Barrett’s conservatism would tip the scales of justice rightward, opening up a Pandora’s box of climate hostility. A sixth conservative justice could pit the Supreme Court against regulatory efforts to curb greenhouse gas emissions, making it harder for federal agencies like the Environmental Protection Agency to act aggressively on climate. A 6-3 conservative court majority could also make it more difficult for the court to take up judicial challenges to the Trump administration’s rules.

Scary prospects, to be sure! But so far, these predictions are based on Barrett’s generally conservative inclination — we don’t know much about her views on climate and the environment. That’s partly because she has such little judicial experience to point to, having spent most of her career teaching law rather than practicing it. She has made few public comments about the environment, and she received no questions about climate change during her nomination hearing for the U.S. 7th Circuit Court of Appeals back in 2017.

Brett Hartl, government affairs director at the Center for Biological Diversity, said he could identify only three cases providing specific insight into Barrett’s environmental views. The first and most direct insight comes from a 2018 case in which a housing developer sued the U.S. Army Corps of Engineers over the right to put up a housing project on a 13-acre stretch of Illinois wetland. The corps had designated the area off-limits for construction, using the Clean Water Act to argue that the wetlands counted as “waters of the United States.” Barrett didn’t write the ruling on this case, but she signed onto a decision against the Army Corps of Engineers, forcing the agency to reconsider its determination.

The other two cases Hartl highlighted have more to do with Barrett’s interpretation of “standing” and “injury,” legal terms that determine one’s power to sue. If you want to go to court, Hartl explained, you have to earn standing by demonstrating that you’ve been injured. And like many conservatives, Barrett’s track record suggests that she favors a narrow and literal interpretation of standing. In one case, she found that a woman suing her debt collector for violating the Fair Debt Collection Practices Act didn’t have standing — according to Barrett, the woman failed to prove that the violation had caused her a tangible injury.

In the more recent case, decided just last month, Barrett ruled against a park protection organization and a group of Chicago citizens who were trying to stop the Obama Presidential Center from being constructed in Jackson Park. “Our parks are the last remnants of open space,” said Charlotte Adelman, one of the plaintiffs, in an interview with the Chicago Tribune. Adelman and the other plaintiffs argued that clearing trees and bird habitat to construct the presidential center would serve not the public interest, but rather private interests.

In her ruling, Barrett determined that the plaintiffs had no standing to sue the Chicago Parks District, rejecting all three of their claims: that they had standing as taxpayers, that they would suffer injury from the center’s construction, and — notably — that the project would damage Jackson Park. “The plaintiffs can’t repackage an injury to the park as an injury to themselves,” she wrote in her opinion, explicitly citing a precedent claiming that damage to the environment is not sufficient to prove standing.

What does this mean for any bigger, broader environmental cases that the court might hear? “It is quite problematic,” Hartl said, especially for environmentalists who might try to argue that they have been injured by things like climate change and biodiversity loss, whose effects are difficult to quantify.

It remains to be seen whether Barrett’s nomination will truly be a “catastrophe for climate”; her track record is very slim, and the information we do have is only a snapshot. But if confirmed, the 48-year-old Barrett would be the Supreme Court’s youngest justice, “poised to shape a generation of American law,” according to the New York Times.

“Her record is sparse,” Hartl said. “But what is there is certainly concerning.”