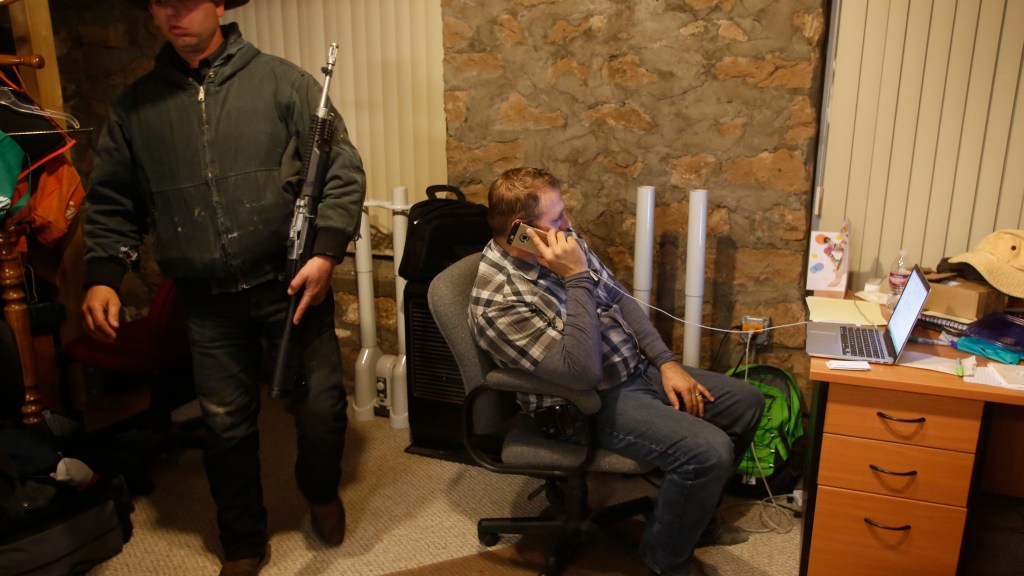 Ryan (L) and Ammon Bundy are shown in an office at the Malheur National Wildlife Refuge. REUTERS/Jim Urquhart
Politics

When those armed ranchers took over the headquarters buildings of the Malheur National Wildlife Refuge, they found something else on their hands: about 4,000 artifacts from the Burns Paiute Tribe’s ancestors. Thanks to that situation, we’ve learned that they have some pretty wild ideas about the history of whiteness, cattle, and Native Americans.

The AP got the story:

Thousands of archaeological artifacts — and maps detailing where more can be found — are kept inside the national wildlife refuge buildings currently being held by an armed group of protestors angry over federal land policy.

Ryan Bundy, one of the leaders of the group occupying the Malheur National Wildlife Refuge in southeastern Oregon, says they have no real interest in the antiquities. Still, their access to the artifacts and maps has some worried that looters could take advantage of the situation.

As a result, the Burns Paiute tribe’s chair, Charlotte Rodrique, told AP that the Bundys are holding her people’s history hostage. She’s got a serious point: The maps indicate secret locations like burial grounds and stone writings; some of the artifacts, which include stone tools and woven baskets, are close to 10,000 years old; and they’re also evidence of the tribe’s pre-colonial presence.

Ryan Bundy told the AP that “If the Native Americans want [the artifacts], then we’d be delighted to give them to them.” Rodrique said she’s not going to validate the Bundys by entering into discussion with them.

Also, it sounds plain ridiculous to have a group of armed white people handling cultural and archeological treasures that they don’t understand. This refuge has been looted for at least the last 40 years; for the tribe to hand the occupiers an inventory of thousands of artifacts would not only take an incredible amount of time, it might help the Bundys and their allies should they decide to do any looting themselves. (They’ve already done a number on the government files they’ve gotten their hands on.)

Each time the Bundys say anything about the Native American artifacts at Malheur, they reveal new levels of ignorance — even about cattle, a subject in which they claim some expertise. Cattle only arrived in the Americas about 500 years ago, along with European colonizers, and didn’t make it to Oregon until about 1840. But Ryan Bundy told the AP that “Before white man came, so to speak, there was nothing to keep cattle from tromping on those things.”

Wow. In one brief sentence, Bundy manages to completely ignore history and offend Native Americans. He fails to acknowledge that the cattle tradition he holds so dear is only about 175 years old, while the artifacts that he calls “things” have been around for 10 millennia.

Not that that matters to Bundy, who also told the AP: “We also recognize that the Native Americans had the claim to the land, but they lost that claim,” adding, “There are things to learn from cultures of the past, but the current culture is the most important.”

So … no. As Rodrique has explained, her people never ceded their land. Bundy can say “current culture” all he wants, but he clearly means “white culture,” and his prejudice speaks for itself.

The Malheur occupiers’ approach to history, just like their approach to the law, is outrageously wrong — but, at least so far, without much consequence. In the meantime, it’s putting the artifacts that help claim the Burns Paiute history into peril.