At the Paris climate talks, the rich and powerful work to stay rich 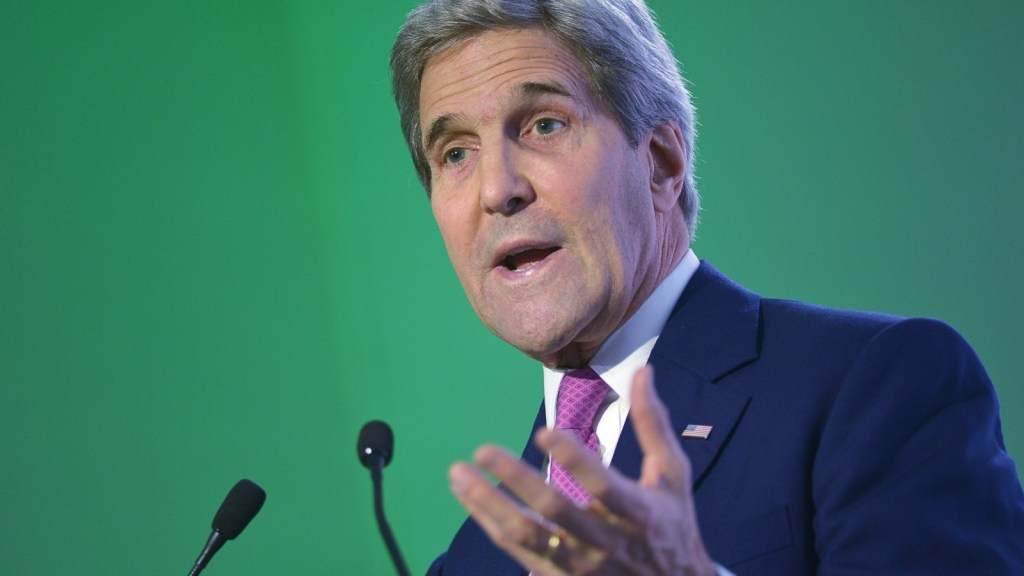 At the Paris climate talks, the rich and powerful work to stay rich

LE BOURGET, France — A couple days ago, I walked past the U.S. booth here at the climate conference. There was a panel going on featuring investors and company representatives from Facebook and Mars Chocolate, among others, producing my second-favorite quote of the conference so far: “Mars cares about climate change.”

The better quote came from Letitia Webster of the VF Corporation, the Greensboro, N.C.-based parent company of North Face, Timberland, and Jansport. She said: “Change is hard. I think there are a lot of businesses out there that are very scared about how they’re going to win in this new economy.”

Webster was answering a question about why some businessmen in places like the United States and the Arabian Gulf, and the politicians they fund, have their heads shoved so firmly in — uh, the sand — about climate change. But if you replace “businesses” with “pretty much everyone,” I think she may have explained the entire Paris 2015 U.N. Climate Change Conference.

I wrote about money on Tuesday. I’m writing about it again today, because it is that important to understanding what is going on, as the conference rollicks to what appears will be an unexpectedly amicable finish. If you’ve been following along, you know by now that poor countries want money to survive climate change. Rising economies want to know how they can make money. The richest countries want to know how they can keep the money they have and also make more. Corporations want you to give your money to them.

But there is a level deeper than that. Remember: Climate change, by definition, is going to affect every single system on Earth. One of those systems is commerce and trade. Another is politics. When a massive disruption happens to money and power in the hands of people we currently think of as winners, some of them might start to lose. And some people we currently think as losers might start to win.

This climate conference is the winners spending hundreds of millions of dollars to make sure they keep winning, in part by making sure that things don’t change so dangerously and fast that everybody loses.

That is why Google, 3M, Philips, Air France-KLM, two French Energy companies, and dozens of other corporate sponsors are helping cover the conference’s $185 million bill. It’s why nearly every president, king, chancellor, and prime minister not engaged in a civil war or named Kim Jong Un flew to Paris to speak for three minutes (give or take) on opening day. They are all people and institutions with a lot to lose — and maybe, they hope, a lot to gain. It all depends on how the future unfolds; if there’s a steady change, or a sudden disruption.

Wednesday’s big speech was by Secretary of State John Kerry. The State Department held it in the smallest of the three press conference rooms. I was one of a handful of journalists inside, all of us outnumbered by enthusiastic delegates and staff who began his speech with hearty applause and ended it in a standing ovation, and kept us boxed up in a way that ensured no one tried to shout a question. The organizers wanted the event to go exactly as planned — stable, free of surprises.

“Our aim can be nothing less than a steady transformation of a global economy,” Kerry argued, stressing the word. He looked at ease in a blue suit and pink tie, a tiny U.S. flag pin on his lapel. Kerry mentioned Goldman Sachs, Citigroup, Bank of America, and Bill Gates, to show that the most powerful and wealthy people in the country were spending money to survive and profit in a warmer world.

The goal in Paris, he said, was “not that we’re going to leave here knowing that everything we do is going to hit the 2-degree mark, but what we’re doing is sending the marketplace an extraordinary signal.”

“If we send the right signals — if we make the right choices — the private sector will deliver. Why? Because clean energy is not only the solution to climate change,” Kerry added later. “It’s also one of the greatest economic opportunities the world has ever known.”

That is not the way the climate change discussion is framed in the United States. But it’s where the conversation is headed. Last week, the governor of the Bank of England, Mark Carney, introduced billionaire Michael Bloomberg as the head of a new Financial Stability Board task force to help companies and financial markets adapt to global warming. Paris may signal the “end of the fossil era,” Ambrose Evans-Pritchard, the international business editor of the United Kingdom’s conservative Telegraph newspaper, wrote last week. Presaging Kerry with a bit more British candor, he said it would hasten a world in which “the new plutocrats will be masters of post-carbon technology.”

But how true that will be comes down to the modifier Kerry stressed: steady. Rapid change, to the climate or economy, will take things in a direction that no one can predict. Even some conservatives are coming around on the point that the Earth is warming, a group that includes Jeb Bush and even, shockingly, Charles Koch. What they still dispute is that the change will necessarily be catastrophic, or that changing our behavior in any way would affect it. And of course they don’t want to change. If we stop buying oil, they lose.

Kerry’s position was only slightly different: We’ll give up on fossil fuels over time — slowly, steadily — while transitioning to new energy technologies in which the United States will still lead the world. (China and India’s leaders are thinking the same thing, except they ride the wave of change to maintain control in their countries, and eventually take the Americans’ place.)

That interest in stability is probably why the major economies running this conference aren’t emphasizing emissions limits that would keep temperature increase at 2 degrees C over pre-industrial levels — much less the 1.5 degrees C that developing countries might actually get written into the final document as a mainly unenforceable goal. A major shift like that, they are likely imagining, would be very disruptive.

Just about everything you and I have today, we have because 11,000 years ago, the climate permitted humans to start practicing agriculture, and the delicate balance of life has continued to support the civilization that development set in motion. The danger is that, as the world warms, some key parts of that balance will change, too. That change might be happening steadily, as the world’s most powerful people hope. It might already be about to happen very fast. The truth is, we don’t know.