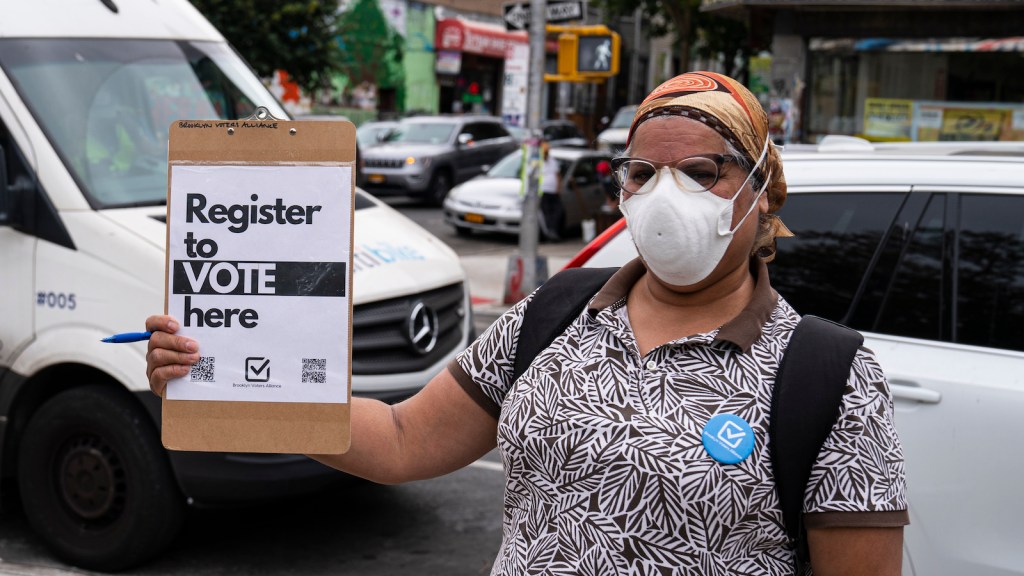 September 2020: A volunteer from Brooklyn Voters Alliance asks residents if they would like to register to vote. Robert Nickelsberg / Getty Images
op-ed

This story originally appeared in WURD and is republished here as part of Covering Climate Now, a global journalism collaboration strengthening coverage of the climate story.

It’s not only been a summer season (now autumn) of a deadly pandemic, toxic politics, and social unrest, but the nation has also been rocked by a nonstop series of environmental calamities triggered by the human-pressed climate crisis. Hurricane Sally was a destructive, slow-moving mix of high winds and epic flooding that battered the Gulf Coast and other parts of the South last month. That was after Hurricane Laura and ahead of an unprecedented number of cyclones forming in the Atlantic for what’s building up into one of the most active — if not the most active — hurricane season on record. The entire West Coast is either literally on fire or under a blanket of choking smoke. This summer was the fourth hottest on record, with nights no longer cooler and city neighborhoods burning up due to little shade, too little tree canopy, and still lots of pollution. Meanwhile, glaciers the size of whole states are rapidly melting in the global poles, raising sea levels and destabilizing weather patterns.

When these climate catastrophes strike in the United States, it is the nation’s Black people who are hit the hardest — while often lacking the resources and social mobility to confront them. More than a quarter of the Black population in the United States live in the Gulf Coast states constantly hit by hurricanes, not to mention the large concentrations of Black communities in other East Coast states hit by massive flooding. They’re also living in “urban heat island” spaces that are up to 20 degrees warmer than normal, making them twice as likely to die from heat than whites. Exposure to bad air and water quality are rampant in Black communities that are daily punished by environmental injustice by zip code. We’ll become more aware of this as fires throughout places like California and Oregon, for example, reveal high rates of permanent respiratory illnesses among Black people, especially those who do not have the economic means to move away from those areas.

This is all aggravated by an unmitigated blend of systematically racist designs and generations of redlined public policy. The coronavirus pandemic, which has disproportionately impacted and killed so many Black people in the United States, is one monstrous byproduct of the racist geographic burdens placed on Black communities. As researchers J.T. Roane and Justin Hosbey noted in their study Mapping Black Ecologies, “the ongoing reality [is] that Black communities … in the African Diaspora are most susceptible to the effects of climate change, including rising sea levels, subsidence, sinking land, as well as the ongoing effects of toxic stewardship.”

With Black people clearly on the front lines of climate crisis and environmental disaster (as victims and forced resistance fighters), it would seem natural for Black voters in the 2020 election to view the environment as a top issue. Indeed, Black voters could in many ways be the decisive eco-voters of the most high stakes election in American history — particularly as we consider the current Trump administration’s zealous hostility to and aggressive dismantling of environmental protections.

This election will decide the fate of the planet and human civilization because the outcome will decide the direction of policy to fix the damage done to our collective home. Environmental issues, in fact, seem to permeate as key context throughout every major racial injustice highlighted this past summer: It was the diabolical gentrification plans of real estate companies that ended up murdering Breonna Taylor in Louisville, Kentucky, as police were being used to methodically push out low-income Black residents for a redevelopment scheme. And there are redlining legacies in Minneapolis, Minnesota, and Kenosha, Wisconsin, that eventually led to the death of George Floyd and the paralyzing of Jacob Blake. Behind every headlining viral act of open racism is an intersection of environmental injustice. Will Black voters be making those connections as they mail ballots or show up at polling places?

It’s not clear at the moment. A recent Economist/YouGov survey found 33 percent of Black voters (by far the highest of other groups polled) were not sure if “the world is becoming warmer as a result of human activity,” but a higher percentage (47 percent) believed that the severity of recent hurricanes and wildfires is increasing. Yet, Black voters were also the most likely to say (75 percent) — out of all demographics — that climate change and the environment were either “very” or “somewhat important.” Interestingly enough, an August 2019 poll from Quinnipiac found Black voters split on whether it was an emergency, with 44 percent saying it was not. But in the recent YouGov poll, that issue ranked fifth among Black voters (at 8 percent) out of the 10 most important issues, with health care at the top (35 percent).

With polling of Black potential or eligible voters notoriously incomplete (since political polling firms are overwhelmingly led by white men), it’s hard to determine the size of the Black eco-electorate: or rather, that portion of the Black voting community that is mobilized by environmental issues, including climate change and pollution. What we do know is that Black people, generally speaking (and based on the polling data we have to work with), have an enormous amount of situational awareness on these subjects. Of course, it bothers them: As the Yale Program on Climate Communication found, “Hispanics/Latinos (69 percent) and African Americans (57 percent) are more likely to be alarmed or concerned about global warming than are whites (49 percent). In contrast, whites are more likely to be doubtful or dismissive (27 percent) than are Hispanics/Latinos (11 percent) or African Americans (12 percent).”

The issue, however, is around mobilization. Is this a key issue prompting outrage and a related rush to the polls among Black voters? Are there large segments of the Black electorate moved by issues around the climate crisis, toxic air, and water, or demanding dramatic policy changes such as clean energy infrastructure and the expansion of a “green economy” that creates jobs and Black startups? The recent Yale survey shows 36 percent of Black respondents willing to “join a campaign” to address climate change (versus 37 percent of Latinos and just 22 percent of whites). When asked if these issues would significantly influence their decision in the 2020 election, 60 percent of Black voters surveyed ranked “environmental protection” as their 11th top issue out of 29 top issues listed and 53 percent ranked “global warming” as their 16th top issue — that’s impressive compared to just 44 percent and 35 percent of whites, respectively, on the exact same issues.

“Research suggests that people of color may be more concerned than whites about climate change because they are often more exposed and vulnerable to environmental hazards and extreme weather events,” reported the Yale survey. “One particularly important example is that people of color are more likely than whites to be exposed to air pollution. Inequitable exposure to environmental problems such as this may also explain, at least in part, why Hispanics/Latinos and African Americans report greater intentions to engage in climate activism.”

What we’re seeing in the Yale survey (which was conducted in 2019 before the pandemic hit) is that Black voters are, potentially, more activatable on environmental health and climate crisis than white voters. Yet the mainstream news, discourse and protest around eco-issues is steadily focused on white concerns and white conversation. Even during the early months of the pandemic — as necessary stay-at-home lockdowns placed major burdens on vulnerable Black families and households confined to smaller spaces and densely populated locations with increased risks of infection — mainstream local news and cable coverage too often focused on the comparably minor inconveniences faced by white middle class families. We typically hear little, if at all, about Black household or neighborhood burdens when climate disasters such as hurricanes at the Gulf Coast and wildfires consuming the West Coast take place.

Yet Black people do understand that they are prime targets of zoning and redlining decisions that push them into pollution zones, and they know their families are suffering from high rates of chronic illnesses such as asthma and cancers that are directly correlated to pollution and climate change impacts. They also understand, such as the case with Hurricane Katrina in 2005, that they frequently find themselves the least unprepared for and most economically displaced by climatic disasters. Black communities also instinctively realize that as the climate crisis intensifies, the racism of scarce resources and space will get worse. But as a July focus group survey by Third Way of Black communities in Detroit, Philadelphia, and Greensboro, correctly noted, “even though they’re concerned about the environment worsening around them, Black Americans aren’t necessarily counting climate change among their top priorities — and they’re not hearing people speak to them on the issue in a manner that resonates.”

Environmental advocacy movements often express frustration over the public’s inability to put electoral pressure on policymakers about issues such as climate change. Maybe it’s because they’re not really talking to Black voters about it, or investing the time and money it takes to do just that.