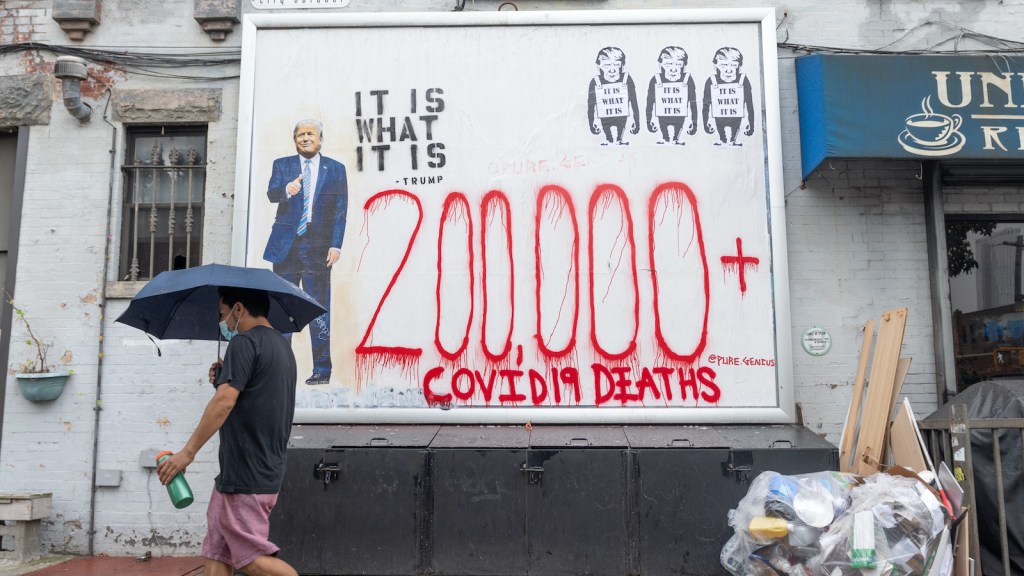 Well, it happened. After months of downplaying COVID-19 (“It’s like a miracle, it will disappear!”) and repeatedly refusing to wear masks at public events, President Donald Trump and first lady Melania Trump have tested positive for the coronavirus.

The implications of this news include more than a mere “I told you so.” Trump has fallen ill with a potentially deadly virus just weeks before Election Day, and in the midst of a global pandemic, record-breaking wildfire and hurricane seasons, and a growing national reckoning with racial violence.

The president’s diagnosis has also laid bare a rift in his persistent anti-science strategy of deny, deny, deny: It’s a lot harder to ignore a crisis — be it the severity of COVID-19 or the catastrophic dangers of climate change — when reality slaps you in the face.

We asked three Grist reporters whether they think Trump might start taking these science-backed threats more seriously after personally experiencing one of them firsthand.

It’s hard to imagine a version of Trump that doesn’t lean so heavily on denial. He’s repeatedly called climate change a “hoax” and compared COVID-19 to a “bad flu season.” He denies institutional and political norms, indicating he might refuse to accept the outcome of the November election, and he’s baselessly sown doubt over the voting process.

But denying something doesn’t mean it can’t come back and bite you. After years of ignoring climate change, Trump suddenly found himself forced to answer questions about the overheating planet during Tuesday’s Democratic debate; he was unable to deflect or rely on his usual talking points, making it one of the sanest moments in an otherwise hellish evening.

When I first heard about Trump’s positive test, I wondered if the illness would change the president’s response to the coronavirus crisis. After all, Boris Johnson — the conservative prime minister of Britain who has drawn frequent comparisons to Trump — contracted COVID-19 in March and spent three nights in the ICU. After he was released, Johnson’s approach to COVID-19 changed; he adopted a more sober tone when addressing the country and maintained strict lockdowns across the U.K. Then again, when Jair Bolsonaro, the far-right president of Brazil, developed COVID-19 in July, his relatively mild case only entrenched his stance that the virus was nothing to worry about.

Personal experience can change minds. We’ve seen this with climate change: As the country is bombarded by wildfires, hurricanes, and record-breaking heat waves, more and more Americans have come to believe that global warming is happening. Last month, when the West was on fire and the skies had turned orange, I talked to several Americans who felt they were witnessing climate change happening in real time.

But worldviews are sticky; it can take more than a bout of illness or even a catastrophic wildfire to make someone give up a deeply held belief. Trump has indicated over and over that he would prefer to minimize the devastating death tolls from COVID-19 and the damage wreaked by climate change. If his case of COVID-19 is mild, he may very well return to his old, flippant attitude. For the millions of Americans who have already lost friends and family members to the disease — and the millions more who will suffer if global warming continues unabated — that’s no comfort at all.

The luxury of denial

President Trump has promoted both climate and COVID-19 denial. He organized rallies for his reelection campaign at indoor venues with few masks in sight. On Thursday, he held a fundraiser at his golf club in New Jersey despite knowing that Hope Hicks, a senior advisor, had recently tested positive for the virus.

Trump’s past behavior — and now, his high-quality treatment options — speaks to the enormous amount of privilege he possesses. Unlike the Black and Latino Americans who have disproportionately been hospitalized and have disproportionately died from COVID-19 this year, the president has access to the nation’s best doctors and expensive treatments. He was transferred to Walter Reed National Military Medical Center on Friday afternoon, and he’s already received an experimental antibody treatment called Regeneron. Trump has had the resources to bankroll his reckless choices, with access to regular testing, multiple properties tailor-made for social distancing, and high-quality healthcare.

The lines of people wearing masks waiting for treatment outside of Elmhurst Hospital in Queens, New York, which was for a time the worst-hit borough in the worst-hit city in the world, made headlines earlier this year. Black and brown New Yorkers from neighborhoods with higher rates of air pollution were more likely to die from the virus. Unlike the President, these New Yorkers didn’t have access to regular testing. And many of them were essential workers who didn’t have the option to hunker down and work from home during lockdowns.

Puerto Rico, the island colony Trump considered “selling” after Hurricane Maria destroyed it, has experienced almost 50,000 cases and more than 670 deaths from COVID-19. With its infrastructure still fragile after the devastating 2017 hurricane season, Puerto Rico has faced a series of earthquakes, water shortages and rationing (thanks to climate change–induced droughts), and a record-breaking hurricane season this year. For the more than 40 percent of Puerto Ricans living in poverty, it’s not possible to leave when there’s no running water or when COVID-19 cases spike nearby.

Puerto Rico and “inner city” neighborhoods in New York City did not have the option to pretend that COVID-19 wasn’t a real threat, just as they don’t have the option to pretend that climate change and pollution aren’t real threats. The virus just showed up, and now there will be empty seats at kitchen tables, empty spaces on the front stoop, and empty pews in our places of worship.

When you think about how every mundane activity — getting to work, eating breakfast, taking a shower, charging your cell phone — contributes to the warming of the atmosphere and the slow demise of a habitable planet, it quickly becomes preferable to avoid thinking about it ever again. How can you live when every action you take might inflict harm?

Living with COVID-19 requires accepting a similarly unthinkable truth: Every interaction with another human has the potential to kill you or them. Of course that’s hard to stomach! It changes your daily life, your relationships, your connection with the world!

Climate change and the COVID-19 pandemic are both massive collective problems that require you to change how you consider the world. You can’t just think about yourself anymore; you have to think about the wellbeing of immunocompromised people or future generations or the elderly or people living in Bangladesh or the person serving your coffee who would very much like you to pull your mask over your nose. You are asked to sacrifice comfort for the greater good.

I think you will find some heavy overlap between the people who flaunt their 8-mile-per-gallon trucks while the entire West burns and the people who gallop through the aisles of Target, screaming at other customers to take off their masks, while some family somewhere observes the 200,000th COVID-19 funeral. They’re in denial that the way of life that brings them comfort has consequences for others, and furthermore, that it’s approaching extinction.

Donald Trump has made his entire presidential career, such that it is, on promising that no one will ever have to change. He celebrates an outdated, irrelevant, thoroughly solipsistic worldview that is appealing to enough people that it might secure him another four years in office. He has made a career of celebrating selfishness, and now he has COVID-19.