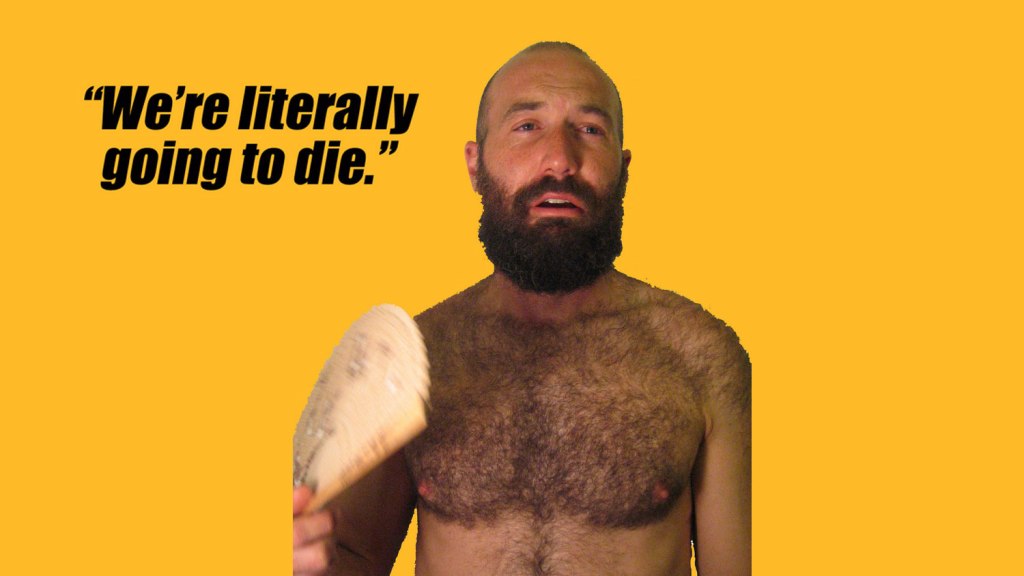 Have you ever wished there was more talk of climate change in national politics? Have you ever sat through a dull, paint-by-numbers political debate and secretly wished for an over-the-top, maybe even kind of loopy person to show up and take the whole conversation off-script?

If so, then prepare to get excited about the very strange U.S. Senate campaign of  California’s Mike Beitiks.

Barbara Boxer’s decision to step down from her Senate seat in 2016 has brought a host of potential contenders for her seat. (California Attorney General Kamala Harris and U.S. Representative Loretta Sanchez are believed to be the current frontrunners.) But only one candidate, Beitiks, promises to talk about absolutely nothing but climate change. His campaign photos have captions like, “We’re literally going to die” and “Why aren’t we all screaming?”

I run for Senate on a narrow platform. It’s more of a single board, really. If elected, I promise to monomaniacally create and support legislation that combats climate change.

This is not some sort of henny-penny scheme. It’s about realistic assessment and hard work.

Literally nothing else will influence my decision-making and my political dealing. I will use the power of the law to brutalize the most brutal climate offenders and smack some sense into all of us.

It will be a rough job, no doubt, but it can’t be that much rougher than going about my business like an ignorant sham of a man, willfully blind to the fact that my kids will come of age in an apocalyptic wasteland of our own making.

I will be the first to admit that I’m not a perfect candidate. I’m barely qualified, and a survey of my personal history will undoubtedly expose me as an embarrassment to myself in almost every regard that does not include this singular act of rationality.

That last bit doesn’t seem to be quite true. Beitiks may be the only Senate candidate with a topless photo of himself on his website. (I think he’s illustrating the perils of global warming?) But he also has a law degree from Hastings, a well-respected law school in San Francisco. He passed the California bar and generally seems to be a pretty smart guy, with a more wide-ranging interest in public policy than his campaign website would suggest.

That said, his climate policy suggestions, while creative, are going to be a tough sell:

• Withdraw military from Middle East. Deploy military in people’s driveways to make sure they’re not taking unnecessary trips, driving when they could be walking, etc …

• Everyone has to breathe more shallowly.

•  Let’s just say that if you want to have a child, you have to plant twenty trees, too. If your kid dies you get to chop down one of the trees as a sort of grieving ritual, but the rest stay.

Would I vote for the guy? The trees thing does have a certain poetry to it. At the very least, I’d like to see Beitiks make it to the debates.