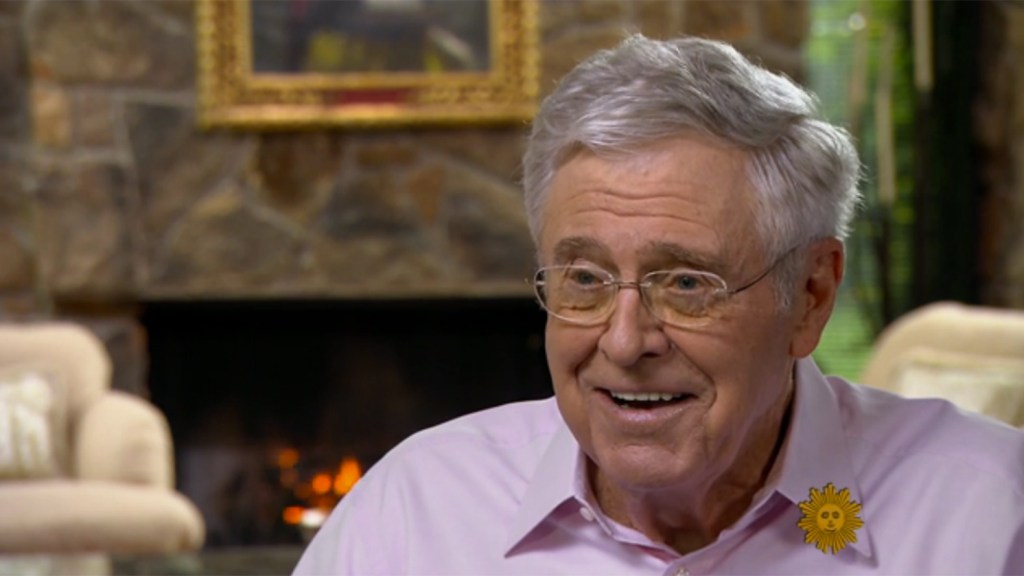 He looks a little bit like your favorite grad school philosophy professor. He’s got a full head of gray hair, a strong, guileless smile, and socks that don’t quite match. He’s been married for 40 years and seems like a family man, deeply devoted to the ideals instilled in him by his father. He talks about hard work and good jobs and fighting against the powers that be. No, I’m not talking about the produce buyer at the Park Slope Co-Op. I’m talking about Charles Koch.

During a rare interview on CBS Sunday Morning, Charles Koch, the sixth richest man in America, tried extremely hard to win your sympathy. Speaking with reporter Anthony Mason, the billionaire industrialist emphasized his dedication to democracy and the political process. “To get rid of these special interests,” Koch said, “that’s the whole thing that drives me.”

Mason, showing immense willpower, didn’t even roll his eyes. “Do you think it’s good for the political system that so much what’s called ‘dark money’ is flowing into the process now?,” he asked Koch.

“First of all, what I give isn’t dark,” said Koch. “What I give politically, that’s all reported. It’s either to PACs or to candidates. And what I give to my foundations is all public information.”

HA! The reason PACs exist in the first place is to funnel money to political campaigns without disclosing where it comes from, and Koch, according to CBS, will spend some $300 million on the 2016 campaign. THREE HUNDRED MILLION!!! The Koch brothers’ spending rivals that of the Republican National Committee, and much of it will be funneled through tax exempt PACs and advocacy groups.

“But do you think it’s healthy for the system that so much money is coming out of a relatively small group of people?,” Mason asked the very rich man.

“Listen, if I didn’t think it was healthy or fair, I wouldn’t do it,” Koch replied. “Because what we’re after is to fight against special interests.”

Hmmm. That seems curious considering the Kochs are special interests. And unless you too are a billionaire industrialist, their interests probably go against yours. They have attacked clean energy, climate action, and environmental regulations, and paid bribes to win contracts. On Keystone alone, they stand to make $100 billion if the pipeline is approved. Yes, billion. And that, folks, is what you call a “special interest.”

But Charles Koch doesn’t want you to see him as just another billionaire oligarch shopping for a president to call his own. He wants you to see him as human — as a victim, even. “I get a lot of death threats,” Koch told Mason. “I’m now on al-Qaeda’s hit list, too. So that’s really getting into the big time. Gets pretty scary.”

Much like the prospect of a Koch-backed president winning the election. Alas Koch is undeterred by death threats. “I decided long ago, I’d rather die for something than live for nothing,” he said on CBS Sunday Morning. Well, at least there’s one thing we can agree on — we’d rather you die for something too, Mr. Koch. Anything, really, at all.