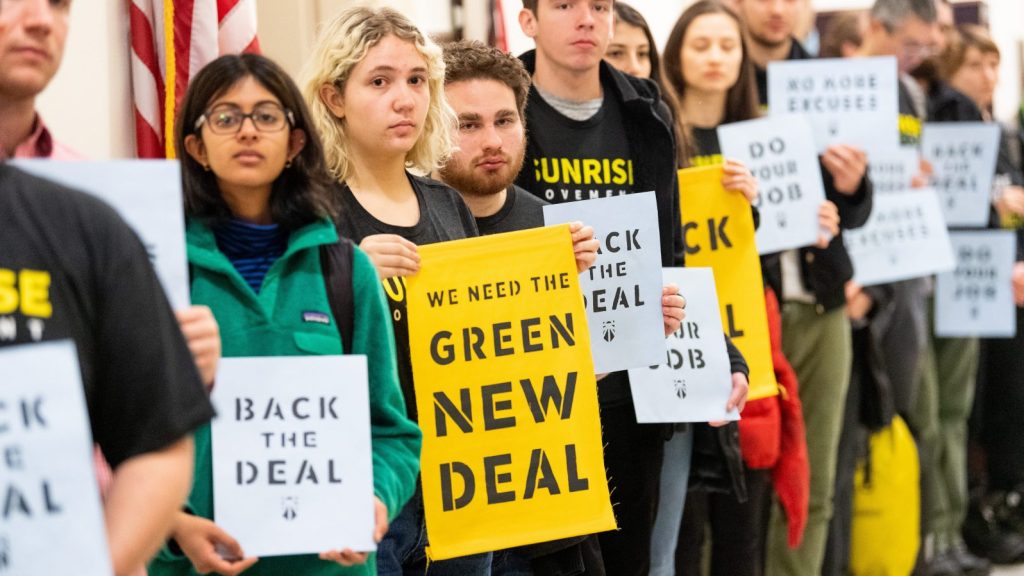 Climate change is finally having a political moment. That’s no accident.

In November 2018, I was enjoying a post-midterms vacation when I saw the news: Six days after Democrats had taken back the House, a scrappy group of 150 young people staged a sit-in at Minority Leader Nancy Pelosi’s office because they weren’t convinced by her pledge to push forward on climate change legislation. The hours-long protest might have been a forgotten blip in the news cycle — if progressive star Representative Alexandria Ocasio-Cortez hadn’t stopped by. Her cameo set off a chain of events that meant, by the time I returned to D.C., there were teenage and twentysomething activists everywhere in black T-shirts emblazoned with a symbol of a rising sun. They called themselves the Sunrise Movement, and they were calling for an ambitious bundle of climate legislation known as the Green New Deal.

At first, I was skeptical that these young people deserved the hype. They tended to slip into a dizzying patois of activism theory — during one phone call, I heard one Sunrise member cheerfully cite Martin Luther King Jr., Ella Baker, and civil rights academic Charles Payne in one breath. But over the course of the past year, I’ve noticed a sea change in the climate movement. The older white men who still lead the national environmental groups have started to give way to a much younger, more diverse, more in-your-face set of activists with their own set of leaders, like the teenage Swedish climate crusader Greta Thunberg.

This revitalized climate movement isn’t a fluke. Sunrise leaders say their secret sauce is a relatively new organizing strategy called Momentum, which teaches activists how to keep a movement growing instead of fizzling out after a few splashy protests. The Momentum approach has also influenced the Black Lives Matter movement and the immigration rights group Cosecha, as well as new climate groups like Extinction Rebellion, and some older ones like 350.org. For Sunrise, which claims 15,000 members in 200 hubs across the country, the strategy seems to be particularly effective.

Varshini Prakash, the 26-year-old executive director of Sunrise, thinks the Capitol Hill sit-in would have unfolded very differently without Momentum’s forward-thinking strategy. “When these big moments happen, like you sit in Nancy Pelosi’s office and there are 5,000 articles written about climate change in the next two days, what do you do with that moment?” she said. “Do you say, ‘Wow, that was awesome — let’s pack up and go home,’ or do you say, ‘How do we use this moment to drive thousands and thousands of people toward our organization and create a leadership pathway?’”

Momentum theory grew largely with the help of two brothers from Iowa, Mark and Paul Engler. A writer and a community organizer, respectively, the Englers were frustrated with social movements’ lack of staying power. In 2013, they began developing an approach based on the modern history of civil resistance, from Dr. King to Occupy Wall Street and the Arab Spring. “Many of the founders of Momentum, including me, have had the experience of living through a cycle of mass protest, with its exhilarating peaks, and then experiencing its failure or collapse,” Paul Engler told me. That inspired “a long process of trying to figure out what happened and analyzing how to do it better.”

The Englers came up with a set of principles for organizers: Devise a clear narrative for what you want to accomplish from the start, then think about your work in a cycle of “escalation” — attracting a wider base largely through rallies and mass protest — and “absorption” — in-person trainings and call-in sessions, where eager new members can become more effective soldiers in the fight.

Many of the Sunrise Movement’s founders, including Prakash, attended the first Momentum trainings in New York in 2014 and 2015. They came up with the idea for Sunrise and spent nearly a year planning before officially launching it in 2017. They decided to focus on motivating youth: Young people have a good track record of challenging the status quo. But more importantly, the threat of climate change feels particularly acute to young people — without immediate action, the environment will profoundly change in their lifetimes. Sunrise’s leaders also decided to focus on pushing Democrats on climate policy; trying to convince Republican lawmakers to accept the science seemed like a poor use of precious time and resources.

Since those early days, the group has pulled off a handful of successful escalations — protests, school strikes, and confrontations with top Democrats whose climate policies they deem too timid. After each of these actions, Sunrise leaders have swooped in to set up recruitment drives and more trainings for new members. That last bit, according to Momentum principles, is key: Other movements often consider a successful protest the last step. For Momentum, it’s just the beginning.

In September, I went to Philly to see Sunrise in action at a gathering of Green New Deal supporters. After seven hours of climate speeches, the crowd of college students and other young adults, along with veteran organizers, all cooped up in an auditorium at the University of Pennsylvania, was restless. Even the most committed were ready to call it a day — until Prakash took the mic.

The daughter of South Indian immigrants, Prakash wore her long hair loose and moved confidently around the stage in jeans and a green canvas jacket. She described Sunrise’s vision for a radically different climate movement. The world desperately needs “a militant force of young people,” she said, to prevent the type of dystopian future that feels imminent to her generation. “I spent my college years imagining what kind of bunker we would all need to create to shield ourselves from a militarized band of bandits that were out because the government just collapsed and all of society was in ruin,” she said.

After the conference, Prakash reflected on Sunrise’s rapid growth over the past year. “Every time we would do something really big, we would have a mass call where thousands of people would join, understand what Sunrise is, what the next action is,” she said. After Sunrise’s Kentucky hub targeted Senate Majority Leader Mitch McConnell with protests recently, 1,000 people joined one of its organizing calls, and 700 of them agreed to do a congressional office visit in their hometown. One of those visits was to Senator Dianne Feinstein, which resulted in a viral video of the California Democrat haughtily dismissing the Green New Deal, saying, “There’s no way to pay for it.” Yet by February, 11 senators and 67 House representatives, including every senator running for president, had endorsed a symbolic resolution in support of the bill. (By early November, that number had grown to 109 total.)

So far, Sunrise hasn’t figured out how to channel its energy into actually passing climate legislation. The group “put it on the agenda, they’re driving a ton of alignment, and all that is impressive,” said one activist, who didn’t want to be named while criticizing the organization. But, he continued, “The scale we need to win it is going to transcend Sunrise.”

There’s not a lot of time. When Sunrise members say there’s only a decade to act, they’re not exactly right — ­climate change doesn’t work like an on/off switch. Rather, the impacts escalate the longer we delay. But they are correct that the next 10 years is a critical window for action. Sunrise leaders have made big plans: In 2020, they aim to sweep a Democrat into the White House who will tackle global warming, spurred on by what Sunrise hopes will be the largest youth strikes in U.S. history in 2021.

Onstage in Philadelphia, Prakash was aware of how impossibly idealistic all this may sound. “We’re working on it,” she quipped with a self-deprecating laugh. She invited everyone to stand and join her in a singalong of “Anthem” by Leonard Cohen. “There is a crack in everything,” the crowd sang. “That’s how the light gets in.”