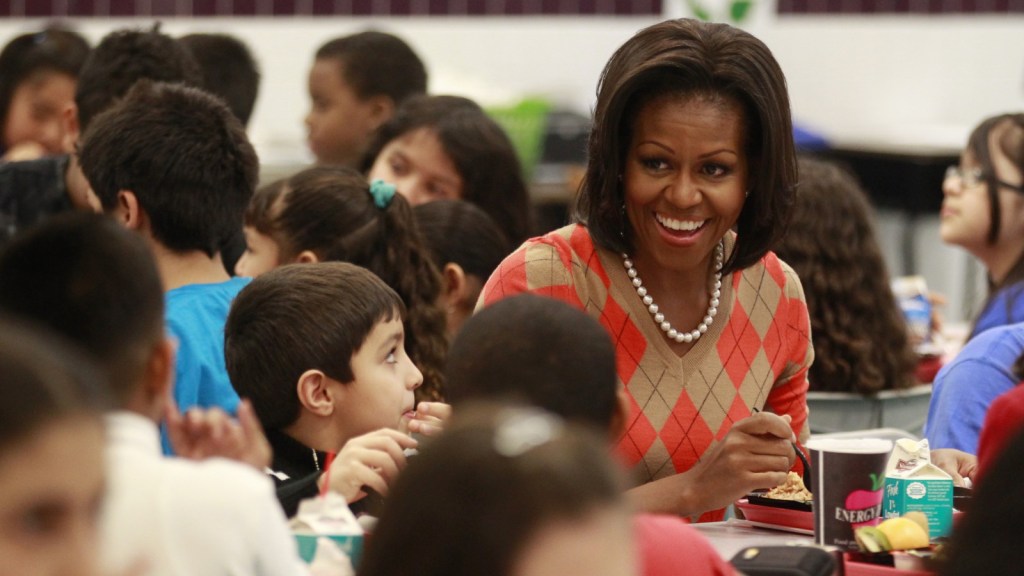 Sept. 30 was the deadline for Congress to reauthorize the Healthy, Hunger Free Kids Act — the school lunch law. Congress didn’t do so. Here’s what that means, why it matters, and what could happen next.

What is this law?

Legislators concerned about obesity and hunger passed the Healthy, Hunger Free Kids Act in 2010. It amended the original school lunch law from 1945, providing more money for food and setting stricter nutritional standards. It also provided some support for schools to tap into local food systems.

Michelle Obama and the School Nutrition Association — a group representing cafeteria workers and school lunch coordinators — championed the bill. But the SNA and Obama have turned from allies to foes as they differed on interpreting the law’s mandates. The SNA has said that the law’s requirements for reducing salt and increasing whole grains are so strict that some kids have stopped eating the lunches, while Obama’s team has argued that we need to take bold steps to improve America’s diet.

Congress blew past the deadline — what happens now?

Nothing! The funding for the existing programs will continue, and the deadlines for meeting the law’s requirements will stand as they are. The reauthorization deadline is basically a reminder to lawmakers that they should look closely at the school lunch program and see what needs to be done. But both the SNA, and the various food advocacy groups I talked to, want a reauthorization, and see it as an opportunity to increase funding. If this pinchpenny Congress doesn’t go for that — or does nothing, which is its favorite answer to all questions — then the law just stands as is.

Why does this matter?

Feeding kids is a way to fight poverty and reduce the burden of food-related disease on the nation’s and our households’ budgets. In 2012, diabetes cost U.S. residents $245 billion, and the cost of obesity was estimated at $168 billion in 2010. (For comparison, the federal government spends about $140 billion a year on science, research, and development of new technology.) Without good food, kids get diet-related diseases, and they don’t learn as well. This has alarmed both business leaders — who want well-educated employees — and military leaders. In a document called “Too Fat To Fight,” a group of retired generals has argued that diet-related disease is hurting the country’s armed forces.

Now, it’s easy to make the case that something needs to be done to reduce diet-related disease. It’s harder to argue that the Healthy, Hunger Free Kids Act is that something. But the general idea looks right on paper: The evidence suggests that if we want to trim America’s waistline, we can forget about the gluten-free fad and concentrate on getting healthy food to the people who might not otherwise eat it.

Will we get a reauthorization?

On the one hand, it seems unlikely that the current Congress will do anything. On the other hand, maybe the fact that lawmakers are refusing to collaborate on other bills will force them to search for something that they can find some kind of bipartisan agreement on.

“This is one of the last bipartisan issues. And, especially for a new Speaker [of the House] going into a difficult year, I think it behooves Congress to work on an issue that benefits thousands of kids in every district,” Ellen Teller, director of government affairs for the nonprofit Food Research and Action Council, told me.

One draft proposal would provide money so that needy kids in pre-schools more than eight hours a day could have two snacks and a lunch (right now the government pays for one snack and a lunch). There are also efforts to make it easier for kids to get food over the summer. Teller would like to see some simple fixes to reduce the amount of paperwork kids need to get these benefits, and that organizations need to do to provide them. Groups like the SNA and the National School Boards Association want more wiggle room in the nutritional guidelines, and more money to improve food service.

Republicans and Democrats are working together on most of the ideas proposed for the reauthorization. The one sticking point is the question of whether to dial back the nutrition standards. And it’s not all the standards: There are just a couple of very specific challenges that the school nutrition people are having with salt and whole grains.

Rhonda McCullick, the director of food service operations for the Park Hill School District in Missouri, told me that her kitchens went to 100 percent whole grains initially, but when they saw that kids stopped eating certain foods, they dialed that back. Now they use white flour for breadsticks and for rotini; all the other breads and pastas are whole grains. When it comes to salt, Park Hill is meeting the requirements, but those requirements are slated to tighten. “Our ninth to twelfth graders get less than 1,420 milligrams of sodium a day. That is probably lower than you eat at home unless you are on a low-sodium diet,” said McCullick, who is also a dietitian. “We are at a very healthy and good level.”

There’s always a lot of dispute about what is healthy when it comes to diet — it’s just not an exact science. But Teller points out that the Institute of Medicine, a highly respected body, set the recommendations. “The Institute of Medicine is the entity that decides, and the USDA implements, and I think that’s how it should be,” she said. “Not Congress inserting its will.”

A different way of thinking?

So far, the debate over this act has made it look like a zero-sum game: Do we make it easier for the schools and jeopardize childrens’ health? Or champion health and force schools and kids to bite the bullet of whole-wheat breadsticks?

But a recent piece in the New York Times suggested that it might be possible to have a little more flexibility in the foods that schools serve children, and improve health at the same time. Kate Murphy, the journalist who did that analysis, wrote:

Consider that in France, where the childhood obesity rate is the lowest in the Western world, a typical four-course school lunch (cucumber salad with vinaigrette, salmon lasagna with spinach, fondue with baguette for dipping and fruit compote for dessert) would probably not pass muster under the Healthy, Hunger-Free Kids Act, because of the refined grains, fat, salt and calories. Nor would the weekly piece of dark chocolate cake.

Instead of pushing strict compliance, perhaps schools should take a page out of France’s book and teach moderation, while giving students more time to enjoy their food, Murphy suggests.

America’s school lunch programs have already improved a lot, and at this point we are down to some relatively small sticking points. If there were any room for compromise on the act’s targets, it might allow a reauthorization bill to pass.