Democrats flip the Senate -- illuminating a path forward on climate 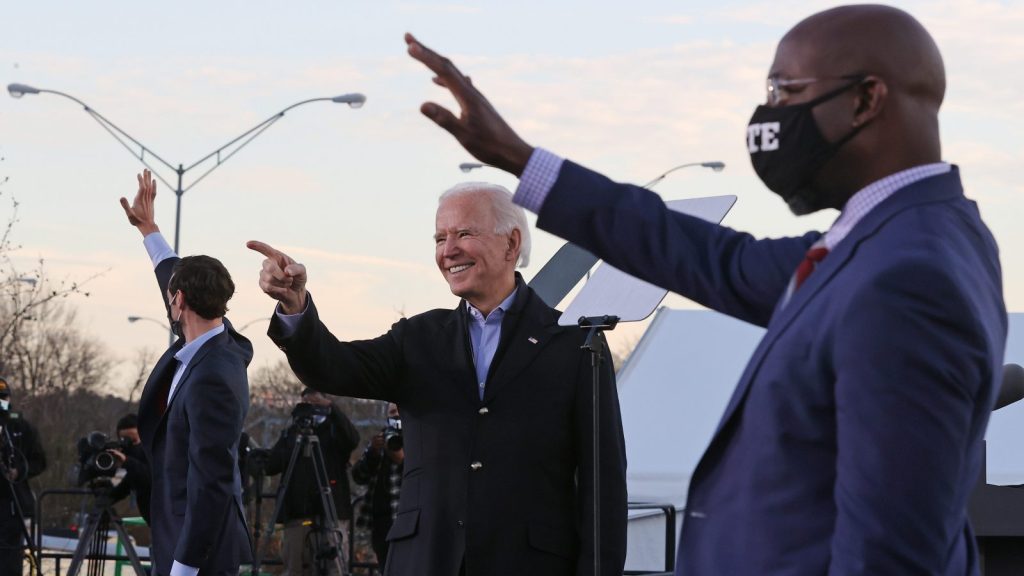 Democrats flip the Senate — illuminating a path forward on climate

The 2020 general election is finally over, more than two months after it began. The votes from two runoffs in Georgia, triggered in November after no candidate in either race managed to clinch 50 percent of the vote, are done being tallied.

What initially looked like a disappointing down-ballot election for Democrats — the party lost about a dozen House seats and saw faint prospects for wresting the Senate from GOP control — has been turned upside down by the Georgia runoff results. Democrats now have a trifecta: control of the House, Senate, and White House.

Just after 2 a.m. Eastern time, the Associated Press declared the Reverend Raphael Warnock, a Democrat, as the winner in the special election to finish Republican Johnny Isakson’s term. He prevailed over Kelly Loeffler, who had been appointed to the seat early in 2020. In the other Senate race, the AP reported at around 4:15 on Wednesday that Democrat Jon Ossoff narrowly defeated incumbent David Perdue. The results give the Democrats a de facto majority in the Senate and are a big boost to the Biden presidency and legislative agenda.

It was clear a couple of hours after polls closed on Tuesday night that Warnock, leader of the Ebenezer Baptist Church and an environmental justice advocate, would emerge victorious. Warnock will be the first Black senator from Georgia. He began his live-streamed victory speech by reflecting on his mother Verlene’s recent voting experience. “The 82-year-old hands that used to pick somebody else’s cotton went to the polls and picked her youngest son to be a United States senator,” Warnock said.

Ossoff’s path to victory looked murkier on Tuesday night. For hours, Perdue and Ossoff were locked in a dead heat. But overnight, Ossoff pulled ahead of Perdue by a little less than half a percentage point. The Democrat continued to outpace Perdue on Wednesday morning, as votes from blue Atlanta and its surrounding suburbs, as well as absentee and provisional ballots — both of which tend to lean Democratic — were counted.

So, what does this mean for the future of climate policy in this country?

The short answer is: a whole lot. With Vice President-elect Kamala Harris acting as the tie-breaker in the 50-50 Senate, Biden will have an easier time confirming his cabinet nominees — people like Representative Deb Haaland of New Mexico, who is poised to become the first Native American cabinet secretary in U.S. history. In the short term, Democrats will be able to force votes on key issues, like COVID-19 relief checks and other economic stimulus measures. In the longer term, if the progressive and moderate factions of the House and Senate can work together, Biden may be able to make good on parts of his $2 trillion climate and infrastructure plan.

There’s reason to believe that both Ossoff and Warnock will support Biden’s green initiatives. Ossoff ran on a platform that included a sweeping infrastructure plan similar to the one Biden championed on the campaign trail. That plan proposed funding for clean energy, energy efficiency, and jobs in the renewable energy sector. Warnock believes that “the Earth is the Lord’s,” according to his website, which lays out his support for a clean energy transition, environmental justice, and stewardship of the natural world. Both are proponents of rejoining the Paris Agreement and reversing Trump’s environmental rollbacks.

Still, Democratic control of the Senate will be narrow and tenuous. Progressive Democrats will have to compromise with their moderate colleagues in order to get bills passed. And the opposing party tends to win big in midterm elections, which are just two years away.

Can Biden ram through meaningful climate legislation before the clock runs out? The results in Georgia definitely increase the possibility that he could.