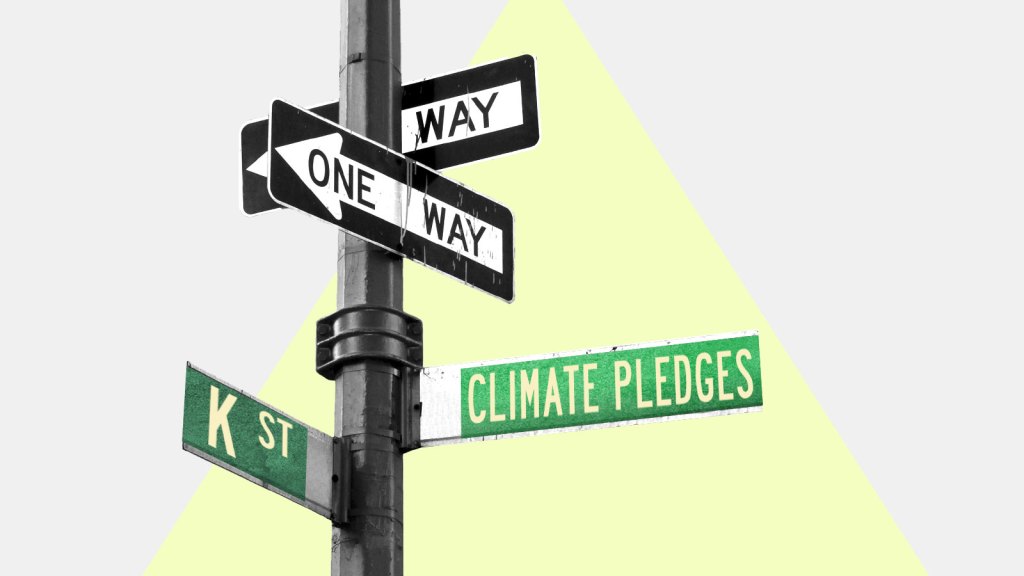 For nearly a decade, Senator Sheldon Whitehouse, a Democrat of Rhode Island, has been beating the bushes to find Republican partners on climate legislation. When asked to explain why his GOP colleagues have been so resistant to join him in taking action on climate change, Whitehouse doesn’t point to the usual suspects: President Donald Trump, donors like the Koch Brothers with a rooting interest in fossil fuels, or the influential Heartland Institute.

Instead, he points to corporations, and not just the fossil fuel firms that you’d expect, but woke tech companies like Google, which is working to power every search with carbon-free energy,  along with other giants like Coca-Cola, which aims to quash a quarter of emissions from its entire supply chain.

The same companies touting their efforts to go “net zero” are silent on the issue when lobbying Congress, according to Whitehouse. The result is that there’s no counterweight to oil and gas lobbyists able to influence Republicans, no big businesses clamoring for members of Congress to take on climate change. Whitehouse has had some success in reaching across the aisle to pass small bipartisan bills, but he keeps bumping into the same barrier: Corporate lobbying was all on the side of inaction.

“When you got one team not even showing up on the field, and the other team is out there with their massive dark-money cudgels threatening to take the head off any Republican who crosses them, that is a very important background to where we are,” he said. “That’s the reason we have to do so many small bills rather than biting the bullet and tackling this problem while it is still possible.”

It’s a situation that green-friendly big businesses have the power to change, Whitehouse said.

What do these companies have to say for themselves? Very little. Grist reached out to Google, The Coca-Cola Company, Pepsico, Apple, and a handful of other businesses and trade associations that Whitehouse called out. Only three responded. A representative from Apple didn’t address the lobbying question directly but pointed to the company’s most recent environmental progress report. “We have spoken clearly and unambiguously: across different forums, in public statements and closed-door discussions, and through our actions,” the report says. “Whether making known our support for the United States upholding its obligations under the 2015 Paris Agreement or backing a price on carbon, we’re pursuing strong policies that promote decarbonizing our economy.”

Walmart’s vice president for federal government affairs, Bruce Harris, responded in an email that the retail giant was one of the first big companies to adopt climate targets back in 2016, and that it had signed on with We Are Still In, a large coalition of businesses and local governments supporting the Paris climate agreement, and America’s Pledge on Climate Change. Harris also pointed out that Walmart’s CEO, Doug McMillon, is the chair of the Business Roundtable, an advocacy group for corporate leaders, which recently called for “a national climate policy solution to reduce U.S.-based emissions in accordance with the Paris Agreement and by at least 80 percent by 2050, through a market-based mechanism that includes a price on carbon.”

A representative from Coca-Cola sent a statement saying that the world needs to dramatically reduce emissions and that it’s “supportive of effective and well-designed policies and mechanisms that would help make this happen.” Coke is also part of We Are Still In, which recently published an open letter to the incoming Biden administration urging action on climate change.

But there’s a big difference between making a public declaration and pushing members of Congress to pass legislation. The Environmental Defense Fund has been tracking these corporate declarations with its Climate Authenticity Meter and considers many of them helpful in building momentum toward legislation. The problem is, they’re still just words. The Business Roundtable’s call to action, for instance, is “just a statement — a promise to lead. Time will tell if the [Business Roundtable] and its members follow through with the advocacy required to move climate policy forward.”

When it comes to actual lobbying, the heavy hitters aren’t individual corporations, but the trade associations representing them, like the U.S. Chamber of Commerce and the American Beverage Association. It’s one thing if a single company asks a politician to vote for a bill, and quite another when the request comes from an entire industry. “With the Chamber of Commerce, for instance, there’s always the implicit threat that if you don’t go along with us, we’ll go against you in the next election,” said Tom Lyon, a professor who studies corporate environmental strategy at the University of Minnesota.

Perhaps the trade group representing the highest concentration of companies making big carbon-cutting commitments is TechNet, which did not respond to requests for comment. TechNet lobbies for pretty much all tech giants, from Alphabet, Apple, and Amazon, all the way to Zoom. Early last year, it put out a 13-page, bullet-point studded document, explaining the policy objectives these companies hoped Congress could achieve. Some of these priorities extend well beyond immediate self-interest: The corporations asked the government to overhaul immigration policy and address systemic inequality. But when it came to climate change, there was nothing.

“The silence is deafening,” Whitehouse said.

So why aren’t these companies doing more? A pair of University of Glasgow academics, political science professor Kelly Kollman and business school lecturer Alvise Favotto, tried to figure out if corporations were connecting the dots between the do-gooder policies they were adopting within their company and the policies they were lobbying for in government. They wanted to know if the people working to make the companies more environmentally friendly, for instance, were coordinating their efforts with their lobbyists. Their findings, published in 2019, suggest that they were not — in the 150 corporations they surveyed in the United States, United Kingdom, and Germany.

“Looking at these organizations from the outside, you’d think that if they are going to be making these commitments about diversity and climate change, they would go to their lobbyists and say, ‘Are we OK on these things? Are these things aligned?’” Kollman said.

For many business people, lobbying was an afterthought — something they tried to stay out of. People who are passionate about business are more likely to believe that business, not government, are the best tools for changing the world. Kollman remembers one sustainability officer explaining his approach to government action as hands-off: “This person said, ‘We see our role as trying to change markets, and trying to change business models, we don’t see our role as trying to change policy,’” Kollman said. “It’s just not in the mindset of how they make the world a better place. And I think that was a genuine answer.”

Their survey showed, however, that these views have been shifting. “Our data showed that close to no one saw lobbying as something that should be part of their corporate social responsibility reports until around 2006,” Favotto said. By 2013, 46 percent of the U.S. companies they were studying had begun at least acknowledging their lobbying in their corporate social responsibility reports.

More academics are beginning to study the relationship between corporate statements and corporate lobbying. Lyon directs the Erb Institute for Global Sustainable Enterprise at the University of Minnesota, which is setting up a task force to investigate the transparency of business lobbying efforts. Several organizations — Influence Map, Preventable Surprises, and The Center for Political Accountability — have begun tracking the issue, and there’s talk that the U.S. Securities and Exchange Commission could mandate better corporate sustainability disclosure, he said.

“There are all these nascent efforts,” Lyon said. “People are realizing that this is a big issue.”

With a new Congress and a new president, it appears the ground is shifting. TechNet is now calling for federal climate action to “limit warming to at least 1.5 degrees Celsius by the year 2050,” though it’s not clear if the group will make this issue a lobbying priority.

More and more corporate leaders are taking an interest in the lobbying their companies are paying for, said Victoria Mills, head of EDF’s corporate climate policy program. “I do think we are starting to see much more active engagement by companies on climate policy,” she said.

Still, Mills said she agreed with Whitehouse about the general state of affairs.

“He’s not wrong. You have some leaders out there, but by and large, the vast majority of companies are silent.”