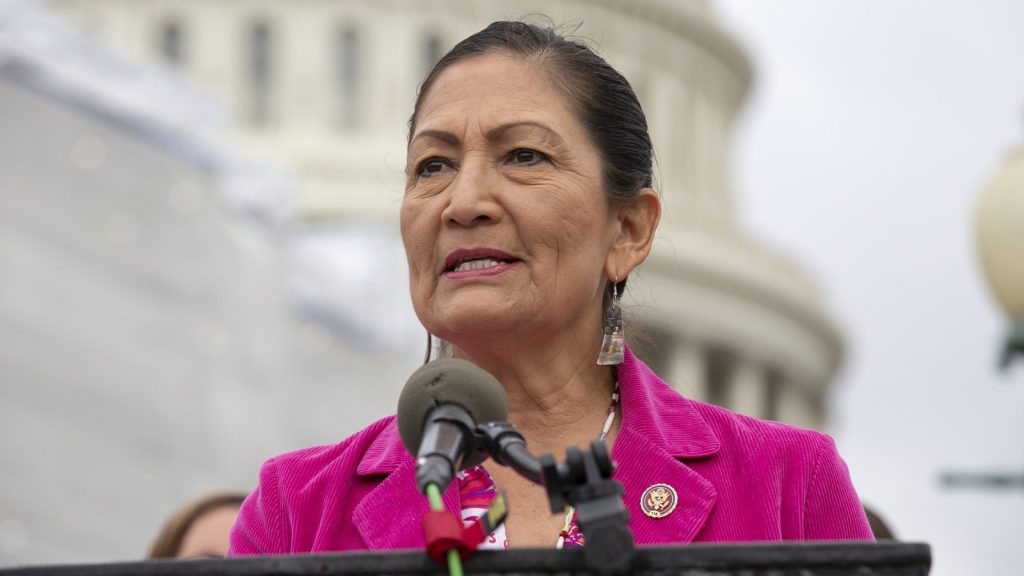 During his presidential campaign, Joe Biden said he would ensure that Native American tribes have “a seat at the table at the highest levels of the federal government.” Progressive activists, environmental advocates, and Indigenous groups are lobbying the now-president-elect to make good on that promise by nominating Debra Haaland, U.S. representative from New Mexico and an enrolled member of the Pueblo Laguna tribe, to lead the Department of the Interior. And according to reporting Tuesday from Reuters, Haaland is emerging as the former vice president’s top choice for the Cabinet position. (Update, December 17: Biden has selected Haaland as his nominee for interior secretary, according to multiple news reports).

The Secretary of the Interior is charged with stewarding some 500 million acres of public lands, as well as assuming responsibility for the country’s national parks, endangered species habitat, and oil and gas drilling sites. The department, which houses the Bureau of Indian Affairs and the Bureau of Indian Education, oversees the interests of the nation’s nearly 2 million Indigenous people belonging to 547 federally recognized tribes.

The agency, however, has a long and sordid history of abdicating its responsibility to tribes, evicting Natives from their ancestral lands, abusing Indigenous citizens, and breaking treaties. And the Interior Department under President Trump has drawn fire for its antagonistic treatment of tribes. In April, for example, Trump directed the department to revoke the reservation status of the Mashpee Wampanoag tribe in Massachusetts.

If she is chosen to lead the Interior, Haaland, who made history in 2018 when she became one of the first two Native American women elected to Congress, would become the first-ever Indigenous Cabinet secretary. Tribes across the nation have thrown their support behind the nomination, but a major obstacle stands in Haaland’s way.

A source familiar with the selection process told the Huffington Post on Tuesday that “there is mounting pressure and increasingly vocal concern not to pull anyone else from the House.” That’s because a dozen Democrats lost their House seats in November’s election, and House Majority Leader Nancy Pelosi will be working with only a slim majority in the next Congress. Already, Biden has tapped two Democratic representatives — Marcia Fudge of Ohio and Cedric Richmond of Louisiana — to work in his administration, and Pelosi may not want to part with another. If Haaland is nominated to serve at the Interior, Pelosi would have a precarious 219-213 majority until those empty spots are filled in special elections.

Still, Haaland’s district in northern-central New Mexico went for Biden by 23 percentage points this election. It’s unlikely her deep blue seat would be lost if her district had to hold a special election.

Instead of further jeopardizing the one chamber of Congress Democrats are assured to have control over, Biden might decide to go with a different Native American nominee: Michael L. Connor, a partner at the law firm WilmerHale — where former FBI director and Special Counsel Robert Mueller is also a partner — and a deputy Secretary of the Interior under President Obama. Connor, a descendant of the Taos Pueblo tribe, specializes in environmental and Native American law. The New York Times reported that Connor’s experience working in government, in addition to the fact that his nomination would have no impact on Pelosi’s majority in the house, makes him an attractive alternative to Haaland.

Opting for Connor is unlikely to sit well with Native groups. Dallas Goldtooth, a member of the Mdewakanton Dakota and Dińe communities and an organizer for the Indigenous Environmental Network, says he’s never seen such widespread support among tribes for a candidate for a federal agency position. “You have hundreds and hundreds of tribal nations who have expressed support for Haaland,” he said. “Even the Taos Pueblo nation that Michael Connor belongs to, is backing and supporting her.”

Further, no one really knows Connor, Goldtooth explained. “Insider folks who have worked on Capitol Hill may know of him, but Indian Country doesn’t know him.”

Goldtooth says tribes are under no illusion that an Indigenous Interior secretary, like Haaland, will immediately smooth over the Interior’s dark history of disenfranchising Native populations. But he said her appointment would be a “solid step in the right direction.”

In a statement on Wednesday, Pelosi pushed back on the idea that she was holding back Haaland’s nomination. “If she is the president-elect’s choice for Interior secretary, then he will have made an excellent choice,” she said.