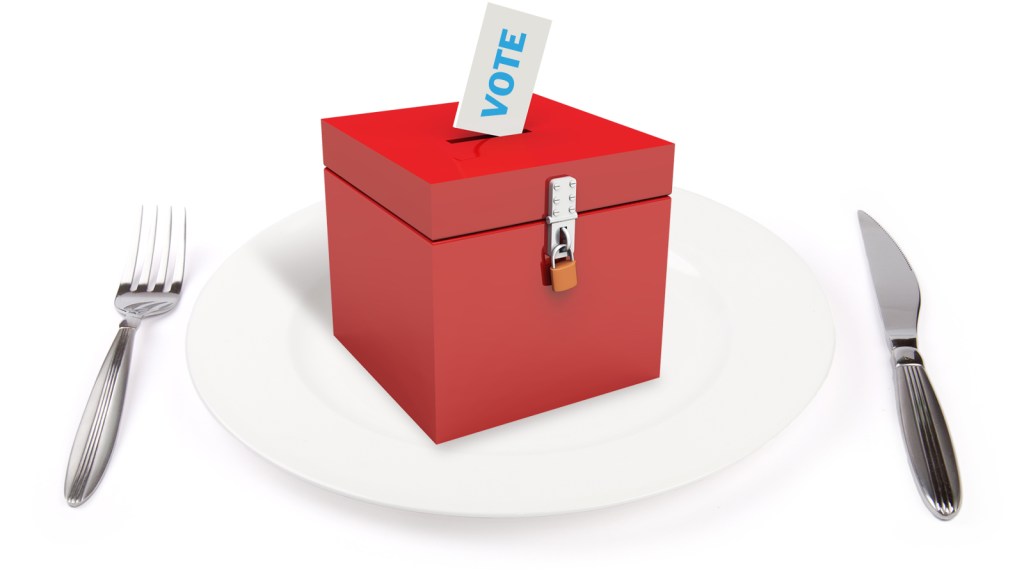 Despite all the media chatter over which party controls the Senate, as Jonathan Chait has pointed out, the Republican victory will probably just lead to more gridlock. That is, the do-nothing government will do nothing more intensely.

But if you are interested in food and farming, some of the midterm election results do matter. There were several key legislative seats hanging in the balance, and interesting ballot measures on GMOs and soda taxes. Here’s a rundown.

I’ll have a more detailed analysis of why these votes went the way they did, and what it might mean, soon. For now, here’s what happened:

Colorado — Voters handily rejected an initiative to label genetically engineered foods. The pro-labeling groups decided that Oregon was a better bet than Colorado, and spent most of their money on that campaign. Supporters of labeling spent around $900,000 in Colorado, while those against raised some $17 million.

Oregon — The vote to label genetically engineered foods was much closer in Oregon, where the spending was a little more evenly matched. Those seeking to label foods raised $7 million, versus $20 million on the other side. But the initiative still failed, by a slim margin.

Maui and Molokai, Hawaii — Voters narrowly approved an initiative prohibiting the use of all genetically engineered seeds until another public health assessment is completed. This moratorium will have profound effects on the islands’ farms, particularly on Molokai, and will almost certainly face a legal challenge. Biotech companies like to grow seed in Hawaii because it has a tropical climate, which allows for multiple plantings each year, and it’s part of the U.S., which cuts down on the red tape. I wrote about the importance of the islands to the industry here.

Humboldt, Calif. –– A GE farming ban looked like it would pass in Humboldt County, which, compared to Molokai, is no big deal. There are already several bans like this in coastal Northern California, but there aren’t many GE seeds suited for the farms there. The food and farming companies that spent big to defeat other labeling measures ignored this one.

In Berkeley, Calif. (where I live), and across the bay in San Francisco, voters decided whether to tax sugar-sweetened beverages: Berkeley will have a soda tax, but not San Francisco. The San Francisco measure needed a two-thirds majority vote, because California requires a higher hurdle for taxes that are earmarked for a specific purpose. In Berkeley, the tax just needed a simple majority, because the revenue will go straight to the general fund.

I wrote about these soda taxes here. Diet-related disease is such a huge, immiserating problem that I think it’s worth trying some policy experiments like this.

Since I wrote that, however, I’ve begun to wonder if the tax will really drive down soft-drink consumption. In Berkeley, it’s a tax on beverage distributors, not consumers, and the distributors may not pass the costs on directly — they could hike up prices across the board, or take the tax out of their profits. I asked Berkeley City Councilmember Linda Maio about this at a neighborhood campaign meeting, and she explained that she, and the other architects of the initiative, made a political decision to tax distributors rather than consumers. They conducted a poll and found that the closer the city got to taxing the industry — as opposed to the drinkers — the more likely people were to support it.

So this tax may not make soft drinks more expensive, and if it doesn’t, economic forces will do nothing to cut consumption. However, the money from the tax is supposed to go to school-lunch and nutrition-education programs. That education could cut down on soda drinking and obesity across the board. I hope there’s some graduate student at U.C. Berkeley poised to study the effects of the tax. Who will pay it, ultimately? And what impact will it have?

The purest sort of sin-food tax would simply be to make sugar more expensive across the board — that is, move the tax all the way up, past food distributors and manufacturers, to raw commodity sugar. That would give industry the incentive to lower the amount of sugar it adds to foods.

Legislative races that matter for food and farming

In the Florida panhandle, Rep. Steve Southerland — the Tea Party conservative who garnered some national attention for proposing a massive cut to food stamps and blocking the passage of the farm bill — lost to Democrat Gwen Graham. Food Policy Action made Southerland its main campaign target, and Roll Call put him on its list of the 10 most vulnerable incumbents after he held a men-only cigars-and-whiskey event (you should really read the invitation; it’s hilarious now that he’s no longer going to be serving in Congress).

While we are talking about the farm bill, Republican Tom Cotton unseated Democratic Sen. Mark Pryor in Arkansas. Cotton will move over from the House, where he voted against the farm bill, saying it provided too much money to feed the poor. It’s hard to imagine this new Senate passing a farm bill that President Obama would sign.

In Rochester, N.Y., Democratic Rep. Louise Slaughter, a champion for reform in the use of antibiotics for food animals, was just barely clinging to a knife-edge victory. Prognosticators had expected that she would easily win, and she raised nearly three times as much money as her challenger, Republican Mark Assini, but the count was down to less than 600 votes, and might be determined by absentee ballots.