Christine Todd Whitman is arguably the most prominent figure ever to lead the Environmental Protection Agency under a Republican president, and she has critical words for Donald Trump’s potentially disastrous pick Scott Pruitt.

“I don’t recall ever having seen an appointment of someone who is so disdainful of the agency and the science behind what the agency does,” Whitman told Grist. The former governor of New Jersey led the EPA under George W. Bush from 2001 to 2003.

“It doesn’t put us in a good place, in my mind,” Whitman said. “And he’s going to have trouble within the agency if he does convey that kind of disdain to the career staff.”

Pruitt has close ties to the oil and gas industry. As Oklahoma attorney general, he sued the agency at least 13 times in five years, eight cases pending. The most high-profile case is his ongoing lawsuit against the Clean Power Plan, Obama’s most ambitious climate-related regulation. His career has gotten a boost from the likes of oil executive Harold Hamm, who was co-chair of Pruitt’s reelection campaign.

At times, Pruitt directly coordinated with the Oklahoma oil and gas industry to put pressure on the Obama White House in an effort to weaken clean air and water regulations or squash investigations. 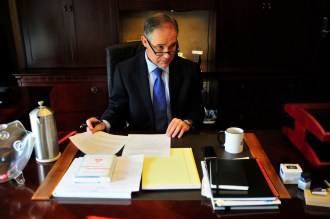 “He obviously doesn’t care much for the agency or any of the regulations it has promulgated,” Whitman said. “He doesn’t believe in climate change; he wants to roll back the Clean Power Plan.”

Whitman foresees Pruitt clashing with the staff of the agency she once ran, which could have several consequences, she said. Staffers could stand in the way of Pruitt’s ambitions to cut back on the agency’s role, slowing the potential damage of his appointment. But at the same time, Pruitt could slow the staff’s ongoing and vital work. Remember Flint, Michigan? Superfund cleanups? Clean air?

Or, if the clashes are too severe and agency staffers either walk away or get purged under Pruitt, the EPA would lose a vast amount of expertise in a short period of time. “I worry about people retiring and losing institutional knowledge,” Whitman said. “They can slow things down, but he could too, and put a hard stop to regulations.”

In addition to suing over Clean Power Plan regulations, Pruitt has argued that climate activists should be prosecuted, and that debate over whether climate change is human-made should be encouraged in classrooms and Congress — despite overwhelming scientific evidence that the debate is settled.

Compared to where her party stands today on climate change, Whitman is considered an outlier. She has argued that the GOP should moderate itself on climate change and accept that humans play a role. Her philosophy — “Not being a scientist, I rely on the ones that are” — is quite rare these days. As extreme as Pruitt is, he’s in line with Republicans like House Science Chair Lamar Smith and Senate Environment and Public Works Chair James Inhofe — climate-denying senators who use their positions to confuse the public and block progress on climate action.

Still, Whitman pointed out the possibility for pushback to Pruitt’s anti-conservation agenda from hunters and ranchers within the GOP’s base, and possibly the more moderate Republicans she has had conversations with in Congress (Whitman declined to name those politicians).

For those still fooling themselves into thinking that Trump means it when he tells interviewers he has an “open mind” on climate science and environmental protection, his appointments should be telling.

“I never thought Trump was particularly an ideologue, but the picks have been a very conservative mindset,” Whitman said. “That will tell you he is quite serious about the anti-government pronouncements he made.”

Are those magic sponges terrible for the environment?