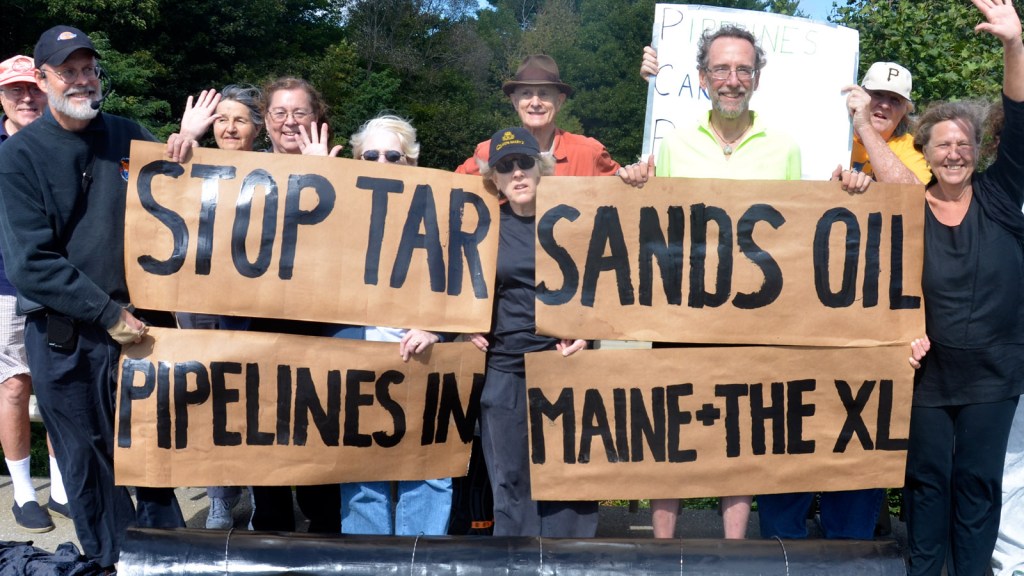 Citizens trying to stop the piping of tar-sands oil through their community wore blue “Clear Skies” shirts at a city council meeting in South Portland, Maine, this week. But they might as well have been wearing boxing gloves. The small city struck a mighty blow against Canadian tar-sands extraction.

“It’s been a long fight,” said resident Andy Jones after a 6-1 city council vote on Monday to approve the Clear Skies Ordinance, which will block the loading of heavy tar-sands bitumen onto tankers at the city’s port.

The measure is intended to stop ExxonMobil and partner companies from bringing Albertan tar-sands oil east through an aging pipeline network to the city’s waterfront. Currently, the pipeline transports conventional oil west from Portland to Canada; the companies want to reverse its flow.

After an intensely debated, year-and-a-half battle, the South Portland City Council on Monday sided with residents like Jones who don’t want their city to end up as a new “international hub” for the export of tar-sands oil.

“The message to the tar sands industry is: ‘Don’t be counting your chickens yet,’” said Dylan Voorhees, clean energy director for the Natural Resources Council of Maine. “There is a pattern of communities saying ‘no’ to the threat of tar-sands oil.”

The ordinance could have global implications. The Canadian government expects the nation’s oil industry to be producing 4 million to 6 million barrels of tar-sands bitumen a day within a few years, and it’s pinning its hopes on somehow getting all that oil to coastal ports, said Richard Kuprewicz, president of Washington-based pipeline safety consulting firm Accufacts Inc. Indeed, a recent report from the International Energy Agency found that the industry needs export pipelines in order for its boom to continue.

South Portland’s move is just the latest setback for plans to pipe the bitumen out to international markets. Another big hurdle is the long delay over the Keystone XL pipeline. And in Canada, pipeline plans have met with opposition from indigenous peoples (known as First Nations), who are taking the lead to stop projects like the Enbridge Northern Gateway tar-sands pipeline through British Columbia.

Now, there is a clear signal that communities along the U.S. East Coast will fight tar-sands expansion too.

“Do not under estimate the power of a local government,” said Kuprewicz.

“A lot of perseverance”

In early 2013, residents formed Protect South Portland to try to stop the Portland-Montreal Pipeline reversal. They put an initiative on the November 2013 ballot to block the project, but it lost narrowly at the polls.

So the city council took up the cause. In December of last year, the council voted to impose a six-month moratorium on shipping tar-sands oil out through its port. Then a council-appointed committee crafted the Clear Skies Ordinance to permanently block tar-sands shipments, which is what the council officially approved this week. The law also changes zoning rules to block the construction of twin smokestacks that would be needed to burn off bitumen-thinning chemicals before the oil could be shipped out.

Over the past few months, concerned residents met in homes and Protect South Portland grew. Meanwhile, the group Energy Citizens, backed by the American Petroleum Institute, the oil industry’s largest trade group, ran ads that said “It’s just oil. From Canada.” The oil companies hired a number of lawyers and brought public relations firms on board.

Protect South Portland spokeswoman MJ Ferrier estimates that the grassroots group was outspent by at least 6 to 1.

So how did residents win over Big Oil? “A lot of perseverance and a lot of community engagement,” Voorhees said.

After the vote, supporters of the ordinance went to a local bar, and “we raised our glasses,” Jones told Grist.

But while local activists are celebrating this week’s win, they know “this is not the end,” said Jones.

South Portland Councilor Tom Blake, who’s been a champion of the effort to protect the city from tar sands, said a legal challenge seems imminent, by either Portland Pipe Line Corp., a subsidiary of ExxonMobil, or by the Canadian government. Blake had this message for the oil company and Canadian officials Monday evening: “This ordinance is the will of the people,” he said. “Do not spend millions of dollars and force the city of South Portland to do the same.”

But the oil interests are unlikely to heed his warning.

Tom Hardison, vice president of Portland Pipe Line, told reporters that the city had made a rush decision and bowed to environmental “off-oil extremists.” He added that the zoning changes amounted to a “job-killing ordinance” that prevents the city’s port from adapting to meet the energy needs of North America.

Matthew Manahan, attorney for Portland Pipe Line, told the city council before the vote that its ordinance is “illegal” and “would clearly be preempted by federal and state law.”

“The council is ignoring the law” and “ignoring science,” the lawyer added.

Like the process of extracting tar-sands oil, the process of transporting it takes a huge toll on the environment. Before the heavy, almost-solid bitumen can be sent through pipelines, it has to be thinned with a concoction of liquid natural gas and other hydrocarbons. And then before it can be loaded onto ships, that concoction has to be burned off. ExxonMobil currently holds permits to build two smokestacks on South Portland’s waterfront that would do the burning.

Ferrier, a retired psychologist and a nun, joined Protect South Portland largely out of concern for what the oil companies’ plans would do to air quality in an area that has already received a “C” for ozone pollution from the American Lung Association. The proposed smokestacks would emit volatile organic compounds (VOCs). “We know there is benzene in it, a known carcinogen,” said Ferrier.

Resident Andrew Parker had similar concerns. “Tonight is about children,” he said at Monday’s city council meeting. “The oil company will put poison in the air, that is a fact.”

For Mayor Gerard Jalbert, who also sits on the city council and voted in support of the ordinance, it came down to concerns about water quality. The risk of water contamination in the case of a spill far outweighed the nebulous claims about job creation.

“When I look at the economic benefit, which no seems to be able to detail, the risk seems to outweigh the benefit,” Jalbert told Grist.

The easternmost 236-mile stretch of pipeline crosses some of the most sensitive ecosystems in Maine, including the Androscoggin River, the pristine Crooked River, and Sebago Lake, which supplies drinking water for 15 percent of the state’s population.

Blake, the council member, is worried that using old pipes to transport heavy bitumen could lead to a spill like the one that happened in Mayflower, Ark., in March 2013, when an ExxonMobil pipeline built in the 1940s ruptured and spilled hundreds of thousands of gallons of tar-sands oil.

Saying “no” to tar sands is part of a bigger shift to a greener future in South Portland, Blake added. “Being a community that has been heavily dependent on petroleum, this turns a tide,” the councilor said.

He pointed to a new electric-car charging station at the city’s community center and potential plans to build a solar farm on an old landfill as steps toward a sustainable future. “I think we are starting to walk the talk,” Blake said.