I fought the law and, actually, I won: How one lawyer helps protesters 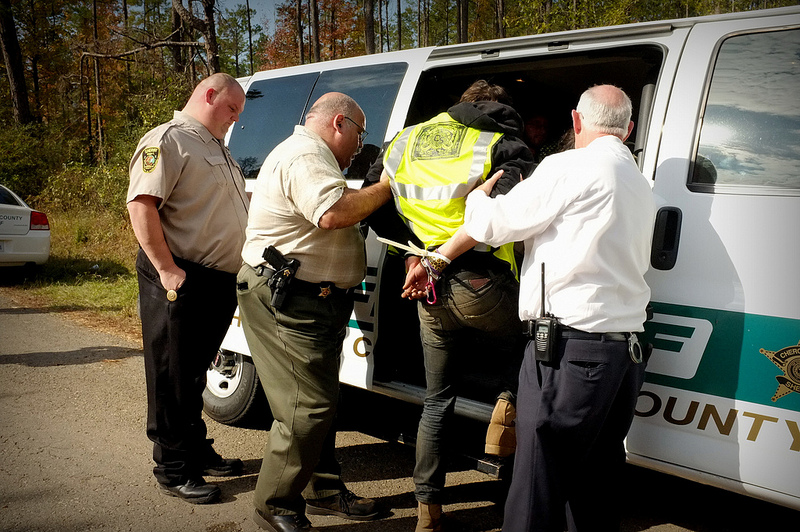 I fought the law and, actually, I won: How one lawyer helps protesters

Lauren Regan became a lawyer for idealistic reasons: There were trees; she wanted to save them.

Then, in October 2001, the Patriot Act was signed into existence, and the landscape of environmental protest changed. Police, now equipped with military surplus gear and Homeland Security funding, began to treat protesters differently. So did the legal system.

In 2003, Regan founded the Civil Liberties Defense Center specifically to help environmental activists navigate this new legal landscape. Regan spoke with me recently about how location and legal precedent mean a lot when you’re interested in saving a landscape.

Q. What made you decide to become an environmental lawyer?

A. I saw a potential way to be even more effective as an activist. Before that, I was involved in forest activism.

Q. So you were a tree-sitter?

A. I certainly learned to climb trees. But I was not big on going to jail. For the most part, in activist land, there is an understood line of what is legal and illegal. If you don’t want to put yourself into a position to be arrested, there’s always a lawful space for you at a protest. You can be the media contact, or a legal observer.

Q. What changed during the transition from activist to lawyer? Did it make you see activism any differently?

A. Protests and tree sits can save a little forest with a lot of effort, but getting an injunction in a timber sale case can shut down the entire national forest for a while. I also litigate timber sales and Endangered Species Act cases and Clean Water Act cases.

But then once I was doing that kind of law, I realized that oftentimes activists were getting really shoddy criminal representation. Especially as the punishments have gotten more severe and the stakes have gotten higher, it’s more important that there are lawyers who specialize in defending dissent in all its different forms.

When the Tar Sands Resistance began, when the police showed up at actions, we found out that the sheriff’s deputies had never seen a protest before. They used tactics that are clearly illegal and have been litigated in the federal court system as excessive force — these cops were going at it.  Police were using tasers on people who were locked down to metal pipes.

I would literally have to go up to the section commander and say, “Hey, we’re going to have to sue you under section 1983 of the federal code. You’re not allowed to do this.” And I would have to sit there and educate them about what the law was. Most of these cop shops had never had a federal civil rights lawsuit for police misconduct filed against them.

Q. So you’ve noticed regional differences in the way activism is policed?

A. In the Northwest, when there is a blockade that takes place on a logging road, the police are more trained about those scenarios and generally tend to be more professional. This is because of decades of forest activism. It’s especially because of a number of lawsuits we’ve filed against them.

Q. Do you feel like there’s been a decline in tree-related activism because of Keystone?

A. There is still a lot of forest action in Oregon, but forest activism has always been regional. In trying to build broader movements there has been a concerted effort to join to push sustained policies towards the greatest threats, which are tar sands and coal. And the companies that are pushing those are the largest and the richest, which make them an even bigger challenge.

In Texas, with the Tar Sands Resistance, we’ve seen unprecedented cooperation between corporations and local law enforcement. TransCanada normally has a corporate representative at any protest. In one of these instances, several of the deputies were running around randomly spraying mace in the faces of group of local people who were standing across the street and holding signs, including a 75-year-old grandmother who actually was the local schoolteacher who had taught some of the other cops.

After the protests died down, we watched the TransCanada representative walk over to the sheriff’s deputy, slap him on the back, and say, “Great job today. We’ll make sure to replace that pepper spray for you.”

Q. It’s surprising to me that a police department could accept a gift like that.

A. Normally, police departments are funded through city budgets. They don’t normally solicit direct influxes of money. They are allowed to charge for work as security guards. I don’t know if anyone has requested the public records of any of the Texas counties yet to determine whether this is true, but I’m guessing that the TransCanada rep just showed up at the station with a few cases of pepper spray, and everyone did a little wink-wink and a nod-nod, and they were inventoried and distributed to the department. Because normally there are pretty strict budget and financial protocols that are supposed to be followed. But again, when you’re in those counties, those normal rules and practices are more likely to be ignored.

In the tar-sands cases, we’ve seen judges hold people in jail for up to 60 days prior to even being arraigned. Not granting them bail. Not releasing them on their own recognizance. And normally I would say that, in 90-95 percent of the cases that I deal with around the country, nonviolent civil disobedience protestors are released on their own recognizance, which means that they don’t even have to pay bail to get out of jail.

A. Definitely. One, if they get a ruling against them that says, “You broke the rule, cop,” normally there is some kind of court monitor that oversees that department to make sure they come into compliance and some kind of mandatory training of all of their officers. They have to change their policies and training to comply with the law. And they have to pay out money to the activists. And the individual cops and the cop unions really abhor this.

Every time we’ve done a lawsuit and we’ve prevailed, we’ve sent a letter to every police department in the state saying, “Hey. Just so you know — we just sued your buddies and won. We request right now that you change your policies too.” That is important because there is a clause in civil rights legislation called qualified immunity — cops can use it as a defense if they don’t know the law.

So anytime new legislation comes out about tasers or use of force or any of those things, we try to circulate it far and wide so that they are on notice that if they engage in that activity they will get sued, and they will not have qualified immunity as a defense to fall back on.

Q. How did you learn about how to handle this? This doesn’t seem like what they would teach you at law school.

A. Yeah. Environmental law programs are going to teach you a lot about timber sales and endangered species. They aren’t going to teach you about this. I’ve been doing it now for 16 years and it’s definitely trial by fire. You do as much research as you can. But when it comes down to interacting with very adrenalized cops at an actual protest — it’s really just experience.

Q. So you’ve been there to witness the transformation of cops from being somewhat regular-looking humans into these androids in riot squad gear?

A. Yep. The militarization of the police. Unfortunately, in my lifetime, that transformation has fully transpired.

Q. Have you ever run into any old-timers who talk about the way things used to be? Were they easier or just different?

A. I would say that the one difference when I was talking to some of my mentors is that, in the ’60s and ’70s and even into the ’80s, if the police really wanted to injure activists, they really had to break a sweat to do it. Now we have beanbags coming out of semi-automatic weapons and tasers and pepper spray.

A lot of the technology that we’re seeing at protests now really is a significant violation of human rights. But it’s obvious why the police like those toys, because they are extremely effective at causing pain, and you don’t have to break a nail in the process.

Q. Do you feel like that has changed the way that protests are carried out? Have activists adapted to more violent policing?

A. I think probably the increase in underground activists like the ELF [Earth Liberation Front] and the ALF [Animal Liberation Front] is probably a result of police brutality. Activists for a long time were chaining themselves to this and that and basically allowing themselves to become human punching bags. And I think there was a large segment of the activist community that said, “Despite decades of nonviolence, the police continue to perpetuate violence on us. So now, we’re just not going to get caught.”

The other tool I see a lot of activists using is documentation: use of video cameras and livestreaming. I use it all the time in these lawsuits. I can also tell you I have a number of lawsuits where activists were roughed up for videotaping. And we won a bunch of those suits by saying that a public servant doing a public duty in a public space has no right to privacy.

It has made such a huge difference in the way police operate. They used to be able to rough people up with impunity. And now they never know who might be filming. So that is changing things slightly for the better.