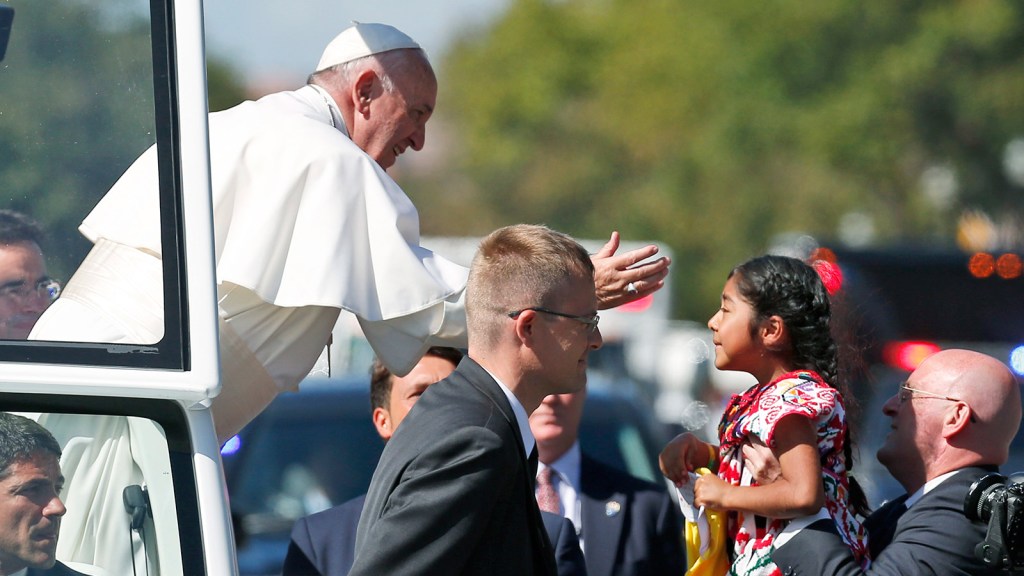 In his remarks outside the White House Wednesday morning, Pope Francis opened with a very explicit and personal remark about immigration: “I am deeply grateful for your welcome in the name of all Americans. As the son of an immigrant family, I am happy to be a guest in this country, which was largely built by such families.”

The pope is expected to address immigration head-on this week — along with climate and poverty — as he visits D.C., New York, and Philadelphia.

On Wednesday, Francis broke security protocol after a 5-year-old named Sophia Cruz made her way through a barricade in an attempt to get close to him. The pope beckoned her after reportedly making eye contact with her; he blessed her before she gave him a letter and a T-shirt:

According to The Guardian, the letter referenced her parents –both undocumented immigrants from Oaxaca, Mexico (she is a U.S.-born citizen) — and her fear that they may be deported.

Among the throngs gathered in Washington to greet the pontiff were 100 women who had marched 100 miles to be there — to make a point about the way U.S. immigration policy is tearing families apart. Organized by the National Domestic Workers Alliance and We Belong Together, the march’s participants began their seven-day pilgrimage at an immigrant detention center in York, Pa., and ended at the Basilica of the National Shrine of the Immaculate Conception in Washington.

One of them was Marie Hernandez, the program coordinator for the Pilipino Workers Center in Los Angeles. Hernandez, an immigrant from the Philippines (“We’re Catholic, and the pope is a big deal in our country!” she exclaims), joined the marchers for the last three days of their journey. We caught up by phone shortly after she arrived at the basilica.

On why she joined:

I’m from Los Angeles, and the issue of immigration is no joke there. There have been too many deportations splitting up families — not just Latino families, but Pilipino families and people from all over the world, and I share and walk the streets with them. Immigration is a multiracial issue and we need to stop turning our back. I work with families every day and I’ve seen what immigration policy does to them. So four of us [from the Pilipino Worker’s Center] got together and decided to join this march.

I’m here to make sure that the voices of women, of migrant workers whose families have been split up or have suffered, can be heard — not necessarily by the White House, but hopefully by the pope. I hope he can see that women have walked 100 miles, which started at a Pennsylvania detention center, and that he’ll talk about immigration when he addresses Congress.

On how her own family has been affected:

My own brother was deported in 2004 — he technically committed fraud when he arrived to the U.S. for falsifying papers to enter the country. But he was here for 10 years prior to that, and our whole family is still here; we’re six brothers and sisters, and my mom worries about him being apart from all of us. She knows that if anything happens to her, he won’t even be able to visit her here. But I did three days of walking, 10 miles every day, with women from all over the country, and was surprised and humbled to hear their stories. After hearing them, I was reminded that I shouldn’t ever complain.

On how climate change is already creating refugees:

After Typhoon Haiyan, [the Philippines] filed for Temporary Protected Status — and we never got it. We don’t even know why. [Compare this to] Nepal, which also applied after its earthquake and was approved after five or seven days. To this day, I’m amazed that our TPS was never approved. Here we are, two years later and still nothing. It’s so discouraging to see that time has passed and our application is still pending.

On her hopes for what Pope Francis will tell Congress on Thursday:

I’m hoping he’ll address immigration. I’d really like to hear him say that Congress needs to deal with families with compassion. And that immigrants are human beings who shouldn’t just be thrown away — which is what happens when people are detained and deported. Detention and deportation are not answers. All that does is separate families who live here and have been here a long time.