Inslee on Seattle tunnel: "No one is more frustrated by this project than I am" 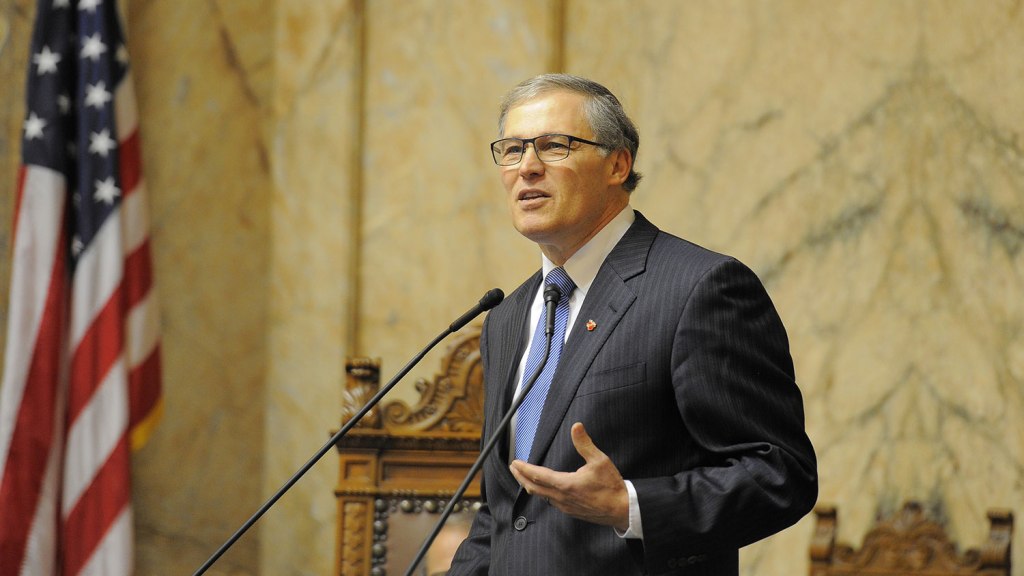 Inslee on Seattle tunnel: “No one is more frustrated by this project than I am”

On Wednesday, I went down to Olympia to chat with Washington Gov. Jay Inslee (D) about his ambitious recent policy proposals, which include a carbon cap-and-trade system and a 10-year, $12 billion transportation plan that it would help fund.

We’ll get to that stuff later, but I wanted to start with my current obsession, the giant fustercluck currently unfolding in Seattle. (Capsule version: We’re building a huge new tunnel beneath downtown, solely for cars; the tunnel-boring machine broke just one-tenth of the way in and remains sitting there, stuck; efforts to repair it have been … fraught. Delays and cost overruns stretch as far as the eye can see.)

When I asked him about the tunnel project, Inslee expressed immense frustration. He implied that the tunnel might not have been his first choice, but he insists that there’s no other viable option now but to move ahead. He was insistent, however, that the contractor, not taxpayers, be on the hook for current repairs. Here’s the relevant exchange.

Q. Seattle is in the midst of a slow-motion fiasco. Do you have any take on the situation or any plans to intervene?

So I think [the state’s] role is to be as appropriately protective of the public vis a vis the contractor as possible. And we are. It’s the contractor’s responsibility to give us a tunnel. It is their project and we’re going to be insistent that they owe us a tunnel. We’re the customer. We’re like the guy who’s having his house remodeled and the contractor hasn’t done any work in the past year because his buzz saw isn’t working. We’re not happy about that.

Q. This contractor has been known to be legally aggressive.

A. Right, and I’ve been known not to be a pushover in the courtroom myself after 20 years of litigating.

We’re happy to have a discussion with the contractor when this project is completed about those issues. They’ve made about $185 million worth of demands already; we’ve denied, I don’t know, 90 percent of them. [*]

I don’t think the public understands this; they still think that this is a state [Department of Transportation] project. This is a project where almost all the risk is on the contractor. It was a conscious decision by the legislature to have almost a private approach to this. And the Republicans were all over this, I’m told, before I was here. They wanted to put both the benefit and the risk on the contractor; they wanted to have the efficiencies of the private sector. We’re seeing the efficiencies of the private sector right now.

As far as completion dates, we’re very frustrated that this will not be done as early as we would have liked, but the contract has a provision that we will be paid up to $100,000 a day for late performance from the contractor. [**]

In light of the difficulty the contractor has run into, some people say we should abandon this and go to some other option. But there is no other option that’s viable. There’s no other option other than having that viaduct sit there in an unsatisfactory position for another decade, decade and a half.

Q. You’re not convinced by the surface/transit option? Tearing [the viaduct] down and improving transit and surrounding streets?

A. Then you’ve got a billion and a half dollars that we’ve spent on something that didn’t give us any asset at all, and potential claims from the contractor. I don’t think that’s a viable option or solution to this problem.

We have looked at these issues. We’ve looked at the financial ramifications of not moving forward. We’ve considered other options on the north and south work that’s going on. There’s really no fiscally prudent course other than the course we’re on.

The situation is, the contractor has a machine that doesn’t cut it, and they’re going to have to do a very massive rebuilding on this machine to make it work. And we’re hoping that they’re successful. The good news is that these are pretty solvent companies. There’s at least a $500 million performance bond; their survival depends, in some sense, on the completion of this project. They are highly motivated to succeed here. This is not something they’re walking out the door on.

Q. Maybe [Seattle Mayor] Ed Murray? I wonder what he thinks in the dark hours of the night.

A. I do think it’s important to realize that the moonshot had its problems too. Apollo 13. The launch pad fire. This is kind of a moonshot of a tunnel project; it’s the biggest one in history. That happens sometimes on moonshots.

Q. It would be nice if we had a moonshot that wasn’t devoted to moving cars around.

A. [Raises hands.] Decision made before I got here.

I asked the governor’s office about this and they sent some clarification. The contractor, Seattle Tunnel Partners (STP), has to date requested $192 million in change orders. The state has rejected 80 percent of them. For example, when Bertha hit the abandoned well casing (which is probably what broke her, though that’s not been confirmed), STP requested $125 million. The state rejected it, since information about the casing was contained in the original request for proposals.

This point is covered in more detail on the WSDOT website. For each day STP completes the project before the contractually agreed-upon completion date (Nov. 1, 2016), it’s eligible to receive $100,000 a day, up to $25 million. For each day after the agreed-upon date that STP completes the project, it is liable for up to $100,000 a day in “liquidated damages,” up to a maximum of $75 million.