It was climate action vs. military spending at the 8th Democratic debate 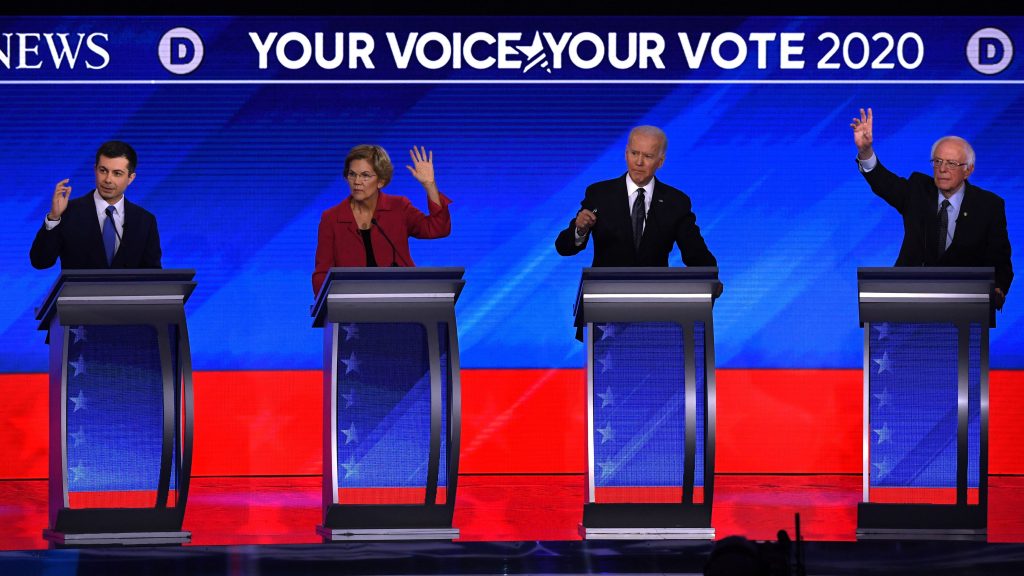 It was climate action vs. military spending at the 8th Democratic debate

Seven Democratic candidates for the presidency emerged from the dumpster fire that was the Iowa caucuses and assembled in New Hampshire, where voters will cast their ballots in just four days, to try to address several burning issues.

Bernie Sanders and Pete Buttigieg, who are stuck in a virtual tie after the delayed and muddled Iowa results, were joined on the debate stage by Elizabeth Warren, Joe Biden, Amy Klobuchar, Andrew Yang, and Tom Steyer. In a debate largely moderated by journalists from ABC, the participants sparred over health care, race, and electability — and, briefly, climate change.

The candidates have often struggled to debate climate change — they universally agree that the United States should rejoin the Paris Agreement, and moderators don’t always ask direct questions on the topic. (See: When Cory Booker was asked for the umpteenth time about his vegan diet.) During Friday’s debate, however, climate made a surprise appearance in two unexpected arenas: military spending and trade.

The assassination of Suleimani, Steyer argued, threatened the United States’ place in the world as a potential coalition-builder for climate solutions. Climate change, “cannot be solved with guns and tanks and planes,” Steyer said. “It can only be solved with diplomacy, and allies, and interactions with other countries.”

Sanders also weighed in, suggesting that the money spent on militaries internationally could be used to stop warming. “This is not an American issue, it’s a global issue,” he said. “Maybe, just maybe, given the crisis of climate change, the world can understand that instead of spending $1.8 trillion a year collectively on weapons of destruction designed to kill each other — maybe we pool our resources and fight our common enemy, which is climate change.”

The comparison of climate change spending to military spending is apt. Not only did the U.S. military receive approximately $700 billion in funding in 2019, it also emits huge amounts of greenhouse gases, more than some small countries. It’s unclear exactly how much the U.S. government spends on addressing climate change, but best estimates have it somewhere in the $13 billion range. (And let’s not mention America’s continued fossil fuel subsidies, though Sanders later did.)

As in previous debates, there was only one direct question on climate change from the moderators: Sanders was asked about his withholding support from President Trump’s new trade deal with Mexico and Canada on climate grounds. “There is not one word in that trade agreement that deals with climate change,” he said, echoing his statements in the previous debate. “I don’t know how in 2020 you could do that.”

But Warren and Klobuchar, both of whom voted for the new trade deal, pushed back, with the latter arguing that a North American trading bloc is essential for climate action. “As president, yes, I’ll work to make [climate] a part of every major trade agreement,” Klobuchar said. “But the best way to take on climate change is by getting back into the international climate agreement. It is bringing back the clean power rules. It is bringing back the gas mileage standards. And it is introducing sweeping legislation to put a price on carbon.”

The takeaway? While a couple debates have featured precious little screen time for climate change, candidates continue to insert it into the dialogue — making it clear that climate isn’t merely another issue in this race. It’s a lens through which all others can be viewed.