Environmentalists are by their nature worrywarts, so they might be tempted to freak out over Friday’s resignation announcement by Oregon Gov. John Kitzhaber (D), an unapologetic climate hawk. But he’ll be replaced by another liberal Democrat, Secretary of State of Kate Brown, so it’s not likely to trigger a green crisis in the state.

Kitzhaber served two terms as governor from 1995 to 2003, then was prevented by the state constitution from serving a consecutive third term. He returned to office in 2011 and was reelected this past November. His administration was quickly crippled, though, by accusations that his fiancée Cylvia Hayes violated state ethics laws by simultaneously advising her husband on clean energy issues and serving as a consultant to clean energy advocacy organizations.

Kitzhaber laid out a big green vision for Oregon. In 2012, he released a 10-year plan to transition the state to clean energy. In 2013, he signed the Pacific Coast Action Plan with California, Washington, and British Columbia to “account for the costs of carbon pollution” and promote clean energy. He was widely praised by enviros last year after his administration rejected a permit application for a proposed coal export terminal along the Columbia River. “[I]t is time once and for all to say no to coal exports from the Pacific Northwest,” he said a few months ahead of that decision.

But while he had ambitious plans related to climate and energy, Kitzhaber’s actual record was less impressive because for much of his tenure the legislature was not cooperative. These days the legislature is more Democratic and green — and it will now likely work with Brown to pass the same climate and clean energy measures Kitzhaber supported.

A young political junkie might think of Oregon as a liberal bastion. But, historically, it was more of a swing state. It has grown reliably Democratic in presidential elections for the same reasons that California and Washington have: greater population growth in its western cities than in its rural eastern half, and the alienating, Bible-thumping extremism of the national GOP. But Oregon also has had a tradition of electing socially moderate Republicans at the state and local level.

The result is that Kitzhaber served his first two terms with a Republican-majority state Assembly. They were constantly waging war on the state’s strong land conservation laws, like its famous urban growth boundary that protects farmland and wild areas from suburban sprawl.

“The interesting thing to think about with Kitzhaber is that because he served for so long, it was a very different time politically” during his first two terms, says Doug Moore, executive director of the Oregon League of Conservation Voters. “They called him ‘Dr. No’ because he would veto so often. He was like a goalie: It would get past your defense and he would need to make the save and he did that. He did a great job of protecting the environment.” In addition to all his vetoes, many bad land-use and anti-environment bills never even came to a vote because of his unequivocal blanket veto threat.

Oregon has no limits on personal or corporate contributions in state elections. Local industries therefore have outsized influence, especially among Republicans. “It becomes very easy to trade bad environmental stuff to get your other policy wins,” says Moore. “Most of the Oregon Republican Party is interested in eroding environmental protections. Every time there’s a Republican vote needed for something, they say, ‘This is what we want.’ Most of the time, the governor just said no.”

When Kitzhaber returned to power in 2011, the state Assembly was evenly split, and so climate progress remained limited. Even after the Democrats won control of the Assembly in 2012, there were anti-environment Democratic members. Kitzhaber’s climate victories continued to be as much about what he stopped as what he started. The state only gained a true pro-environment majority in both houses of its legislature in the 2014 election.

And so Oregon’s climate leadership to date has been uneven. The state has a renewable energy portfolio standard of 25 percent by 2035, but it is behind schedule on reaching it. It also has a clean fuel law that aims to cut the carbon emissions of gasoline by 10 percent per gallon by 2025, but the law sunsets at the end of this year. Kitzhaber supported extending it, but in 2013 a bill to do so failed in the state Senate, on a 15-15 vote, thanks to unified opposition from Republicans and one defecting Democrat.

Now that the razor-thin Democratic majority in the Senate has been expanded to 18 to 12, the bill should have no problem passing. It was okayed by the Senate environment committee earlier this month, and if it makes it to the governor’s desk, as assumed, Brown would be expected to sign it. 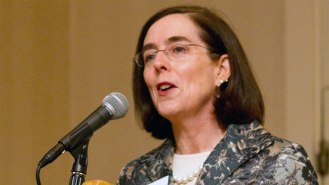 “Brown has strong environmental record from her time in the legislature,” says Moore. Her lifetime voting score from the Oregon League of Conservation Voters was 87 percent. “She was majority leader when the renewable energy portfolio standard was created [in 2007]. She voted for that and made sure to pass that.”

Note that the governor who signed the renewable portfolio standard bill in 2007 was Ted Kulongoski (D), not Kitzhaber. Even though Brown has never been associated with climate change as a trademark issue, it’s highly likely that a Democratic governor of Oregon will sign sensible climate bills passed by the state legislature. “The state of Oregon has become more liberal, progressive, and environmentalist,” says Moore. “Politicians are beginning to reflect that, although they’re a little slower than they should be.”

One reason for that slowness is the power of extractive industries and rural interests in the state’s politics. Kitzhaber himself is not immune to that power — and that’s one of the top complaints environmentalists have about him. “Kitzhaber was a strong proponent of increasing logging on federal lands,” complains Sean Stevens, executive director of Oregon Wild, a state wilderness conservation group. “He doesn’t have a vote in Congress to make that happen, but he has a bully pulpit. In 2012, he convened a task force with the purpose of trying to increase logging in federal lands in Western Oregon.” Kitzhaber also did not bring Oregon’s weak environmental rules governing logging on private land up to the same level as Washington’s and California’s. Logging has increased during Kitzhaber’s current tenure, although Stevens says that is for more complex reasons than Kitzhaber’s advocacy or the work of his task force. But, just like how West Virginia Democrats flack for the coal industry, Kitzhaber has been vociferously pro-logging. And, just like coal, logging’s economic importance is vastly overstated: It accounts for only 3 percent of all jobs in Oregon.

“We’re always banging our heads against the wall that we can do great things for the climate, but increasing logging is just undercutting those efforts,” says Stevens. Trees cut down on public land are replaced with new ones, but there is still a net carbon cost; newly planted forests may not be as effective at sequestering carbon as mature forests, and the logging process itself is energy-intensive.

Ultimately, the lesson for enviros from Oregon is that the political challenge at the state level is not so much voting in climate-hawk governors and keeping them out of trouble, it’s reshaping the whole playing field: limiting campaign contributions, electing a liberal legislature, and building a clean economy in rural areas. No one person can do it on his or her own.

These countries are making polluters pay