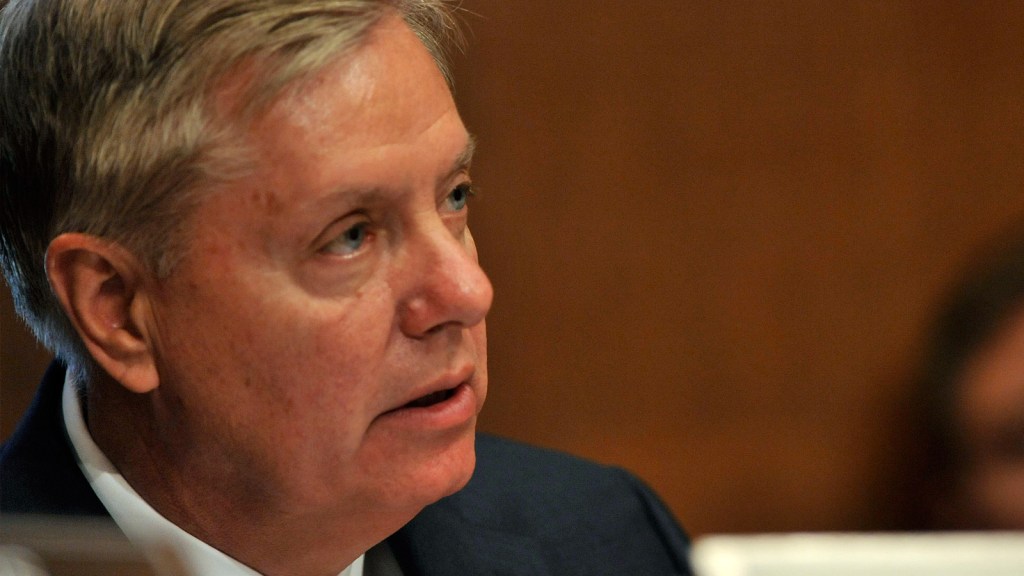 When Sen. Lindsey Graham (R-S.C.) officially entered the race for the Republican presidential nomination on Monday, he also joined an exclusive club: that of GOP candidates who have acknowledged climate change.

Graham, who is in his third term in the Senate, has gained a reputation as one of the few Republicans who has, in the past, acknowledged the science finding that greenhouse gas emissions are warming the planet and has worked across the aisle on legislation to deal with it. Among the Republican presidential contenders, former New York Gov. George Pataki is the only other candidate who has been proactively engaged on climate.

But while Graham gets a lot of credit for his views on the climate, his record on the issue has been mixed and at times contradictory.

In 2009 and 2010, Graham joined with Democrat John Kerry and independent Joe Lieberman to draft legislation that would have created a cap-and-trade system to curb greenhouse gas emissions. Graham also openly embraced the issue, arguing in January 2010 that addressing climate change “is a worthy endeavor.” And he did so acknowledging that he might get some political pushback on the issue.

“I have come to conclude that greenhouse gases and carbon pollution is not a good thing,” Graham said at the time. “Whatever political push back I get, I’m willing to accept because I know what I’m trying to do makes sense to me. … I am convinced that reason, logic, and good business sense, and good environmental policy, will trump the status quo.”

Graham consistently made the point that addressing climate would be good for energy independence, job creation, and national security.

It was all well and good for a few months. But then, just days before the trio was expected to officially introduce their climate legislation, Graham walked away from the effort, upset that Democratic leadership might move on an immigration bill before their package.

In the weeks after that, things got a little weird, with Graham saying things to reporters like:

“I’m in the wing of the Republican Party that has no problem with trying to find ways to clean up our air. We can have a debate about global warming, and I’m not in the camp that believes man-made emissions are contributing overwhelmingly to global climate change, but I do believe the planet is heating up. But I am in the camp of believing that clean air is a noble purpose for every Republican to pursue. The key is to make it business-friendly.”

He also said he would vote against the legislation he spent months helping craft.

Asked to clarify his position on climate change the following day, Graham said that the “science about global warming has changed” and that he thought it had been “oversold.”

“I think they’ve been alarmist and the science is in question,” he told reporters. “The whole movement has taken a giant step backward.”

I’d been covering the climate bill — and Graham — extensively at that time, and found it a perplexing response from someone who had, just four months earlier, argued that the Senate shouldn’t move a “half-assed bill” that lacked restrictions on carbon emissions. So I asked him again, to which he responded:

At the end of the day, I think carbon pollution is worthy of being controlled, whether you believe in global warming or not. I do believe that all the CO2 gases, greenhouse gases from cars, trucks and utility plants is not making us a healthier place, is not making our society better, and it’s coming at the expense of our national security and our economic prosperity. So put me in the camp that it’s worthy to clean up the air and make money doing so. This idea that carbon’s good for you. I want that debate. There’s a wing of our party who thinks carbon pollution is OK. I’m not in that wing.

In the years since, Graham’s statements have moderated again, somewhat. And he’s managed to maintain support from groups like the Environmental Defense Fund, whose president co-hosted a fundraiser for him in April 2014. In remarks last March, Graham stated that climate change is “real, that man has contributed to it in a substantial way” and criticized the Republican Party for lacking an environmental platform. But then he added that “the problem is, Al Gore’s turned this thing into religion.”

At his official announcement on Monday, Graham alluded to climate change without mentioning the “c”-word directly. “We must have energy independence,” Graham said. “And I believe in the process it is possible to create a safe, clean environment and create well-paying jobs for Americans of all generations.”

Graham’s campaign did not respond to a request for comment about his official campaign position on climate change.