In Fresno, Calif., there was a ceremonial groundbreaking Tuesday for California’s high-speed rail project. If everything goes according to plan, the new line will connect San Francisco to Los Angeles — in 2029.

And, yes, it’s going to cost a lot of money: $68 billion, according to the most recent estimates. We’re going to use a quarter of all the money generated by California’s cap-and-trade program to pay for … part of it.

I find myself in the strange position of agreeing with the Republican leader of the California Assembly about this. That politician, Kristin Olsen, suggested that it’s time even for people who oppose the project, as she did, to pitch in and help make sure it’s done right.

Actually, the time to make sure it was done right was back in the late 1990s. Now it’s too late to make all the most rational choices. If I could travel back in time, I’d bring a copy of Tuesday’s Fresno Bee to show to the people who fought this project, and I’d say, “Look, this is going to happen, like it or not, and we need your help in making it good.”

A rational approach to infrastructure — as opposed to a politically expedient approach — requires extraordinary political cooperation and courage. And, as I argued here, taking the politically expedient approach erodes the public’s trust in government. Torpedoing every reasonable proposal, and forcing government to eke through bad but expedient policy, may well be the Republican strategy — it certainly has been at the national level — but if that goes on too long, it’s self-defeating. In the long run it reduces the authority of politicians, and undermines their ability to do, or change, anything.

Politicians can’t make this rail line perfect, and they can’t stop it, but they could ruin it so that it goes forward anemic and malformed. That wouldn’t serve anyone, except those playing cynical games.

If politicians, on the other hand, want to actually govern, there’s still time to get the next thing right. There are plans to build high-speed rail service between Sacramento and San Francisco, and between Los Angeles and San Diego. These routes are much more likely to be profitable right away. As Dan Richard, the chair of the California High-Speed Rail Authority, told James Fallows, “If someone asked whether it would have been better to build the first leg between L.A. and San Diego, I’d be hard pressed to dispute that.”

For arcane reasons the Rail Authority can’t begin work on those until it finishes the SF-LA section. But if politicians put their shoulders to the wheel, and made it clear that these projects were actually happening, it would save a lot of money and make a much better system. Right now workers are building a massive new transit center in San Francisco, and there’s preliminary talk about constructing a second tube for BART across the bay. Imagine: both projects could be designed so as to accommodate the high-speed rail line from Sacramento. 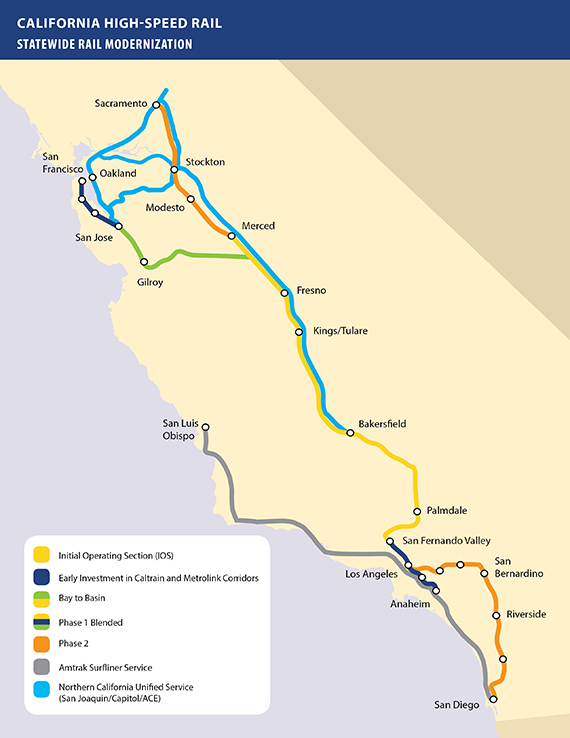 I can dream, but that’s probably not going to happen. I’d settle for government handling the obviously pragmatic and unsexy infrastructure projects, like repairing roads and bridges before they crumble.

Look, even imperfect high-speed rail will do some good (if you are convinced that the whole thing is a boondoggle, you owe it to yourself to read Fallows’ series). And it’s happening. We can argue over how money should be spent, but at this point, we’re far enough along that we should be debating what happens in addition to high-speed rail, rather that what we should do instead.

Time is running out. If we don’t start working on new infrastructure now, it’ll be our grandchildren, not just our children, who are still burning Jurassic bark while sitting in traffic jams.