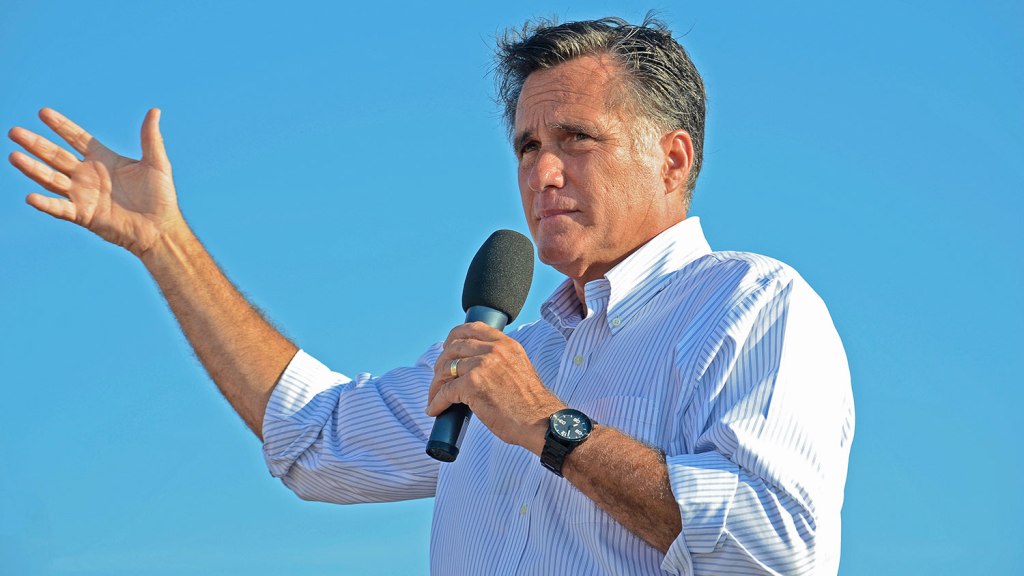 “Mitt Romney is moving quickly to reassemble his national political network, calling former aides, donors and other supporters over the weekend and on Monday in a concerted push to signal his seriousness about possibly launching a 2016 presidential campaign,” The Washington Post reported on Monday night. And he’s running hard to the right, having already called on former House Speaker Newt Gingrich and talk-radio bully Laura Ingraham to advise him.

Romney’s reputation for flip-flopping is well-established from his previous two national campaigns. In preparing for his 2008 presidential run, the former Massachusetts governor abandoned his moderate past. He switched from pro– to anti–abortion rights and tacked rightward on immigration and gay rights. In 2012, he twisted himself into elaborate pretzels attacking Obamacare while claiming that his own identical health-care reform law in Massachusetts didn’t weaken the logic of his opposition.

But Romney has largely gotten a pass from the mainstream press on a major issue that illustrates his craven pandering at its worst: climate change.

Romney, holder of a JD and an MBA from Harvard, has claimed that he would bring the rigor of data-driven management to the White House. Here’s how The Wall Street Journal described an interview with him in 2007:

“I love data.” Mitt Romney has been speaking for less than two minutes when he makes this profession.

The former Massachusetts governor is meeting with the editorial board of The Wall Street Journal to discuss his campaign for the presidency. And he starts not with the economy, “global jihad” or the country as a whole, but with himself.

While some have questioned Mr. Romney’s authenticity, the immediate impression he gives is that he speaks straight from the heart. Especially where data are concerned. “I used to call it ‘wallowing in the data,'” Mr. Romney continues. “Let me see the data. I want to see the client’s data, the competitors’ data. I want to see all the data.”

This is not only a description of his approach to business. It sums up his political outlook: “You may ask me questions about topics that I haven’t studied in depth. I’ll be happy to give you my assessment of what I think at this point. But before I would actually make a decision on a very important topic, I would really study it in depth.”

Anyone who is actually guided by data would accept the science of anthropogenic climate change, affirmed by 97 percent of climate studies published in peer-reviewed scientific journals. But Mitt Romney does not.

Of course, deep down inside, Romney probably does believe climate science, insofar as he has any beliefs at all. But when the politics of the Republican primaries changed, Romney’s supposed analysis of the data changed right along with them.

I laid it all out in a story for Columbia Journalism Review in 2012 that demonstrated the vise grip that the right-wing media has on Republican presidential aspirants:

When Mitt Romney was asked at a New Hampshire town hall in June 2011 about climate change, he probably did not think he was taking a risk by admitting that it is happening. “I believe based on what I read that the world is getting warmer,” said Romney. “Number two, I believe that humans contribute to that …. And so I think it’s important for us to reduce our emissions of pollutants and greenhouse gases that may well be significant contributors to the climate change.”

The science on the subject is clear, and Romney had said the same in 2008 without inviting a notable backlash. But this time was different. Rush Limbaugh, the godfather of modern conservative talk radio, reacted with horror. Romney had just demonstrated himself too credulous of science and Enlightenment reasoning to win the Republican nomination. “Bye-bye nomination,” Limbaugh intoned. “Another one down. We’re in the midst here of discovering that this is all a hoax. The last year has established that the whole premise of man-made global warming is a hoax, and we still have presidential candidates who want to buy into it!” …

The brouhaha might seem strange to an outsider, since Romney did not actually propose to do anything about climate change. In his campaign book No Apologies, Romney dismissed cap and trade as “radical feel-good politics.” But the conservative media no longer accept objective facts—the facts themselves must now fit the right-wing narrative. Joseph Lawler, then the managing editor of The American Spectator, explained the closed-circuit epistemology as a means of guaranteeing a preferred policy outcome: “Expressing skepticism of the science behind climate change, as for instance Gov. Rick Perry has, allows candidates to assure voters that they won’t support cap and trade or carbon taxes once they’re in office.”

Sure enough, the next time Romney discussed climate change publicly, at a town hall in Dover, New Hampshire, in August, he softened his earlier comments, saying, “I think the Earth is getting warmer …. I think humans contribute to that. I don’t know by how much. It could be a little. It could be a lot.” By late October, Romney had turned into a full-fledged climate change denier. “My view is that we don’t know what’s causing climate change on this planet,” he said at a fundraiser in Pittsburgh.

So much for letting the data guide him. You can be sure that if Romney does run again in 2016, he will continue to kiss up to the conservative base on climate change.