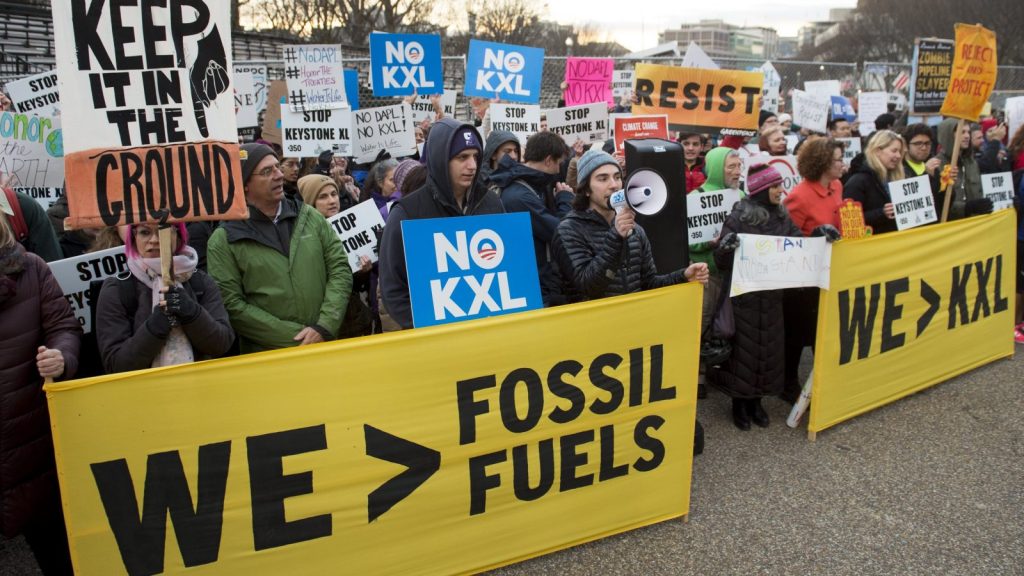 Internal government documents seen by the Guardian show that police and local authorities in Montana and the surrounding region have been preparing a coordinated response in the event of a new wave of protests opposing the controversial Keystone XL tar sands pipeline, which would carry crude oil from Canada to Montana, South Dakota, and Nebraska.

Civil rights organizations say the documents raise concerns that law enforcement is preparing to launch an even more brutal and aggressive response than the police tactics utilized during the 2016 Standing Rock movement, which drew thousands of indigenous and environmental activists opposed to the construction of the Dakota Access pipeline (DAPL) to North Dakota.

The documents are mostly emails from 2017 and 2018 between local and federal authorities discussing possible Keystone protests. They show that police officials are anticipating construction will spark a sustained resistance campaign akin to the one at Standing Rock and that police are considering closing public lands near the pipeline project.

The new records have come to light as the Keystone pipeline project has overcome numerous legal hurdles with help from the Trump administration, and as the project’s owner, TC Energy (formerly TransCanada), is moving forward with initial construction efforts.

Among the major revelations in the documents:

“There is a lot of muscle behind this effort to make sure that Keystone is constructed,” said Alex Rate, legal director of the American Civil Liberties Union of Montana, which obtained the documents through records act requests and shared them with the Guardian. “There are historically marginalized communities, primarily indigenous folks, who have grave concerns about the impact of this pipeline on their sovereignty, their resources, their religion, and culture. They have a first amendment right to assemble and make their viewpoints heard.”

Remi Bald Eagle, intergovernmental affairs coordinator of the Cheyenne River Sioux tribe, which is located along the pipeline route, said the police buildup was part of a long history of armed subjugation of native people in the region.“This is an experience of the tide of Manifest Destiny still coming at us,” Bald Eagle said, referring to the 19th-century belief that U.S. settlers had the right to expand across the continent.

The files follow repeated revelations that the FBI and other law enforcement agencies have investigated environmental groups and leftwing activists as possible “terrorists.”

Keystone XL was rejected by the Obama administration and then revived by Donald Trump shortly after his inauguration in 2017. The $8 billion project has been subject to multiple legal challenges, including over the environmental review process, but pre-construction efforts are now under way.

Opponents of Keystone XL have warned about the environmental and cultural impact of the project for a decade — concerns that came into sharper focus last month after the existing Keystone pipeline, which follows a similar route, leaked 383,000 gallons of tar sands into a swath of North Dakota wetlands.

The new Keystone records, which come from a number of government agencies and were released after a protracted legal battle, also show that officials have specifically met with police involved in the Standing Rock response to discuss “lessons learned.” North Dakota police officials told law enforcement prepping for Keystone that one of their biggest mistakes was their failure to keep activists far away and shut down access to nearby lands.

“The FBI will have primary investigative authority for all national security investigations, including but not limited to international terrorism, domestic terrorism, and weapons of mass destruction,” BLM wrote.

U.S. Border Patrol would also be available to assist law enforcement around the border and has access to “drone assets,” the document continued. Border Patrol also provided a surveillance drone that police used to track Standing Rock protesters.

Mike Glasch, an Army Corps spokesperson, said that the “by any means” comment came from the agency’s security chief, who was “relaying talking points” from police officials in Mandan and Morton County in North Dakota, adding: “Any method that we would employ to protect the safety of our employees and the public, as well as property and equipment, would be within the limits of the law and be the least invasive possible, while still protecting the public’s first amendment rights.”

A spokesperson for the Morton county sheriff, Kyle Kirchmeier, said he advises law enforcement that “may be involved with potential pipeline protests to make it their goal to keep protesters off of private property and any areas that may be considered a public hazard, such as ditches or highways,” adding that he “is supportive of people’s right to protest, but they need to do so in a lawful manner.” Kirchmeier said he did not recall the 2017 briefing.

Glasch said the Army Corps had not closed access to its land around the project, but added: “Since a construction site comes with inherent hazards, options are being analyzed for methods to keep any non-essential personnel away from potential construction sites, while at the same time considering constitutional rights.” He said it was too early to speculate about specific potential closure plans.

A spokesperson for the U.S. Attorney’s office did not respond to questions about the “terrorism” references but said the office’s “goal is to provide coordinated assistance to local, tribal, and state law enforcement to protect public safety and civil rights, and to protect federal lands, while enforcing federal law.”

A Border Patrol spokesperson said the agency would “assist, upon request, with any law enforcement activities within the border area near the pipeline.”

Spokespeople for BLM and TC Energy did not respond to questions.

“Law enforcement are getting ready. They’ve been having meetings behind closed doors,” said Angeline Cheek, an indigenous organizer from the Fort Peck reservation. “We know that they’re preparing … We’ve been preparing for the last three years.”

Rate, from the ACLU, said there was no legal justification for the government to preemptively shut down lands in an effort to stop protests. He said it was also troubling for law enforcement to prepare a “militarized” response and suggest that activists could pose terrorist or criminal threats before any actions had even begun.

“They are thinking of them as potential ‘domestic terrorists.’ There is simply no support for adopting that paradigm,” said Rate. “The public justifiably thinks of BLM as a land management agency and not necessarily in the business of arming themselves and going out and squelching protesters.”

Candi Brings Plenty, an Oglala Lakota Sioux activist working with the ACLU of Montana, said they were not surprised to learn that law enforcement was talking about stopping indigenous activists “by any means.”

“That is the type of language that has been spoken to us our whole lives,” they said, adding: “We live these injustices on a daily basis. This is finally being unveiled for what it is.”

Brings Plenty, who led a two-spirit camp at Standing Rock, said they would not be intimidated by law enforcement and hoped people would still support the fight against Keystone — instead of just accepting the pipeline.

“It’s almost become the norm for folks to look the other way, feeling like there isn’t something they can do, that it’s beyond their grasp,” they said. “I want folks to see these pipelines the way they do the glaciers in the Arctic. This is happening right here in their own front yard.”