Tuesday night, the top story on Politico.com was headlined, “‘The most expensive regulation ever’.” It is unremarkable in that it follows the same format as a thousand pieces like it, with quotes from both sides on all the right beats and no big factual errors. In another sense, though, it is a perfect artifact, a case study in how the U.S. political media handles air regulations, environmentalists, and the left generally.

The Obama administration will issue a draft air pollution rule on Wednesday that business groups charge would be the costliest regulation of all time — setting up a test of how hard the president will fight for his environmental agenda against a newly strengthened GOP.

Right off the bat, here are the two narrative frames through which Washington understands air regulations: first, their alleged high cost, and second, as a move to the left, which everyone in D.C. knows is perilous almost by definition. (Why, Republicans might get upset and oppose you!)

The Obama administration will issue a draft air pollution rule on Wednesday that health scientists say could prevent thousands of premature deaths a year — though Congressional Republicans are fighting hard to block the rule on behalf of industry groups.

Both ledes are factually accurate. The first lets business groups and costs set the stage, the second lets scientists and health benefits set the stage. How might you choose between them?

On the “other side,” you have nonprofit groups that advocate in the public interest, and a considerable body of health science.

It’s that weird inversion that makes it seem perfectly normal to begin a story about a new advance in public health with accusations from the regulated industry and its congressional champions about how much it’s going to cost. (Imagine how odd it would strike you if the article led with a quote from a poor single mother about the relief this would provide her kids’ asthma.)

The accusations from industry get no rebuttal. Instead, the story pivots into political tactics, the fight between Obama and Republicans. It’s not until paragraph nine that we return to substantive questions about the regulation … by way of letting business groups again have their say.

But business groups are just as adamant that a tough new limit on ozone would devastate the economy by making it difficult to open or expand hundreds of manufacturing plants in much of the country. “This would be the most expensive regulation ever imposed on the American public,” says the National Association of Manufacturers, which released a July study calculating that the rule would wipe out $3.4 trillion in economic output and 2.9 million jobs by 2040.

Setting the standard as low as the environmental groups want would be “insane,” said association Vice President Ross Eisenberg. Politically, he added, “I think the case can be made that it’s not worth the trouble.”

And on and on, Republicans being quoted making extravagant claims about the devastating effect of this rule on the economy.

That NAM study, which has cited uncritically by dozens of media outlets, is the sole foundation on which the right bases these claims. It has been debunked up one side and down the other. It models a stricter standard than EPA is proposing; the way it calculates costs is arbitrary and insane (seriously, click the link and read the details); it doesn’t include benefits at all. Its assumptions and modeling are designed to produce the maximum possible cost projections, which is precisely what NAM paid for. Anyone familiar with previous air rules, or technology, or the electricity sector, or math, knows it’s a joke.

Not surprisingly, NAM-funded studies — 100 percent of which are about the economic doom sure to follow any regulation — have an almost unbroken record of predictive failure. Yet each new study is greeted with renewed credulity. “Business groups” never seem to lose any credibility with the media, no matter how often they are wrong.

Finally, for those few readers who make it down to paragraph 15, we get this:

The Congressional Research Service said in October that it’s far too soon to gauge how much the regulation could cost over the coming decades. And greens say industry groups have been doomsaying environmental regulations for more than 40 years, ever since laws like the Clean Air Act were passed, only to be proven wrong again and again.

Ah, “greens say.” My favorite. Greens do say that business groups have a long history of overestimating regulatory costs. The reason greens say this is that it is true: an actual, observable state of affairs in the world. There is an extensive paper trail (see here, here, here, here, here). Yet a Politico reporter feels uncomfortable identifying it as a fact. If it is advantageous for one side or disputed by the other, it can only be something “greens say.”

Down in paragraph 22, the three remaining readers will discover why someone might want to regulate ozone in the first place: it “can trigger a variety of health problems from chest pain to asthma attacks to early death.”

At no point, here or elsewhere, does the story quantify the expected benefits of the rule, which can be found in EPA’s extensive Regulatory Impact Analysis. The current ozone standard, set during the George W. Bush administration, allows ozone concentrations of 75 parts of billion in the air. EPA proposes to tighten that standard to between 65 and 70 ppb; if it does, then in the year 2025 the new standard is expected to (quoting from EDF’s summary):

What is behind Politico’s judgment that NAM’s cost estimates, such an outlier relative to expert opinion, were worth structuring a story around, but EPA’s rigorously documented estimates of benefits were not?

Politico doesn’t get any facts wrong, though it quotes people saying ridiculous things. The piece is not overtly opinionated in support of industry. It’s competently crafted and fits comfortably into Politico’s “environmental policy” template.

The problem is the template. Industry complaints always take center stage. Hack studies from NAM and other “business groups” are treated as credible. Well-documented facts are put in enviros’ mouths — “greens say” — to shield reporters from inevitable conservative pushback. The focus is always on costs, not benefits. Politically, the fight is always Dems and EPA on the defense, Republicans on the attack. It’s one special interest (“environmentalists”) vs. another (“business”), not the public interest vs. private interests, or externalized vs. internalized costs.

Nonetheless, the ozone rule is a landmark advance in public health, achieved at modest costs to an industry that has been offloading costs onto the public for years. It will not cripple the economy any more than the last environmental rule did, or the one before that, or the one before that. Industry projections of economic doom will be wrong this time, as they were the last time, and the time before that, and the time before that. The rule will make America a more civilized and secure place for even its least advantaged citizens, which was precisely the vision that animated Congress when passing the Clean Air Act. 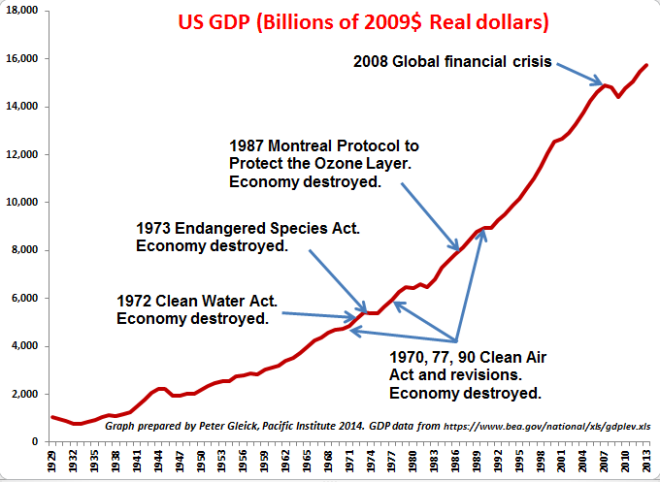 And I guarantee you this: The next time an air pollution rule is proposed, industry groups will project economic doom, again. Their claims will receive extensive airing in outlets like Politico, again. Reporters will ignore their long record of predictive failure, again. And the only pushback against those claims will be “greens say,” again.

It’s the narrative U.S. elites want. So it’s the one they get.

Also read: Here’s what you need to know about Obama’s new rules on ozone and smog

Shopping tips for the eco-minded dresser