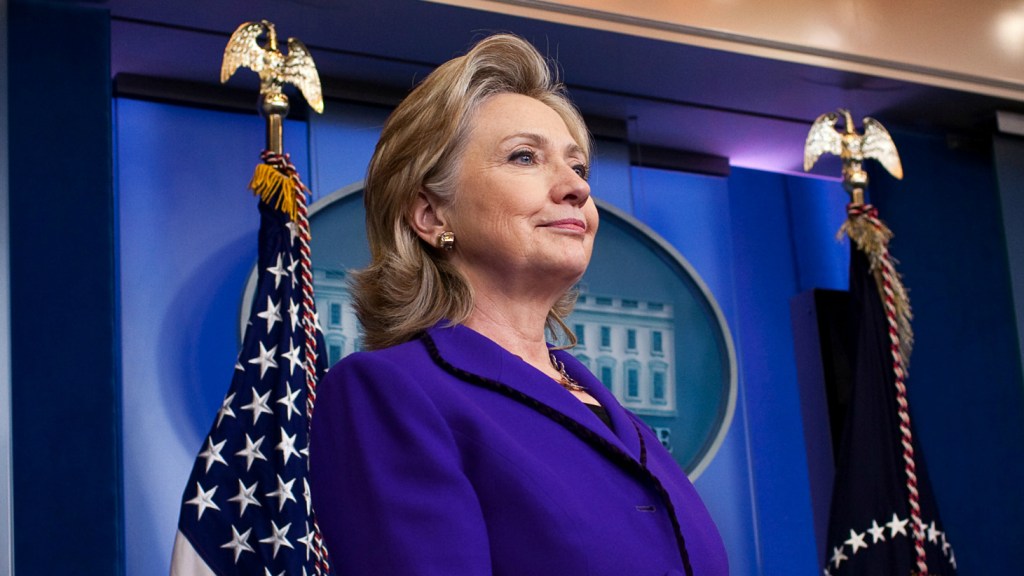 According to a new poll, Hillary Clinton has little to lose with swing state voters, and much to gain, by telling America that she’s going to make ambitious clean energy goals a part of her platform — specifically, 50 percent renewable energy by 2030, and 100 percent by 2050.

Over two-thirds of the swing state voters who were polled thought these goals were a great idea. So, perhaps not coincidentally, does the poll’s sponsor, NextGen Climate Action, the environmental lobby backed by Tom Steyer, who has made these energy targets into his own political-contribution litmus test.

The approval cut across party affiliation and it included not only the goals, but the different policies that reaching them would require, such as stronger efficiency regulations for cars, appliances, and buildings. If you’re testing policy, this is a good sign, since people often say that they approve of some idea (like budget cuts) but disapprove of what it would take to make that idea real (like letting people out of prison).

There are always some caveats with polls like these. For one thing: it was a telephone poll, conducted among 2,002 likely voters in Colorado, Florida, Iowa, Nevada, New Hampshire, North Carolina, Ohio, and Wisconsin. In my experience, millennials pick up the phone about as often as their parents open envelopes that show up in their mailbox with “You may already be a winner!” printed on the outside.

But apparently enough still do, because NextGen Climate Action reported that millennials are more excited about clean energy than their older peers, and more likely to describe clean energy in giddy terms like “inspiring” instead of just “necessary.” As a write-up of the poll puts it:

Are we looking at a generational shift in progress, as we’ve seen with marriage equality? I’ve heard plenty of people hypothesize that this is only a phase, and that millennials will grow up to become oil-obsessed Americans just like everyone else — the condition best personified by James Dean, as he gleefully slathered himself with oil and stared lasciviously at Elizabeth Taylor in Giant:

Call me biased (and I am), but I don’t think so. Big goals involving not-yet-existing technology get at a very real longing in this country, which is to be a part of an era that will be remembered for doing something big. Atom bomb big. Green revolution big. Internet big. Not just coming up with new ways to distract people using smartphones, or app-based equivalents of things that exist already, or drones that are more efficient at bombing Afghan wedding parties.

NextGen’s goals, and the language the organization uses around them, are reminiscent of those of the Apollo Alliance — a coalition of environmental and labor groups that, a decade ago, positioned a national commitment to renewable energy research and development as the modern equivalent of the moon landing. Apollo was a crowd-pleaser (American-made solar panels! Green jobs!), but it found itself kneecapped by the 2008 recession. In the new NextGen poll, green jobs still came out at the top of the popularity ranking, policy-wise, with 60 percent of respondents stating they were “strongly in favor” of clean energy training programs.

There’s another caveat with research like this, which is that, when it comes to running for president, appealing to voters is only part of what the job requires. Clinton has a renewable energy platform, but she’s keeping it vague for a reason: She has close political relationships with oil and gas firms. She worked to secure drilling sites for them while she was at the State Department. They go way back. The financial realities of running a political campaign in the U.S. suggest that she’s not likely to leave any allies out in the cold.

Which means that, while she’s tough and funny when it comes to acknowledging that climate change exists and is worrisome, the odds are good that Clinton is going to support renewable energy and energy efficiency — right up to … a point.

Where is that point? We don’t know yet. Does Clinton herself know? Maybe not.

Another way of looking at it: This poll is a push poll in disguise — one that’s designed as much to spread an idea as to gauge the public’s attitudes. The poll is put out there in the public forum, for journalists like me to analyze. But really, it has an audience of one, and that audience is Hillary Clinton.