Hillary Clinton has a renewable energy plan, but she still needs one for fossil fuels 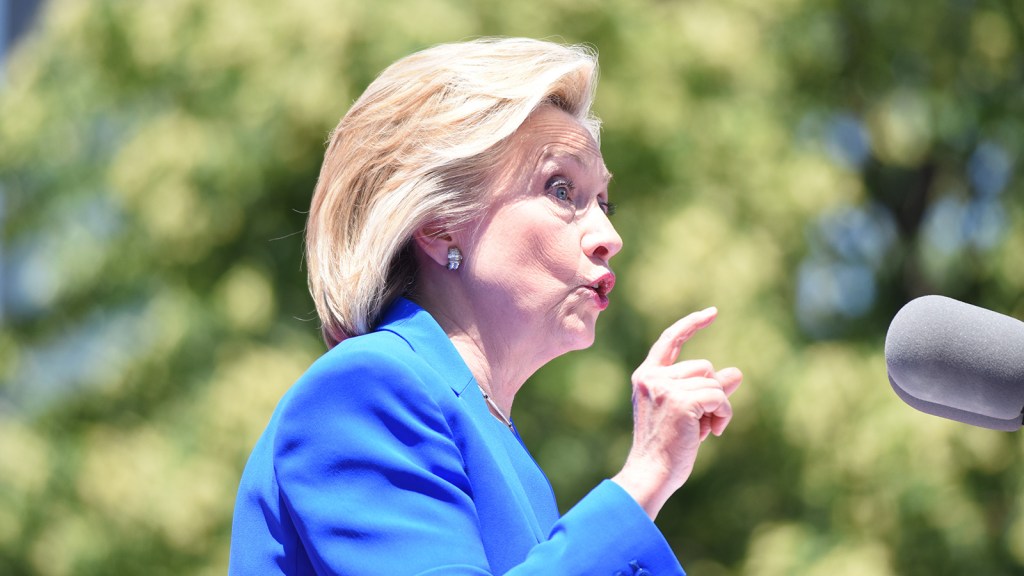 Hillary Clinton has a renewable energy plan, but she still needs one for fossil fuels

Hillary Clinton’s new renewable energy agenda has impressed climate hawks with its ambition. But some activists worry that Clinton still isn’t standing up to fossil fuels. And if she doesn’t, she won’t have crucial bargaining chips that might help get her renewables agenda through a Congress controlled at least partially by Republicans.

Clinton started fleshing out her climate and energy policies with a video posted on Sunday and a speech Monday in Iowa. She laid out the first two planks of what her campaign promises will be a multi-pronged platform for tackling climate change. According to her campaign, as president, Clinton would ensure that “the United States will have more than half a billion solar panels installed across the country by the end of her first term, and that by 2027, the United States will generate enough clean renewable energy to power every home in America.”

Those are high targets. Her solar goal would mean increasing the country’s solar energy generation capacity sevenfold. And to meet her 2027 goal, renewables’ share of U.S. electricity generation would have to increase from about 14 percent today to about one-third. Since hydropower accounts for roughly half of the current 14 percent renewable energy portfolio, and large-scale hydro capacity is basically maxed out, Clinton is really calling for solar, wind, and geothermal together to quadruple.

That sounds great, but it’s unclear how she proposes to make it happen. Her campaign released a fact sheet that is light on numbers and heavy on vague ideas like creating “competitive grants and other market-based incentives” for states and “awards for communities that successfully cut the red tape that slows rooftop solar installation times.”

Despite its ambiguity, Clinton’s plan attracted immediate and fulsome praise from mainstream environmental organizations. Tiernan Sittenfeld, senior vice president for government affairs at the League of Conservation Voters, called it “the kind of leadership we need to ensure that our nation leads the world in building a clean energy economy.” Tom Steyer, the founder of NextGen Climate, who hosted a fundraiser for Clinton in May, said it is “an ambitious framework to put our nation on a path to a clean energy economy.”

But some climate hawks, while pleased with Clinton’s new ideas on their own terms, are disappointed that she isn’t attacking fossil fuel dependence from every angle, and wonder if she ever will. Clinton still hasn’t broken out of the “all of the above” energy policy mold.

“Clinton’s climate plan is remarkable for what it doesn’t say, yet,” said R.L. Miller, founder of the Climate Hawks Vote super PAC. “No effort to keep fossil fuels in the ground, no price on carbon; no word on Keystone XL, Arctic oil, or other carbon bombs; no word on fracking; no call for adaptation.”

Bill McKibben, founder of 350.org, made similar points: “Hillary Clinton is half the way there. … Now, we need Clinton to show she understands the other half of the climate change equation — and prove she has the courage to stand up against fossil fuel projects like offshore and Arctic drilling, coal leasing in the Powder River basin, and the Keystone XL pipeline.” (McKibben, a Grist board member, recently wrote an open letter to Clinton in Grist laying out his hopes for her climate agenda.)

Clinton has a commanding lead in national polls on the Democratic presidential field, but she is facing two challengers who have shown a lot more willingness than she has to crack down on fossil fuels. Former Maryland Gov. Martin O’Malley has released a detailed climate platform that not only calls for a fully renewable electricity portfolio by 2050, but would place a number of limits on fossil fuel production and exportation. Sen. Bernie Sanders of Vermont has not yet issued a campaign climate plan, but he is already on record as standing up to corporate fossil fuel interests, for example by opposing the Keystone XL pipeline proposal. Sanders has also been a solar advocate, and while Clinton has yet to follow his lead on Keystone, she is trying to move in on at least some of his turf. “We ranked Sanders the No. 1 climate hawk senator in the 113th Congress because he wrote a 10 Million Solar Rooftops bill, among others,” said Miller, referring to the Climate Hawks Vote Senate rankings, “so at first glance it appears that Clinton is trying to out-solar Sanders.”

Both Sanders and O’Malley have pledged that their campaigns will not take money from fossil fuel companies. Clinton, on the other hand, is raking in contributions from dirty energy executives and their lobbyists.

Activists have asked Clinton at events — most recently right after her climate speech Monday — whether she would commit to ending fossil fuel extraction on federal lands and rejecting Keystone. Her answers: no and no. On public lands, Clinton says she wouldn’t ban extraction until renewable capacity had grown enough to fill the fossil fuel void. Her argument has surface plausibility, but is actually backward: Reducing fossil fuel production, thus making fossil fuel consumption more expensive, is one way we can make renewables more attractive to consumers and investors and grow our renewable energy production. Clinton appears to understand this — that’s why her campaign refers to CO2 regulations for coal-fired power plants as “a crucial tool” to “level the playing field for and increase the deployment of renewable energy” — but she resists taking it to its logical conclusion. On Keystone, she simply refuses to take a position at all.

Essentially, she proposes to boost renewable capacity but not to curb fossil fuel production. Here’s the big problem with this approach: Much of what Clinton proposes to do for renewables would require congressional action because it would involve spending money, while rejecting Keystone or slashing fossil fuel extraction on public lands would not. (To permanently ban extraction on federal lands would require passage of a bill through Congress, but the president has the authority to simply not issue fossil fuel leases during the duration of her term.) And if Clinton agrees up front to stick with the status quo on fossil fuel extraction, then she is throwing away points of leverage she might be able to use to get approval from Congress for some of the clean energy policies she proposes.

In a policy wonk’s paradise, we wouldn’t be having all these petty arguments about this pipeline or that coal export terminal. There would be a global fee on carbon emissions that would make polluters pay the climate cost of their activities. That fee would shift consumption and investment toward renewables and it wouldn’t matter all that much whether the declining amount of coal that Japan burns comes from Wyoming or Mongolia. But we don’t live in that world. We live in a world where even a national carbon price is out of reach because Congress is controlled by Republicans who don’t accept climate science — and those Republicans will maintain control of at least the House for the next few years. In the real world, the next president is highly unlikely to get Congress to approve either funding or policies to promote a dramatic surge in solar. So, climate hawks argue, the president should do everything in his or her power to reduce fossil fuel extraction, making dirty energy more expensive, and to block fossil fuel infrastructure, making sure we’re not locked in to bad choices. That would nudge the market toward renewables.

If Clinton came down hard on fossil fuels right out of the gate, that might also give Republicans in Congress more incentive to come to the table and strike bargains for the kinds of legislation — carbon pricing, renewable investment — that climate hawks really want. In 2009-2010, Sens. John Kerry (D-Mass.), Joe Lieberman (I-Conn.), and Lindsey Graham (R-S.C.) were trying to wrangle Republican votes for a cap-and-trade bill in the Senate by including offshore oil drilling in the package. Then Obama screwed them — and the climate — by just opening up more offshore drilling through executive action. The trio of senators were furious, and the climate bill crumbled.

There’s an argument to be made that the president must not overplay his or her hand. Perhaps doing everything theoretically possible to clamp down on fossil fuels would be too unpopular with the public, which tends to favor both fossil fuel production and carbon regulation. But wherever the strongest negotiating position might be, it surely isn’t giving the fossil fuel industry what it wants without getting anything in return before the negotiation has even begun.

Still, while hard-core climate hawks are disappointed by the limited nature of Clinton’s proposals so far, they acknowledge that her platform represents real progress. McKibben called it “a credible commitment to renewable energy.”

Solar and wind capacity is already growing rapidly, so a cynic might wonder how much improvement Clinton’s plan would spur beyond the trajectory we’re currently on. But experts say there is no natural course of events in the energy market: everything is affected by policy, and Clinton is proposing to move policy a lot further in the right direction.

“We are in a very fluid situation,” says Bruce Nilles, senior director of the Sierra Club’s Beyond Coal campaign. “There is a huge amount of pushback on the existing programs for clean energy.” For example, at the state level, utilities and right-wingers are teaming up to roll back renewable portfolio standards. Nilles points to Ohio, where a clean energy standard was building up the renewable industry there until last year when the state legislature and Gov. John Kasich, now a Republican candidate for president, bowed to pressure to freeze the standard. “In a world where the coal industry runs the political show, as they do in Ohio, you can stymie clean energy,” says Nilles. “Having programs in place that would increase renewables sevenfold is a huge step forward from where we are.”

But Clinton still must give details on what her renewable energy programs would entail, how much they would cost, and how she would get Congress to pass them. Maybe when she’s forced to think about actually getting anything through the House and Senate, she’ll realize the value of at least threatening to do everything within her power to keep fossil fuels in the ground.