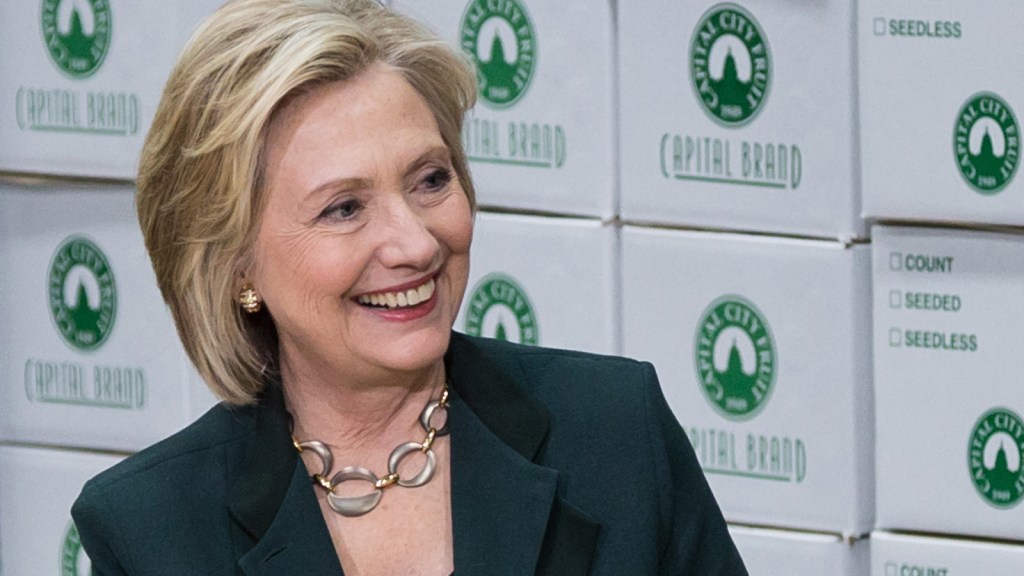 Hillary Clinton is taking the fight to climate science deniers. And she’s doing it with an appealingly edgy sense of humor.

Clinton first previewed the theme in her campaign kick-off speech in New York City last month. Immediately after criticizing Republicans for “promising lower taxes for the wealthy and fewer rules for the biggest corporations,” Clinton segued into a jab at the pathetic new Republican line on climate change: “Ask many of these [GOP] candidates about climate change, one of the defining threats of our time, and they’ll say: ‘I’m not a scientist.’ Well, then, why don’t they start listening to those who are?” She then returned directly to her broader complaint about the GOP’s zeal for deregulation, saying, “They pledge to wipe out tough rules on Wall Street, rather than rein in the banks that are still too risky.”

This was a shrewd way of framing the issue. It might seem that Republicans’ climate science denial and their opposition to financial regulation are unrelated. But Clinton understands they are both manifestations of the GOP’s unpopular tendency to side with big corporations over the public.

Clinton has continued to hit this issue with a tone that alternates between mockery and dismay. In the video released Sunday night to roll out the first component of Clinton’s climate and energy agenda, she used an earnest tone, as if shaking her head in disbelief, when she said, “It’s hard to believe there are people running for president who still refuse to accept the settled science of climate change, who would rather remind us they are not scientists than listen to those who are. You don’t have to be a scientist to take on this urgent challenge that threatens us all. You just have to be willing to act.” The screen fills first with idiotic statements from the Republican candidates dismissing climate science, then footage of extreme weather events.

On Monday, her campaign went for the funny — and the jugular — by releasing a dead-on imitation of a trailer for a classic black-and-white horror film about “the mad (not a) scientists.” It intersperses vintage film footage and a comically ominous soundtrack with some of the Republican presidential field’s many prominent climate science deniers offering talking points of escalating absurdity.

Also on Monday, in a speech in Iowa, Clinton went on the attack on the issue in more depth than she had previously:

Now, I know there are still people who would rather not hear this. Some deny climate change exists at all. Others throw up their hands and say, “Sorry, I’m not a scientist.”

Well, I’m not a scientist either. That’s why I think it’s important to listen to scientists. It’s important to heed the warnings based on extensive scientific research to see what’s going on here in our own country and certainly around the world.

The reality of climate change is unforgiving — no matter what the deniers say. Sea levels are rising. Ice caps are melting. Storms, wildfires, and extreme weather are wreaking havoc.

Maybe great minds just think alike, or maybe someone on Team Clinton has been reading the right green websites. Whatever the reason, Clinton has adopted exactly the approach to making climate change a wedge issue that I recommended early last month — a week before Clinton started doing it, to be exact.

As I wrote then, most voters accept climate science, and they support expanding renewable energy and regulating carbon pollution. The problem is that pro-environment, pro-science, moderate Republican and independent voters haven’t shown much willingness to punish GOP politicians for denying science or favoring dirty energy over clean air because climate change isn’t a high priority for them.

What climate hawks need to do, then, is use climate change as a proxy for larger concerns about the Republican candidates who deny the science: that they are backward people, and that they favor the rich and powerful over most Americans. Here’s the nub of my argument:

[C]limate hawks must … aggressively attack Republicans who deny the science of climate change or say we should do nothing about the problem. Turn the issue into a liability Republicans are nervous about. …

It is a truism in politics that a gaffe only sticks to a candidate when it reinforces a pre-existing reservation voters may have about him or her. …

What are the negative stereotypes that younger, more educated, urban, and non-white voters hold about Republicans? That they are ignoramuses who reject science, that they are selfish, greedy, or in the pocket of big business, and that they are old and out of touch. Climate change lends itself to attacks that play on all of these themes.

Say what you will about Clinton’s substantive moderation and her coziness with corporations, but she’s a political fighter who isn’t afraid to press an advantage. Other political leaders are exploiting the same weakness: President Obama mocked the “I’m not a scientist” dodge in this year’s State of the Union address and in numerous later speeches and statements, and Tom Steyer’s NextGen Climate targeted deniers last year with ads making fun of them.

Climate change is an advantageous issue for politicians who want to do something about the problem, and it’s nice to see them start acting like it.