Now that President-elect Joe Biden has won the White House, Claire Hedberg is ready to finally get back to her chemistry homework.

Hedberg is a 15-year-old climate activist from Richmond, Virginia. Most of the time, she balances high school with organizing for the environment — protesting oil companies, coordinating panel discussions, and recruiting new members for the youth-led organizations Polluters Out and Zero Hour. But for the past few months, as Election Day drew near, her political advocacy took on a new urgency. She spent the weeks before the election phone-banking and text-banking — not only for the Biden campaign, but for down-ballot races in Virginia, including progressive candidates for Congress, mayor, and the local school board.

“I gave up my whole October for this,” Hedberg said, describing the chaotic lead-up to November 3. The presidential election in particular sapped attention that might otherwise have gone into her studies.

“Chemistry homework didn’t have much relevance to getting Trump out of office,” she said. 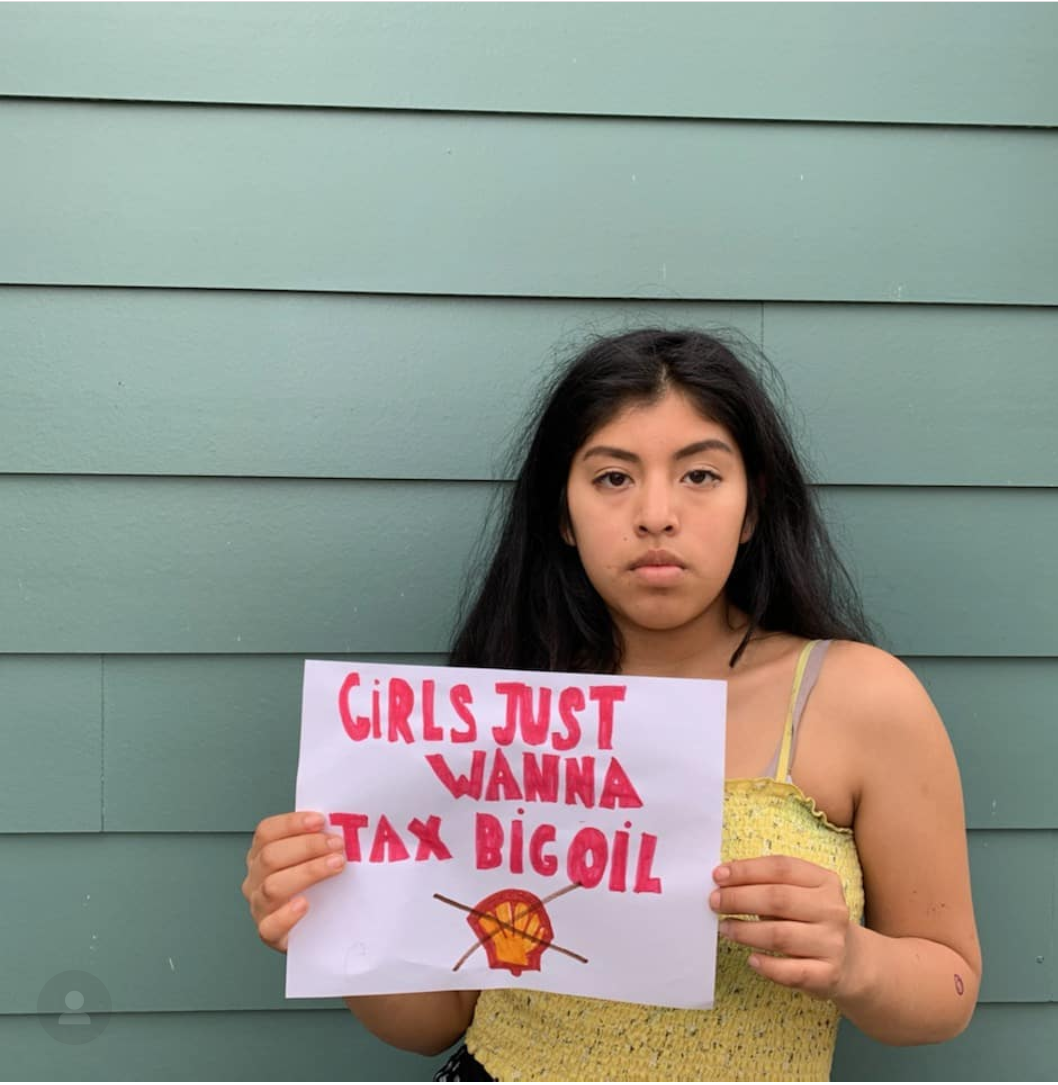 Claire Hedberg, a 15-year-old organizer for Zero Hour and Polluters Out, spent October phone-banking and text-banking for progressive candidates. Courtesy of Claire Hedberg

Hedberg is just one one of many youth climate activists who helped propel the Biden campaign to victory. In general, young people — who are disproportionately worried about climate change — favored the former vice president by a wide margin. He wasn’t the ideal candidate for climate activists, but once Bernie Sanders dropped out of the Democratic primary and the presidential race became a contest between Biden and Trump, it was clear who the environmental candidate was.

“Biden wasn’t who we had envisioned, but we were going to make the best of it,” Hedberg said. “From a climate lens, we know how important it was to advocate for him.”

Now that the results are in and Biden is slated to move into the Oval Office come January 20, youth activists are simultaneously relieved, exhausted, and tentatively optimistic. Many, like Hedberg, are eager to take a deep breath, even as they gear up for continued advocacy at the federal and local levels. In the days following Biden’s victory, I checked in with a few young climate activists to hear what they’ve been thinking.

Emily Johnson, a 17-year-old from Wisconsin and the founder of a local chapter of Fridays for Future (FFF), said she was setting up an owl box — basically a birdhouse for owls — in her backyard when the election was called. “He won the state!” her dad yelled. “Pennsylvania! He won!” Ecstatic, she immediately picked up the phone to alert FFF about the news. She’s been celebrating since Saturday. 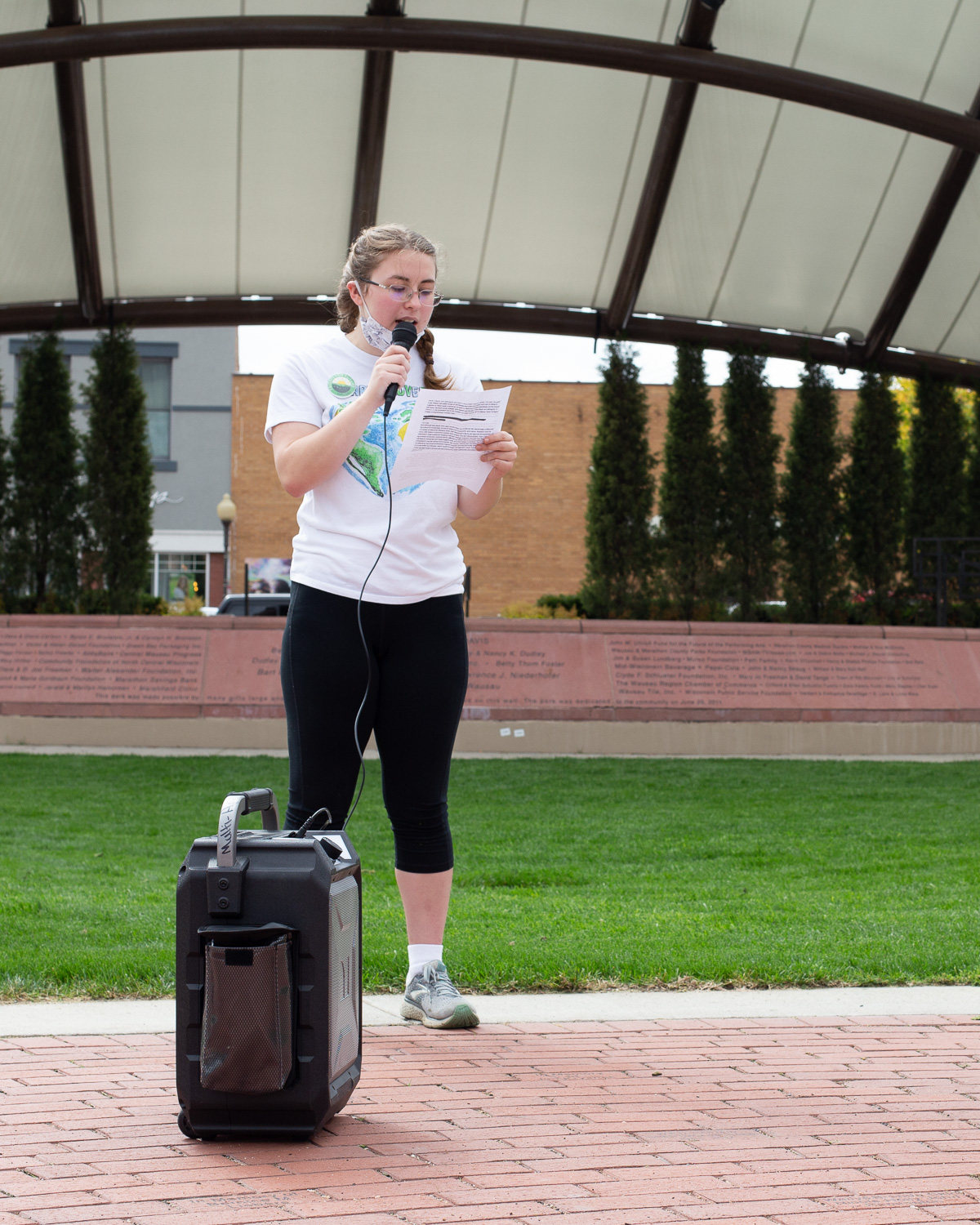 Emily Johnson, a 17-year-old from Wisconsin, at a September 25 rally speaking about how climate change will impact her state. Courtesy of Emily Johnson

But like many activists, Johnson’s celebration came with a caveat: There’s still plenty of work to be done. “Just because the president is on our side doesn’t mean it’s all good,” Johnson said. “We need to keep fighting. Politicians across the globe make promises but never meet the standards of scientists.” She wants Biden to keep the promises he has already made on climate action and then adopt even more ambitious emissions reduction targets.

Anna Hiltner, a 20-year-old co-coordinator of Divest Princeton, offered a similar assessment. “This is a difficult moment to celebrate,” she said. “We are still in the midst of a climate catastrophe, and while Biden will probably and thankfully reverse much of the damage Trump has done, none of the climate action Biden has proposed will be enough, as the coming months and years shape the future of life on this planet.” 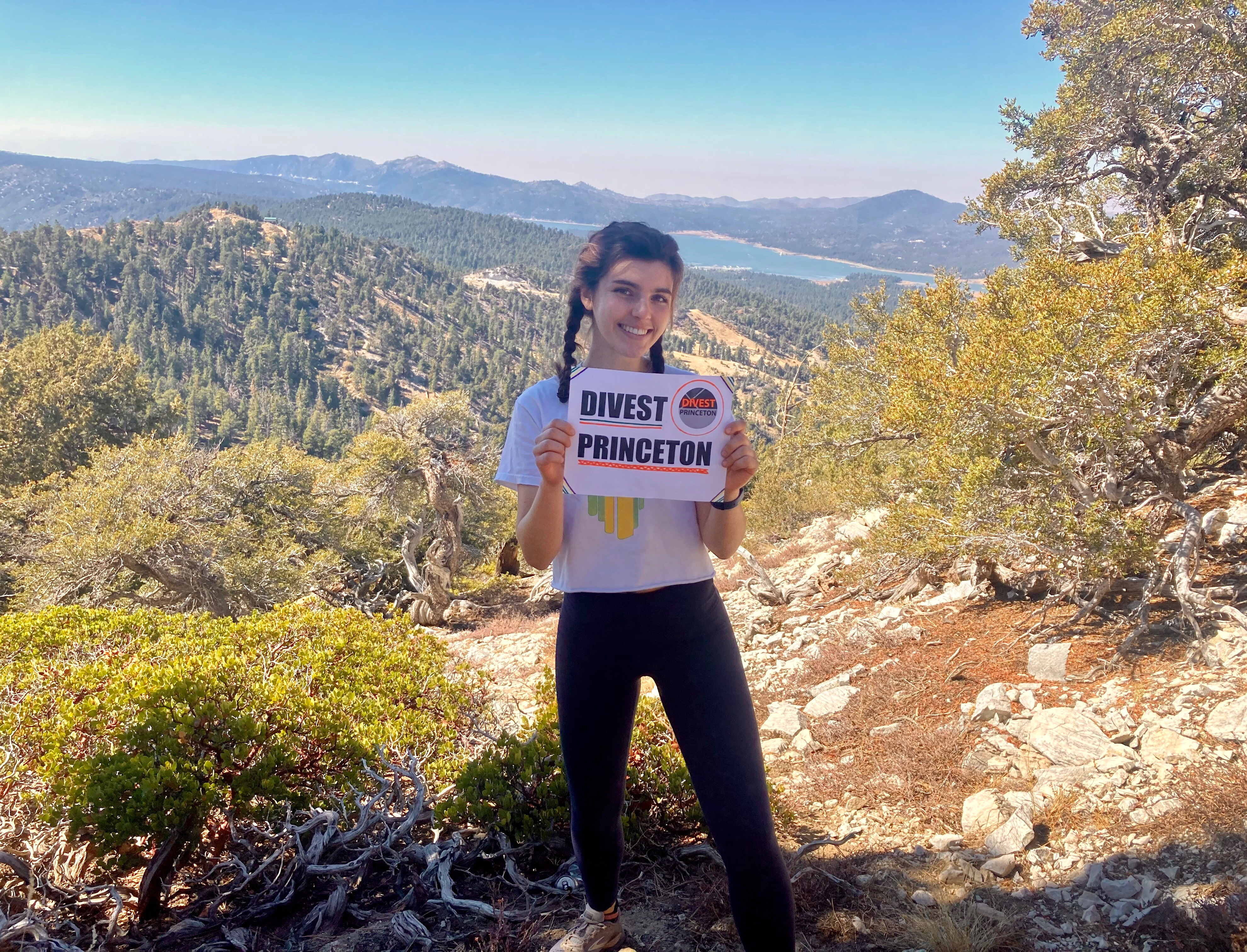 Anna Hiltner, a 20-year-old sophomore in college and a co-coordinator of Divest Princeton, is optimistic that President-elect Biden will undo environmental rollbacks from the Trump administration. But much more remains to be done. Courtesy of Anna Hiltner

Though Biden updated his climate plan over the summer to commit to spending more on reducing greenhouse gas emissions, he has repeatedly said that he doesn’t support a Green New Deal, and he has been blunt in his opposition to a ban on fracking, the oil and gas extraction technique that many environmentalists say is incompatible with a climate-stable future.

Riley Liiva and Penn Diehl, 23-year-old co-coordinators of the San Diego chapter of the Sunrise Movement, said they and other activists around the country will continue to push Biden and the Demoratic Party on progressive policy issues, like increasing access to transportation, health care, and affordable housing. “We will be working hard to reach out to politicians, protest in the streets, and show up whenever and wherever we can,” Diehl said.

Other activists are eager to turn their focus to promoting climate legislation in local politics. “We shouldn’t forget how most environmental policy is made by state and local government,” said Ryan Warsing, a 27-year-old co-coordinator for the Divest Princeton campaign. He added that nongovernmental institutions like his school, Princeton, also have a role to play in promoting environmental justice — for example, by dropping their investments in fossil fuels. (Disclosure: I am an organizer for Fossil Fuel Divest Harvard, a similar group.) 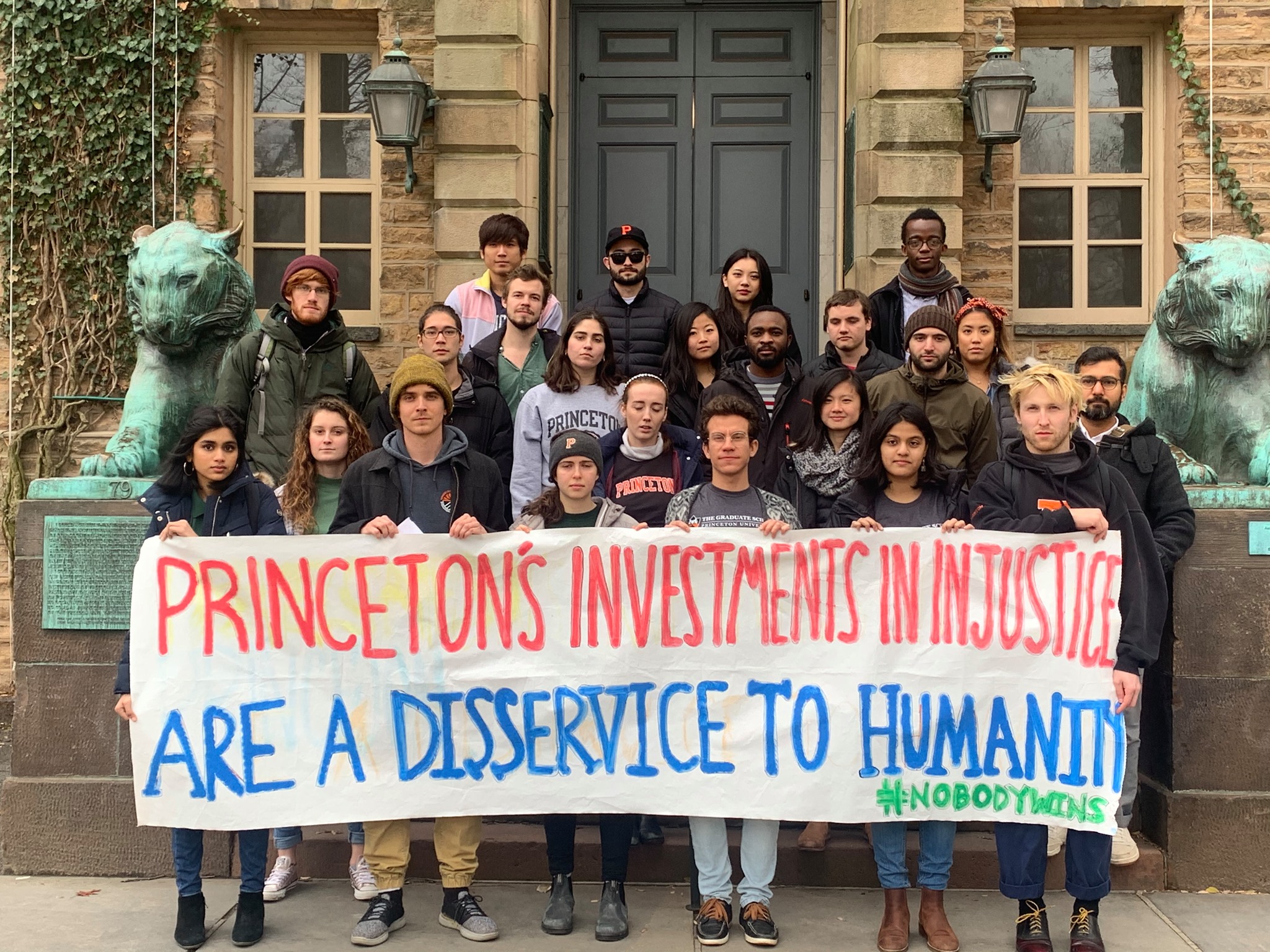 After Election Day, members of the student campaign Divest Princeton are eager to continue advocating for climate action from their university. Courtesy of Anna Hiltner

Halfway around the world in Soy, Kenya, 24-year-old climate activist Kevin Mtai is also planning future actions, but on the international level. Mtai had watched the 2020 election keenly —more so than any other American presidential race, recognizing the international climate implications of a Biden presidency. Now that Biden has won, he’s hopeful the U.S. will become a global role model for emissions reductions. 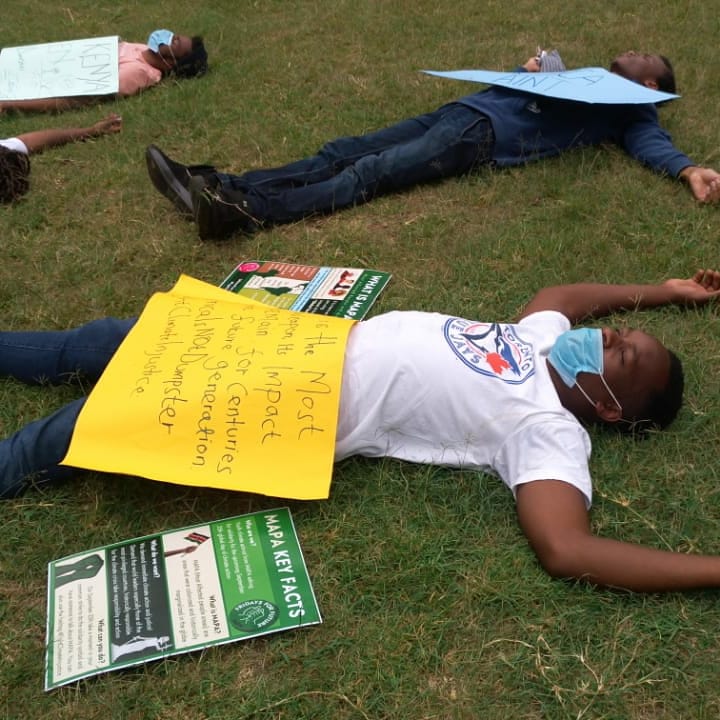 Kevin Mtai, a 24-year-old climate activist from Kenya, participates in a demonstration against about plastic waste imported to his country from abroad. Signs read “#AfricaIsNotADumpster.” Courtesy of Kevin Mtai

Meanwhile, he’s helping to coordinate a virtual, 13-day-long “Mock COP26,” a youth-run event featuring discussions on climate justice, green jobs, and more. It’s meant to fill the void created by the postponement of the official COP26 conference in Glasgow, which was supposed to take place this month but has been rescheduled for November 2021 due to the COVID-19 pandemic.

One common sentiment among climate activists: The past few months have been draining. Many of the youth organizers I spoke with were relieved at the opportunity to take a pause after a long, drawn-out, and consequential election process.

“I’m honestly just tired,” said Hedberg, back in Richmond, Virginia. “At this point, I can’t do any more. I can’t phone-bank anymore, I can’t text-bank anymore,” she said as the votes were being tallied. “I’m just healing from what has happened in the past four years.”

As the world hung in limbo, waiting for all the votes to be counted, she switched from an NPR stream of political coverage to some calming holiday tunes. The hard work of community organizing would resume, the push for climate justice would go on. But for a moment, she said, “I’ve been trying to listen to Christmas music. And concentrate more on schoolwork.”

This post has been updated to reflect that Anna Hiltner is a co-coordinator of Divest Princeton.