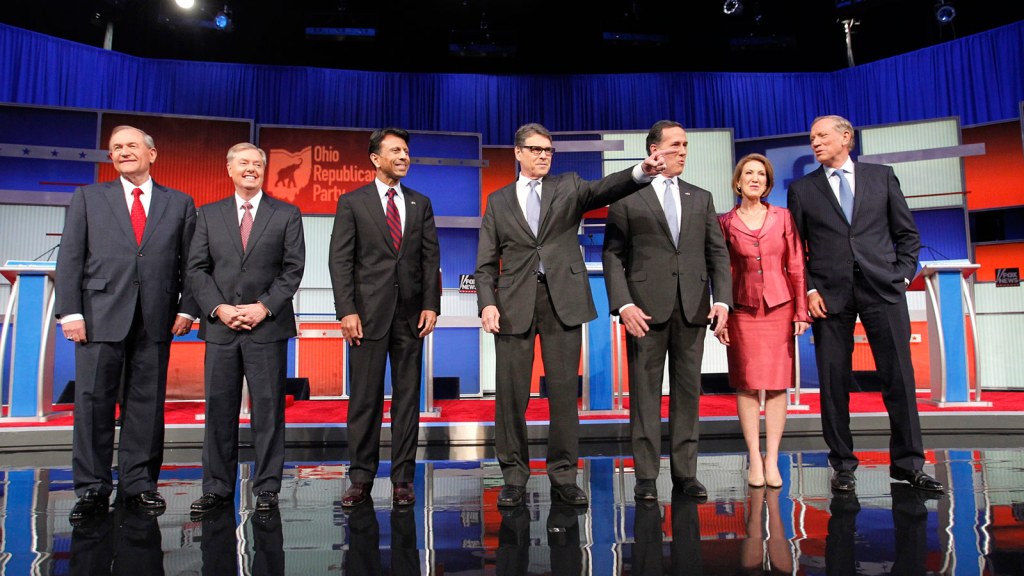 The JV squad of GOP candidates’ debate concluded moments ago in the hallowed Quicken Loans Arena of Cleveland, Ohio — an event so sparsely attended that the moderators’ voices literally echoed off the empty seats. Despite the American people’s lack of interest in anything they have to say, each of the bottom seven candidates appeared to really believe that he or she will be the next president. Loony! Cute, but loony.

Naturally, the candidates didn’t have much to say about climate change — probably because they don’t believe in it — but Fox News moderator Bill Hemmer did state that Sen. Lindsey Graham’s (R-S.C.) work on climate change (what little there is) “is extremely unpopular with conservative Republicans.” In response, Graham blinked a few dozen times — like your slightly batty grandfather would — and said:

You can trust me to do the following – that when I get on the stage with Hillary Clinton, we won’t be debating about the science. We’ll be debating about the solutions. In her world, cap-and-trade would dominate. That will destroy the economy in the name of helping the environment. In my world, we’ll focus on energy independence and a clean environment. When it comes to fossil fuels, we’re going to find more here and use less. Over time, we’re going to become energy independent. I’m tired of sending $300 billion overseas to buy oil from people who hate our guts. The choice between a weak economy and a strong environment is a false choice. That is not the choice I’ll offer America. A healthy environment, a strong economy and an energy independent America – that would be the purpose of my presidency. To break the stranglehold that people enjoy on fossil fuels who hate our guts.

Graham then went on to change the subject of the question to ISIS, which seemed to be his go-to technique. How do you feel about Planned Parenthood, the moderators asked? “ISIS!” Sen. Graham screamed while making karate-chopping motions with his hand. “ISIS HURT BABIES!”

The only other remotely notable mention of the environment was when Carly Fiorina — who is apparently running for president (who knew?!) — said she’d repeal Obama’s “latest round of EPA regulations” on her first day.

None of the other five candidates said anything worth mentioning, but at least we got this GIF out of it.