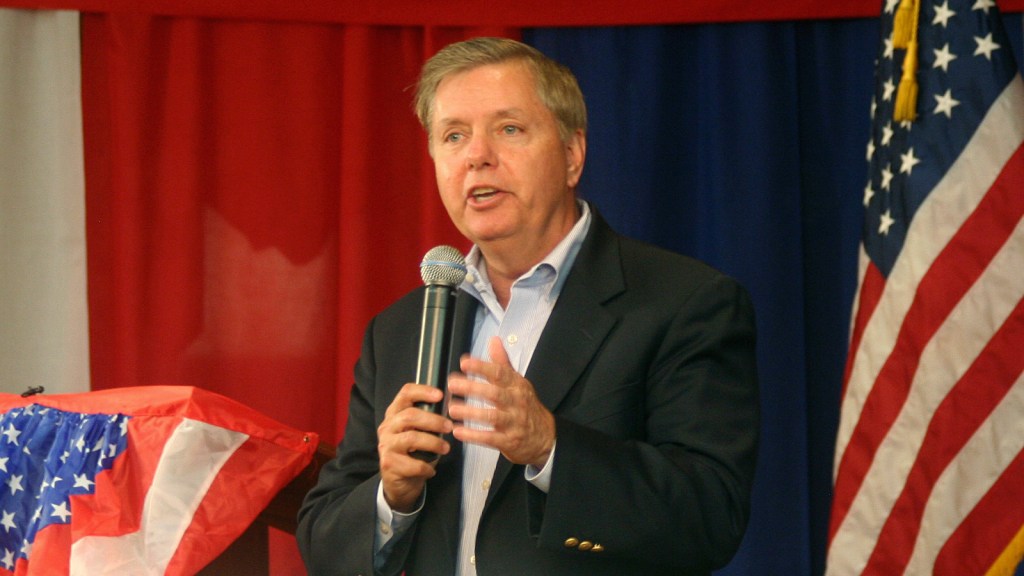 The Tea Party hates South Carolina Sen. Lindsey Graham, and the feeling is mutual. It attacked the Republican lawmaker mercilessly during his Senate reelection campaign in 2014, but Graham held his seat with 55 percent of the vote. “Kicking the crap out of the Tea Party is the most fun Senator Lindsey Graham has ever had,” wrote Molly Ball for The Atlantic last June after interviewing the South Carolina Republican on the eve of his primary election victory, when he faced six no-name challengers, one of them a Tea Party pick, in his deep red state’s Republican primary.

On June 1, Graham plans to join the crowded GOP 2016 field, according to his preannouncement on Monday. And his soon-to-be presidential campaign raises the question: How will the Graham/Tea Party feud continue?

The animosity between this three-term senator and Tea Partiers began before his 2014 reelection campaign, triggered in part by Graham’s intermittent attempts to work with Democrats in the Senate. Such moves have enraged staunch conservatives. The Greenville GOP compiled a list of 29 offenses that they “strongly disapprove of and hold to be fundamentally inconsistent with the principles of the South Carolina Republican Party.” Right-wing blogs have nicknamed him “Flimsy Lindsey” and “Grahmnesty” because he disagreed with his party on climate change, immigration reform, and a few other hot-button Republican issues.

Climate change triggered the first Tea Party salvos against Graham. In the fall of 2009, Tea Partiers in South Carolina and beyond bashed Graham for his support of energy legislation that aimed at reducing carbon emissions. In an editorial titled “Graham’s Dalliance With Cap-And-Trade Crowd a Bad Move,” Michael Costello of the Idaho’s Lewiston Tribune wrote, “If Republicans really want to completely alienate this crowd and give birth to a third party, they should follow the lead of Senator Lindsey Graham (R-SC). [He] has thrown his lot in with John Kerry (D-Mass) to push one of the worst pieces of legislation in American history, the carbon cap-and-trade bill.”

Soon after that, as Politico reported, the conflict between Graham and Tea Partiers “sparked a mutiny back home” in South Carolina. The Charleston County Republican Party, in a written resolution, slammed Graham for stabbing Republicans in the back and undercutting “Republican leadership and party solidarity for his own benefit.” Politico noted that “bubbling” conservative discontent blew up because of the climate change bill but was also fueled by Graham’s support for immigration reform and changes at the U.S. detention facility Guantanamo Bay. Graham, a hawk who often criticizes President Barack Obama’s national security policies, didn’t try to make peace with his conservative critics. Instead, he called detractors of immigration reform “bigots” and refused to disavow or stop his occasional bipartisan efforts.

“I’m making that a Tea Party goal to get scoundrels like Lindsey Graham out of office,” Greg Deitz, a Charleston Tea Party organizer, told Politico.

In 2010, about 100 Tea Party activists gathered outside Graham’s office in Greenville, S.C., to protest his support for the bipartisan climate bill. “No cap-and-trade,” they chanted. Two different countywide GOP organizations in South Carolina voted to censure Graham noting that “in the name of bipartisanship — [he] continues to weaken the Republican brand and tarnish the ideals of freedom, rule of law, and fiscal conservatism.”

Tea Party activists routinely booed him when he spoke at town hall meetings. At one gathering at the Bluffton Library in June 2010, activists in the audience interrupted Graham with angry questions and accusations when he asked what the biggest problems facing the world were. One audience member, according to the Beaufort Gazette, told Graham to “be conservative and quit reaching across the aisle.”

Graham further upset the Tea Party by meeting with Obama several times to discuss working together on various issues, such as “closing Guantánamo Bay and bringing terror suspects to justice,” according to Newsweek. Graham was a former military prosecutor who served on the Armed Services and Homeland Security Committees, and Joe Biden invited him over to his home for a steak dinner to discuss Afghanistan.

In July of 2010, Graham told the New York Times that the Tea Party would “die out” because “they can never come up with a coherent vision for governing the country.”

A few months later, though, Graham tried to mend a few fences. In September, during a private meeting with Tea Party organizers in North Charleston, he attempted to address Tea Partiers’ concerns. Later, he praised the movement in interviews, including one with Politico where he said Tea Party activists “[came] to Washington talking about reducing spending. Thank God they’re here.” He even tried to get the Senate’s two Tea Party caucus founders, Rand Paul and Mike Lee, to help him push legislation on Social Security in 2011, which would raise the retirement age to 70 and cut retirement benefits for the wealthy. By August 2011, around the second time he asked for a private meeting with local Tea Party leaders, Graham bragged to the Associated Press that his new push for fiscally conservative policies had united him with the conservative right.

The détente did not hold. When Graham was up for reelection in 2014, Tea Partiers were chomping at the bit to defeat him. The only thing they lacked was a candidate who could win in a Republican primary, where Graham needed 50 percent of the vote to avoid a run off.

“There was speculation that he would face severe Tea Party resistance,” says Robert Wislinski, a political strategist based in South Carolina. “[But] that never really materialized.” Graham raised $13 million for the primary race, and mobilized a powerful campaign. Five challengers who were seeking their first elected office, and one incumbant state senator, ran against him, but their combined campaign war chest was only about $2 million. The Republican opposition was split, and Graham’s opponents weren’t particularly well known. Nor did the opposition get any help from national Tea Party activists like Sarah Palin, who remained silent on the race. “The conservative opposition could not unify for the singular purpose of defeating Graham,” wrote the conservative blog RedState in January, and Graham won with 56 percent of the vote.

So Graham beat the Tea Party and went on to win easily the general election. But will his presidential bid give Tea Partiers another chance to cause him political pain?

So far, the Tea Party has been silent on his campaign. The South Carolina Tea Party convention did not respond to request for comment, and neither did multiple national Tea Party organizations.

Either way, Graham’s hawkish rhetoric and lack of national popularity make his chances for election pretty low. If the Tea Party has their way, those chances might be even lower.