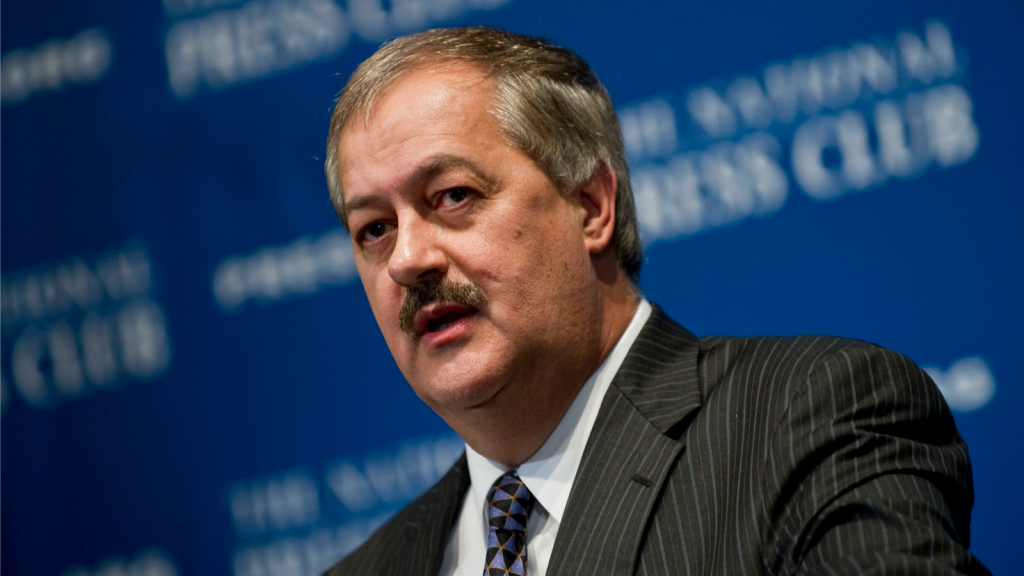 In 2004, with his company facing a $50 million fraud judgment, Don Blankenship, then the CEO of coal giant Massey Energy, spent $3 million in a successful effort to elect a little-known attorney named Brent Benjamin to the West Virginia Supreme Court, where Blankenship planned to appeal the judgment. A few years later, Benjamin voted to overturn the $50 million verdict. It was such a perfect illustration of money’s corrupting influence that it inspired a John Grisham novel.

Twelve years later, Blankenship has been sentenced to a year in prison for conspiring to violate mine safety regulations in the lead-up to a deadly explosion at one of his company’s mines in 2010. But the legacy of his political activism in the state — where he poured millions of dollars into conservative candidates and causes — has not ebbed. As Benjamin runs for reelection for the first time on Tuesday, following a 12-year term, funds from Blankenship allies are again flooding the race. But this time, this outside money is working against Benjamin, whom Blankenship’s allies deem insufficiently conservative. And Benjamin, without the financial backing of the business community, has been forced to turn to the very public financing system that was established as a response to his initial Blankenship-funded election.

Benjamin’s 2004 race haunts this year’s contest. The state Supreme Court justice he challenged that year was a liberal stalwart named Warren McGraw. Blankenship anticipated he would lose his appeal unless he could change the makeup of the five-member court, so he spent about $3 million to elect McGraw’s Republican challenger, Benjamin, then a Charleston attorney. Much of that money was channeled through a nonprofit called And for the Sake of the Kids, which ran ads accusing McGraw of voting to set a child molester free. Blankenship also personally paid for ads supporting Benjamin, solicited money to help elect him, and sent out letters urging doctors to donate to Benjamin’s campaign on the grounds that he would help lower their malpractice premiums, according to court documents.

Benjamin won. When Blankenship’s case came before the state Supreme Court a few years later, Benjamin joined a 3-2 majority in support of Blankenship and Massey Energy, tossing out the $50 million judgment.

That wasn’t the end of the case. Hugh Caperton, the man who had sued Massey, appealed to the U.S. Supreme Court on the grounds that Benjamin’s failure to recuse himself violated his right to a fair trial. The Supreme Court agreed with Caperton and sent the case back to West Virginia to be reheard with Benjamin recused. (Blankenship won again on the basis that the case should have been filed in the state of Virginia, where it is ongoing.)

Now, as he campaigns for reelection, Benjamin has found the dynamics that helped put him on the bench 12 years ago reversed. In 2004, Blankenship carried the torch for conservative causes in the state; today, Blankenship’s former personal aides continue his work to elect Republican legislators and pro-business justices. The difference is that Benjamin is no longer one of the candidates they favor.

“They’ve turned on him viciously,” says Tim Bailey, a prominent plaintiff’s lawyer who often challenges the coal companies in the state.

Operatives and allies once in Blankenship’s orbit are now actively working against Benjamin. Greg Thomas, whom Blankenship hired to run And for the Sake of the Kids, was until last year the executive director of a conservative legal advocacy group called West Virginia Citizens Against Lawsuit Abuse (CALA). Last summer, CALA began raising questions about Benjamin’s record, highlighting cases where Benjamin joined the more liberal justices in favor of personal-injury plaintiffs and against the interest of businesses. When a conservative lawyer named Beth Walker announced that she would challenge Benjamin last June, CALA supported her. (CALA’s current executive director, Roman Stauffer, ran Walker’s first Supreme Court campaign in 2008, which she narrowly lost.) Thomas, who is now a Republican consultant, told the Charleston Gazette-Mail last year that Blankenship spent heavily on the 2004 race in order to unseat McGraw — not because he particularly liked Benjamin.

Walker was formerly a partner at one of the state’s top corporate law firms, Bowles Rice, which frequently represents coal companies and big business. Walker’s husband, Mike Walker, is a former executive at his family’s machinery company, which was a major contractor with coal companies. Walker Machinery donated $25,000 to And for the Sake of the Kids in 2004.

Leading conservative groups have rallied around Walker, using outside spending to flood the airwaves in the final weeks before Tuesday’s election. As of May 5, the Republican State Leadership Committee, which is active in judicial elections across the country, had spent nearly $750,000 on Walker’s behalf and another $1.9 million against her opponents. The West Virginia Chamber of Commerce has spent almost $270,000 to back Walker.

“Conservative business people, who are mostly Republicans, expected that after [Benjamin] got elected that he would rule their way all the time, and he hasn’t done that,” says Anthony Majestro, a personal-injury attorney who also represents Democrats running for office. “In a couple of high-profile cases, he voted, I think the business community would say, the wrong way. I think they saw a 12-year seat up for grabs and they handpicked somebody they think will vote their way all the time.”

One case cited by CALA, the conservative legal group, as evidence that Benjamin does not deserve reelection was a 2006 decision in which Benjamin joined the majority in ruling that an injured forklift operator in Virginia had the right to sue the product distributor in West Virginia. (The only dissenting justice was photographed vacationing with Blankenship in the French Riviera the same month the case was decided.) CALA also cites a case in which Benjamin joined a 3-2 majority in finding that individuals addicted to prescription drugs could sue the pharmacies that encouraged and profited from that addiction. CALA argued that the addicts shouldn’t be able to sue because they obtained or took the drugs illegally, and CALA’s executive director wrote last November that Benjamin “decided to enable criminals and their attorneys to profit from illegal behavior.”

“CALA and the people who support them care about stopping lawsuits,” says Majestro. “And so what their problem with Justice Benjamin was, is he didn’t go far enough.”

Without the support of the business community, Benjamin turned to the state’s public financing program to fund his reelection campaign — a program that was born as a reaction to the conspicuous circumstances of his 2004 election. “From a personal standpoint,” Benjamin explained to the West Virginia radio network Metro News, “I made the decision I could not judge cases and then know that my campaign committee was going to those very same people appearing in front of me, whether they be lawyers or clients of the lawyers, and asking for money.”

But it’s not easy to qualify for public financing in West Virginia. Benjamin needed to raise at least $35,000 from a minimum of 500 individual contributors from across the state. So an unlikely group helped secure Benjamin public financing: the trial attorneys and personal-injury lawyers who go up against the coal and business interests who backed Benjamin’s 2004 election.

In 2004, Majestro helped McGraw raise money in his race against Benjamin. This year, he went to work for Benjamin. “I helped qualify him for public financing, which is among the ironies of this,” he says. Majestro says he helped Benjamin raise about $20,000 in a few days from fellow plaintiff’s attorneys.

That the plaintiff’s bar decided to help out Benjamin is a testament to his record on the bench. “Most lawyers feel that he’s conservative but very fair,” says Bob Fitzsimmons, a well-known personal-injury lawyer in Wheeling. “A lot of the stuff that went on in that whole [2004] election gives an impression that I don’t necessarily ascribe to. I always have felt that he was a really good lawyer and a good person.” Bailey says that, considering who backed Benjamin in 2004, he turned out to be “a heck of a lot more fair than we assumed.”

A group run by plaintiff’s lawyers, Just Courts for West Virginia Political Action Committee, has spent more than $200,000 on an ad attacking Walker. It invokes Blankenship’s role in the 2004 election, portraying Walker — not Benjamin — as beholden to Blankenship. “In 2004, Massey Energy CEO Don Blankenship spent $3 million to elect a Supreme Court justice,” the narrator says, not mentioning that that justice was Benjamin. “Before her first campaign, Beth Walker met with Blankenship and hired his operative to run it. Now, Blankenship’s operatives and executives are funding Walker’s current campaign.” The ad concludes, “Don’t let special corporate interests buy Beth Walker a seat on our Supreme Court.”

Benjamin and Walker aren’t the only candidates in the race. In 2014, Republicans took control of the West Virginia legislature for the first time in more than 80 years and moved quickly to pass several judicial reforms. Among them, the legislature made judicial elections nonpartisan — a longtime goal for Republicans, since Democrats still outnumber them in party registration — and eliminated primaries, instead setting the election on the day of the state’s primaries. The result is a system in which a candidate can win a 12-year Supreme Court term with a plurality of the vote in a low-turnout election.

This year, there are five candidates in the race, allowing a candidate with high name recognition to come out on top over a divided field. On Jan. 30, the deadline for candidates to file, a surprise entrant upended the race: Darrell McGraw, the 79-year-old brother of former Justice Warren McGraw, whom Benjamin unseated in 2004. Darrell McGraw is well known throughout the state. He already served as a state Supreme Court justice from 1976 to 1988, and then spent 20 years as the Democratic state attorney general. The 2014 judicial reforms, intended to help elect conservative justices, may instead hand the seat to one of the state’s most prominent liberals.

McGraw took the lead in an early poll — there have not been any recent polls — and became the main target of attack ads from outside Republican groups. The presidential primary election could also pose a problem for Walker and Benjamin. The fact that Donald Trump is now the de facto Republican nominee could dampen GOP turnout, while the Democratic primary between Hillary Clinton and Bernie Sanders is still drawing Democrats to the polls. (Trump reportedly told supporters on Thursday to stay home from the primary now that he is the presumptive nominee.) The Supreme Court hopefuls are also near the bottom of the ballots, which may run longer than 20 pages in some counties, and many voters may stop voting before they reach the end.

The number of twists and turns in this contest have made the outcome anyone’s guess. In the 12 long years since Benjamin was elected, alliances have been turned upside down, nonpartisan campaigns have replaced partisan ones, and a public financing system has emerged. But in other ways, not a lot has changed.

“If Don Blankenship drops $3 million into an election years ago with a shadow group called And for the Sake of the Kids,” says Bailey, the plaintiff’s attorney, “and [now] the Chamber and the Republican Party drop in $2 million on a nonpartisan, one-shot primary type deal, you tell me what improvement we’ve had.”