U.S. transportation policy throws minorities under the bus. Will Obama fix it? 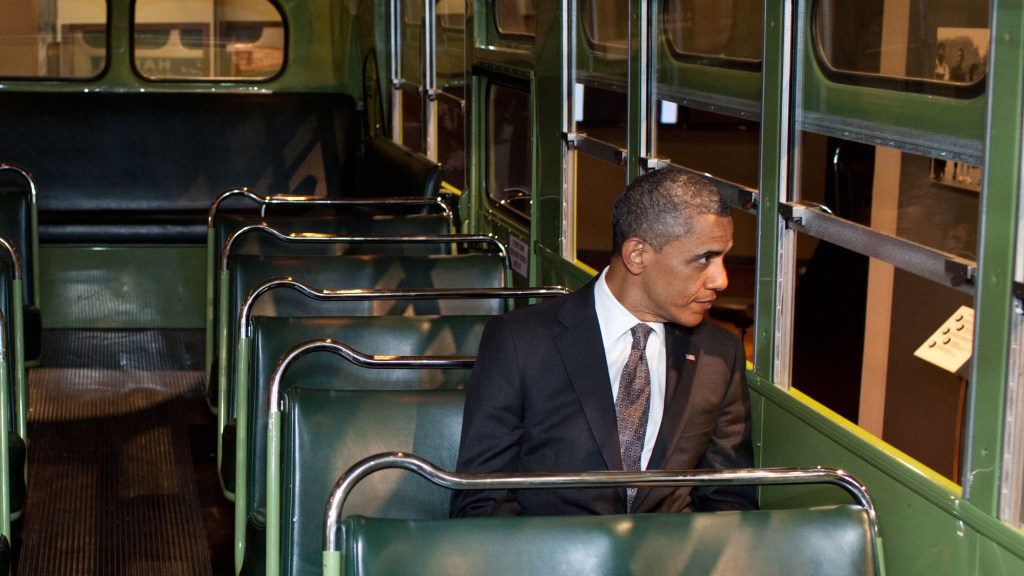 U.S. transportation policy throws minorities under the bus. Will Obama fix it?

It was somewhat reassuring to hear President Obama urge Congress to pass a new transportation bill in his State of the Union address last night. Transportation, after all, is the vital link to opportunity, especially for people of color and low-income. Sadly, it only got short mention.

Noting that “first-class jobs gravitate to first-class infrastructure,” Obama said, “We’ll need Congress to protect more than 3 million jobs by finishing transportation and waterways bills this summer.” He offered no specific priorities, though, which would have been nice, given that historically a disproportionate amount of federal funds have been dropped on highways compared to public transit. That means more money for people with wheels, and less for those who need a bus pass.

“It’s encouraging that the president understands the role that transportation has in creating shared prosperity,” Wade Henderson, president of the Leadership Conference on Civil and Human Rights told me in response to the president’s speech. “But Congress needs to step up to ensure that federal transportation policy doesn’t leave most Americans behind.”

Congress hasn’t passed a full, six-year-funded transportation authorization in over a decade. Instead, we’ve been riding on short-term updates to dated transportation policies that privilege those who already have the means — and skin color — to access opportunities.

Consider the following statistics, submitted yesterday in a written testimony to the House Subcommittee on Highways and Transit by a coalition of over 50 organizations called the Transportation Equity Caucus, of which Henderson’s organization is a major stakeholder:

We should really breathe those statistics in. They show how complicit our transportation systems are in producing many of the racial and economic divides that exist in our country today. Like most inequities in America, these happened by design. As Congress representative and civil rights stalwart John Lewis wrote in the introduction to the book Highway Robbery, “the legacy of ‘Jim Crow’ transportation is still with us. Even today, some our transportation policies and practices destroy stable neighborhoods, isolate and segregate our citizens in deteriorating neighborhoods, and fail to provide access to jobs and economic growth centers.”

Given all this, a central question is whether the Obama administration is digging hard enough to expose and dismantle the racist structures of federal transportation policy. His first transportation secretary, former Republican Congressman Ray LaHood, was a major booster of mass transit as well as bikes and “livable communities.” And Henderson noted that LaHood’s successor, Anthony Foxx, “has expressed an intention to work on the federal and local level to make more jobs possible and accessible for all communities.”

Right now, Foxx is riding high on a $549.5 million loan his department just issued to expand Los Angeles’s light rail line through Crenshaw, a long-held hub of the African American community there. “When this rail line opens in five years, it will be the first rail transit line to cross South L.A. in a generation and the first to open along the Crenshaw Boulevard corridor since 1955,” Foxx wrote in a recent blog post. “It will bring the people of this community to their jobs in other parts of the city and also bring jobs to the people of Crenshaw.”

Dismantling the privilege cooked into how government creates and funds policies means making targeted investments like this — and sustained investments, not one-offs. This shouldn’t be a controversial thing. A poll conducted by the Rockefeller Foundation last year found that more than 70 percent of Americans support a policy agenda designed to reduce racial and ethnic inequality through investments in areas like education, job training, and infrastructure improvement.

Consider, too, that investments in transit benefit people and the climate, both, as Tyrone Davis, the energy efficiency wizard who sat with First Lady Michelle Obama at the State of the Union address reminded me.

When only certain segments of the population can easily access economic resources for advancement, that’s not opportunity. That’s called privilege. It means certain people ride first-class, as Obama alluded, while everyone else rides coach, if they ride at all. The crucial step is for the federal government to do a self-examination to interrogate how and why federal policies have been constructed in ways that leave people out of the benefits, and begin dismantling from there.

We just may see some of that in an upcoming “civil rights virtual symposium” held by the Department of Transportation. I’m looking forward to seeing what they produce.