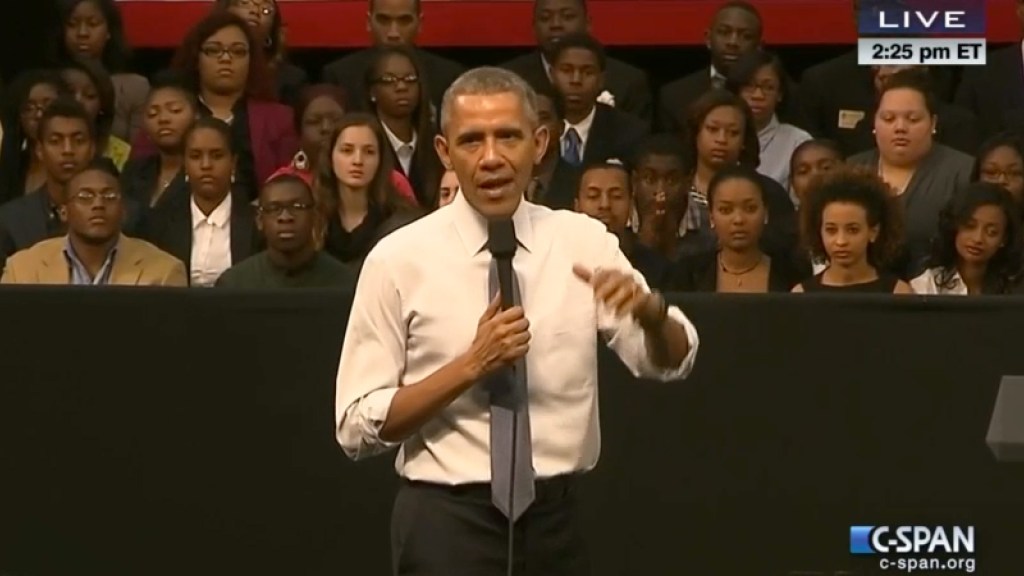 President Obama disparaged the Keystone XL pipeline and the filthy oil it would carry during a town hall event on Friday at Benedict College, a historically black college in South Carolina. This follows his dissing of Keystone at a press conference in December. Taken together, the two sets of comments make it sound like Obama might be gearing up to reject Keystone when he makes his final decision, which should happen within a few weeks or months — but that’s certainly not a sure thing.

The president also waxed professorial on climate change in front of his student audience on Friday, giving a pretty smart primer about how global warming will mess with our society and economy.

Watch him — and read the transcript below:

For those of you who haven’t been following this, the Keystone pipeline is a proposed pipeline that runs from Canada through the United States down to the Gulf of Mexico. Its proponents argue that it would be creating jobs in the United States. But the truth is it’s Canadian oil that’s then going to go to the world market. It will probably create about a couple thousand construction jobs for a year or two, but only create about 300 permanent jobs.

The reason that a lot of environmentalists are concerned about it is the way that you get the oil out in Canada is an extraordinarily dirty way of extracting oil, and obviously there are all these risks in piping a lot of oil though Nebraska farmland and other parts of the country.

What we’ve done is I vetoed it because the Congress was trying to short-circuit a traditional process that we go through. I haven’t made a final determination on it. But what I’ve said is that we’re not going to authorize a pipeline that benefits largely a foreign company if it can’t be shown that it is safe and if it can’t be shown that overall it would not contribute to climate change.

Now, a lot of young people here — you may not be worried about climate change, although it is very cold down here. You can’t attribute a couple of days of cold weather or a couple of days of hot weather to the climate changing, but the pattern overall is that the planet is getting warmer. That’s undeniable. And it’s getting warmer at a faster rate than even the scientists expect.

And you might think, well, you know, getting warmer, that’s not a real big deal — folks in South Carolina, we’re used to dealing with hot weather, we can manage.

But understand that when you start having overall global temperatures going up — even if it means more snow in some places or more rain in some places, it’s not going to be hotter in every single place — but the overall temperature is going up, that starts changing weather patterns across the globe. It starts raising ocean levels. It starts creating more drought and wildfires in some places. It means that there are entire countries that may suddenly no longer be able to grow crops, which means people go hungry, which then creates conflict. It means diseases that used to be just in tropical places start creeping up, and suddenly we’ve got a whole new set of, say, insect-borne diseases like malaria that we thought we’d gotten rid of, now they’re suddenly in places like the United States. We start running out of water. It puts stresses and strains on our infrastructure. Hurricanes become more powerful when the water is warmer, which means a lot of our coastal cities and towns are put at risk.

But what you have to appreciate, young people, is this will affect you more than old people like me. I’ll be gone when the worst of this hits. And the disruptions — economic, social, security disruptions that it can cause — can make your life and the lives of your children much harder and much worse. And if you don’t stop it at a certain point, you can’t stop it at all and it could be catastrophic.

I just want you to understand — what I just described, it’s not science fiction, it’s not speculation. This is what the science tells us, so we’ve got to worry about it, which is part of the reason we’ve invested in things like green energy, trying to increase fuel efficiency standards on cars, trying to make sure that we use more solar and wind power, trying to find new energy sources that burn clean instead of dirty. And everybody here needs to be supportive and thinking about that because you’re the ones who are going to have to live with it.

And I’m very proud of the fact that we doubled the amount of clean energy produced since I became president. We’re increasing fuel-efficiency standards on cars, which will save you, by the way, money at the pump. Don’t think that just because gas prices are low now — that’s nice, that puts some more money in your pocket, but that’s not going to last. So don’t start going out and saying, oh, I’m going to buy a big gas guzzler now. Right? Because the trajectory of the future is that gas, oil is going to get more expensive, it’s going to get harder to extract.

We’re going to have to transition over time to a new economy. And there’s huge opportunity. We can create a lot of jobs in those areas if we are focused on it and planning for it.