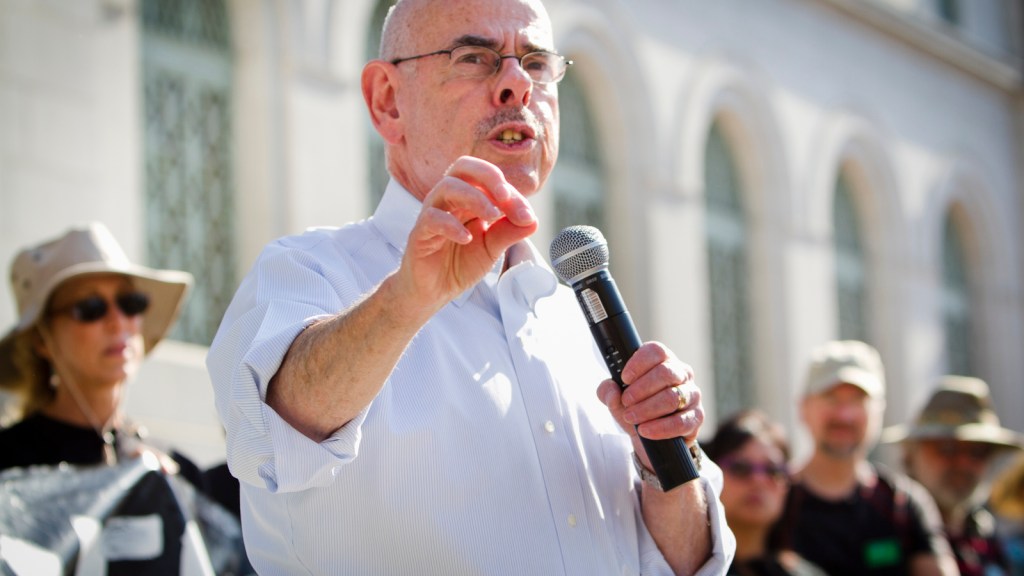 To young environmentalists, Rep. Henry Waxman’s (D-Calif.) name is virtually synonymous with climate action. In the heady days of November 2008, after President Obama’s landslide victory, it seemed as if a cap-and-trade bill might actually pass Congress. Democrats controlled the House, Senate, and White House. There was only one problem: House Energy and Commerce Chairman John Dingell (D-Mich.), who represented the automakers and was subservient to what he perceived as their interests. Like a mustachioed white knight from a fairy tale, Waxman rode in and rescued Mother Earth from the clutch of Dingell’s gnarled, choking fingers.

Waxman ran for and won the House Energy Chairmanship. Short, bald, bespectacled, and not an especially charismatic speaker, he may not have looked like a knight in shining armor. But Waxman was a master of legislative strategy. He went on to coauthor with then-Rep. Ed Markey (D-Mass.) the cap-and-trade bill that passed the House only to die in the Senate.

Last year, Markey moved up to the Senate in a special election to replace John Kerry. Meanwhile, Waxman joined the ranks of liberal lions retiring from the House (such as George Miller [D-Calif.] and Jim Moran [D-Va.]) when he announced on Thursday that he will not seek re-election this fall. The encomiums from environmental organizations poured out immediately. “There has been no greater champion for protecting the environment and public health than Henry Waxman,” said the League of Conservation Voters’ president, Gene Karpinski, in a statement. Sierra Club Director Michael Brune said, “His example should be followed by generations of lawmakers to come.”

Being in the minority in the House of Representatives is no fun. Unlike the Senate, there is no filibuster empowering the minority to block legislation or talk so long they need an adult diaper to avoid bathroom breaks. If Democrats were in the majority, Markey might have preferred being a senior congress rep to a junior senator. Waxman is 74, hardly a young age to retire. But he readily admits that fighting far-right Republicans and being unable to legislate in the current environment has taken its toll on him and reduced the rewards of staying in Congress. “It’s been frustrating because of the extremism of Tea Party Republicans,” he told The New York Times. “Nothing seems to be happening.”

Waxman always had a keen understanding of power, even to a fault. The Huffington Post complained Thursday that Waxman pioneered the practice of raising campaign funds for colleagues to win their support for a chairmanship.

Throughout his four decades in Congress, Waxman promoted both environmental and public health and safety. It’s unfortunate that the most famous bill with his name on it is one that never actually passed. Waxman helped write and shepherd a number of landmark bills that did, in fact, become law. As the Times notes, “Mr. Waxman will leave behind a legacy of entrenched accomplishments, including the Children’s Health Insurance Program, which extends coverage to millions of low-income children; anti-tobacco, food safety, and food-labeling laws; and the Ryan White Care Act, which allocates billions of dollars in federal money for the treatment of H.I.V. and AIDS.”

Environmental advocates point to one major legislative accomplishment in particular: his role in writing the powerful 1990 amendments to the Clean Air Act. As the Times explains, “He is also credited with laying the foundation for many of the executive actions that Mr. Obama, during his State of the Union address on Tuesday, pledged to pursue. One involves the Clean Air Act, which Mr. Waxman helped write and which gives the Environmental Protection Agency the authority it is now exercising to regulate power plant emissions of greenhouse gases. Mr. Waxman saw to it that the bill would allow the president, on his own, to order improvements in automobile fuel efficiency and other energy saving efforts.”

Since the Republican takeover of the House after the 2010 midterms, Waxman has been reduced from powerful committee chair to ranking member, from legislative deal-maker to advocate and critic. Environmentalists say, though, that he has been essential in that role as well. Every time House Republicans introduce a bill to roll back EPA authority, especially in regulating CO2 emissions, Waxman speaks up. “He has helped call attention to the threats from the extreme Republican leadership,” says Sara Chieffo, legislative director at LCV. Although it ultimately falls to the Democratic Senate to block it, or the White House to issue a veto threat, Waxman helps to raise awareness and stiffen the spine of the opposition. And he does not only voice objections to problematic House bills. If it’s an executive action that would endanger the environment, he’s on it. “He has been an outspoken opponent of the Keystone XL tar-sands pipeline, which we really appreciate,” says Chieffo.

Meanwhile, at the beginning of 2013, Waxman organized the House Safe Climate Caucus. Its 35 members take turns going to the House floor every single day that the chamber is in session to speak up on the threat posed by climate change, the need for action, and the damage wrought by climate change-deniers.

Dingell will be next in line to replace Waxman as Democratic ranking member on the Energy Committee. At 87, it is unclear how long he would hold that position. Looking at the Democrats who follow after him on the Committee, such as Rep. Frank Pallone (D-N.J.), one sees plenty with strong environmental records. But it would take years of leadership for anyone to replace Waxman as the House’s leading environmentalist. Says Chieffo, “We’re really going to miss him.”