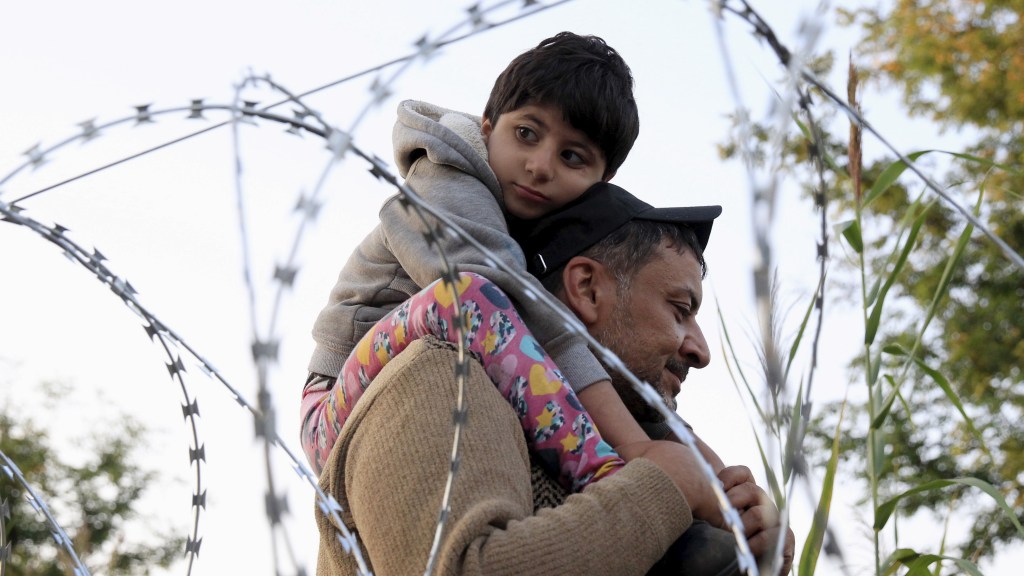 Like a lot of you, I’ve been reading about the wave of refugees traveling from Syria, Jordan, Iraq, and Afghanistan heading northwest with the goal of getting asylum either in Germany or someplace like it. The trip takes about 39 hours by car or 706 hours on foot, though the Google map that I pulled up as a hypothetical route comes with a telling stipulation: “This route may cross country borders.”

Most countries along the route have kept the refugees moving. But Hungary has made an unusual move for a country that, 26 years ago, opened its borders and precipitated the fall of the Berlin Wall. It is building a wall along the 109 miles of border that it shares with Serbia to block any new waves of refugees. Writes The New York Times:

Experienced analysts say the fence will not stop the migrants, who travel in clumps of just a few to clans of dozens, often guided by Google Maps and Facebook groups on the smartphones that are vital to this modern migration.

“It’s just one more obstacle,” said one volunteer, Tibor Varga, who has been working with migrants in northern Serbia for four years. “They will find out how to get around, above, under it.”

Which reminds me of another country: the United States. It may seem to us now that the collection of walls between the U.S. and Mexico has been there forever, but it’s important to remember that they are in fact less than a decade old, and that many Americans fought hard against them, particularly on environmental grounds, before Congress gave Homeland Security permission, in 2008, to ignore federal and state laws — environmental and otherwise — while erecting new barriers.

From where I live, in San Francisco, the fences — along with other restrictions on the U.S.-Mexico border — have had unintended consequences. People began to make riskier border crossings in areas like the Sonoran Desert, with occasionally fatal consequences. Undocumented parents who might have traveled across the border several times in a year became too scared to leave the United States, for fear they wouldn’t be able to make it back in.

On the other side of the border, children were raised by relatives and grandparents, and, when their parents had saved enough money to send for them, were sent to cross the border — sometimes alone — to find parents that they barely remembered. A San Francisco elementary school teacher who worked with immigrant students told me once during an interview that he had eliminated every mention of grandparents from the kids’ coursework, because the mere mention of them could set off a chain reaction that would leave the entire classroom in tears.

You could say that this, while sad, wasn’t the United States’ responsibility, except that it was: Many of the countries that these kids and their families were coming from had been agricultural colonies. Even today, most of the land was controlled by a small group of families who counted on the United States for military and political backup when their control was threatened.

According to the U.N., this planet has 60 million refugees — a “nation of the displaced” looking for shelter. That’s a lot — more than the roughly 50 million who were displaced by World War II. But that’s just from war. The first climate refugees are only beginning to be recognized.

What’s clear to me, reading the news from Europe, is that, when it comes to this business of walls and refugees, the U.S. is a lot more like Hungary than most of us realize. What’s also clear is that, even if we get this war thing figured out, we’re going to need to set up a better system internationally for taking care of refugees instead of blocking their path. Based on how the climate is going, we’re going to see a lot more of them.