What if Al Gore ran for president, again? 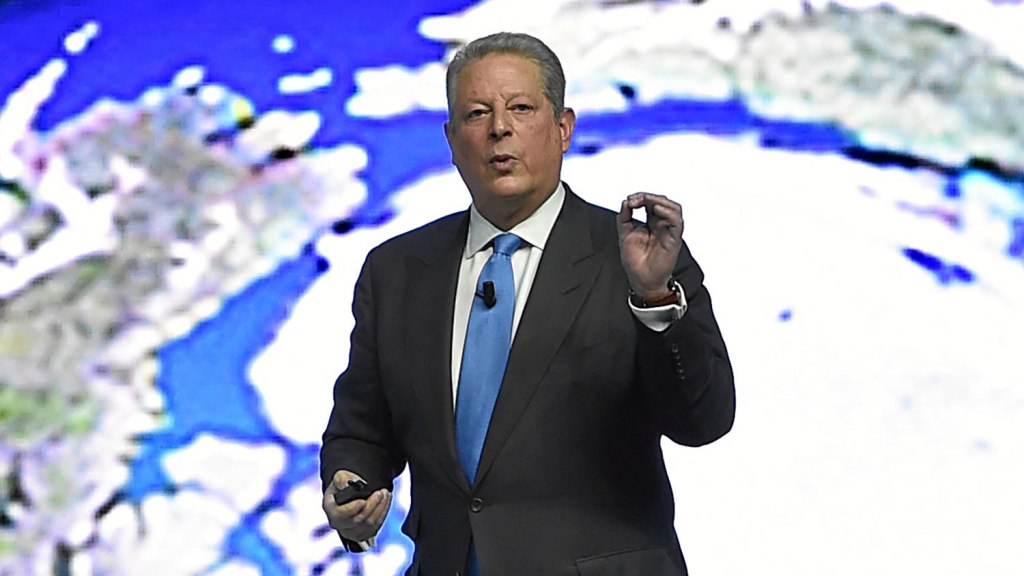 What if Al Gore ran for president, again?

Al Gore’s an important guy to the climate movement. Back in 2006, he helped focus America’s attention (briefly) on the threat of climate change, and he’s been fighting the good fight ever since without attracting the same amount of attention (or ire). Until, maybe, now. The media is paying attention again — and some are even suggesting he run in the Democratic primary against Clinton in 2016.

Ezra Klein argues that a Gore candidacy would put climate change at the top of the agenda, where it should be. While income inequality, which many Democrats are currently focused on, is a “serious problem,” Klein writes, “climate change is an existential threat.” Also, a president can do more on his or her own to fight climate change than to fight inequality.

When it comes to climate change, there’s no one in the Democratic Party — or any other political party — with Gore’s combination of credibility and commitment. Bill McKibben, founder of the climate action group 350.org, calls Gore’s work on the issue “the most successful second act of any political life in U.S. history.” Perhaps that’s hyperbole, but it speaks to the regard in which Gore is held by climate activists. Though he’s been out of office for 15 years, he’s never left the climate fight. Gore has proven himself the opposite of those politicians who love the game more than they care about the issues.

Moreover, in an era in which very little moves through Congress, climate change is an issue where the president has real unilateral authority. The Environmental Protection Agency has the power to aggressively regulate greenhouse gas emissions — a process the Obama administration has begun, but that the next president will need to continue. Much of the crucial work on climate change requires coming to agreements with India and China — and that, too, is an arena where the president can act even if Congress is paralyzed.

Klein notes that running on climate change alone probably wouldn’t work. Unfortunately, Americans just don’t care that much about an issue they think of as a future threat (though by the end of the next president’s term, the American public might come to see that the threat has moved firmly into the present). But Klein points out that Gore, historically, has been more in line with the Democratic base than Clinton on other issues as well. “He opposed the Iraq War and endorsed single-payer health care, for instance. His Reinventing Government initiatives, mixed with his Silicon Valley contacts and experience, look pretty good for a post-Healthcare.gov era.”

So, according to Klein, a Gore presidency should sound pretty good to climate hawks. But some argue that Gore’s high-profile involvement with the climate movement keeps climate change a partisan issue, hurting the movement. From a New York Times profile on Gore this week:

Anthony Leiserowitz, the director of the Yale Project on Climate Change Communication, says Mr. Gore has become a symbol of climate change, which is both good and bad. He energized Democrats on climate issues, but alienated many conservatives, with the eager help of groups like the Heartland Institute and its allies like [Sen. James] Inhofe, who demonize Mr. Gore as part of their campaign to undercut the scientific consensus on the human role in global warming.

“Al Gore cannot ever reinvent himself from the fact that he became one of the country’s most polarizing political leaders,” Dr. Leiserowitz says. “Even as he is trying to explain climate change, he is reminding people, amplifying the conservative response around him.”

Maybe Gore did contribute to making climate change a partisan issue way back in 2006. But unfortunately, that ship has sailed. No matter what action Obama, Clinton, or any other Democrat might propose to take on climate change, conservative politicians won’t be on board. The Republican Party has moved further and further to the right, and become more and more unwilling to work with Democrats on solutions to anything. Gore’s degree of visibility — whether he decides to run for president repeatedly or become a hermit in Mongolia for the rest of his days — won’t change that.

Another problem with a Gore candidacy could be the money he’s made while championing climate science, and the supposed hypocrisy involved in the lifestyle he’s lived with that money. As Luke Brinker writes at Salon, deniers tend to see Gore’s wealth as tantamount to proof that climate change is a hoax — a hoax intended to enrich Al Gore and those sniggering scientists at the IPCC:

You may remember that during the rollout of his documentary An Inconvenient Truth, and for years thereafter, climate skeptics have proven all too keen to pounce on Gore’s hypocrisies — his sky-high utility bills, his fondness for private air travel, and so on — as if his own bad habits somehow debunked climate science; Sen. Mark Kirk (R-IL) even cited Gore’s marital troubles in explaining his about-face on the issue. It’s all patently ridiculous, but even the patently ridiculous helps shape our political discourse. So those of us who acknowledge climate change as an existential threat must also own up to the fact that the anti-science crowd relishes the idea of Gore as their foil. Laudable as Gore’s climate work has been, his political reemergence would risk debasing the climate debate at least as much as it would offer hope for moving that debate forward.

This whole debate is moot, for now, because Gore hasn’t publicly expressed any interest in running another campaign. But it does seem that, by merely continuing to exist and talk about climate, Gore has prompted at least a small discussion about how global warming will figure into the 2016 campaign. And that can’t hurt.