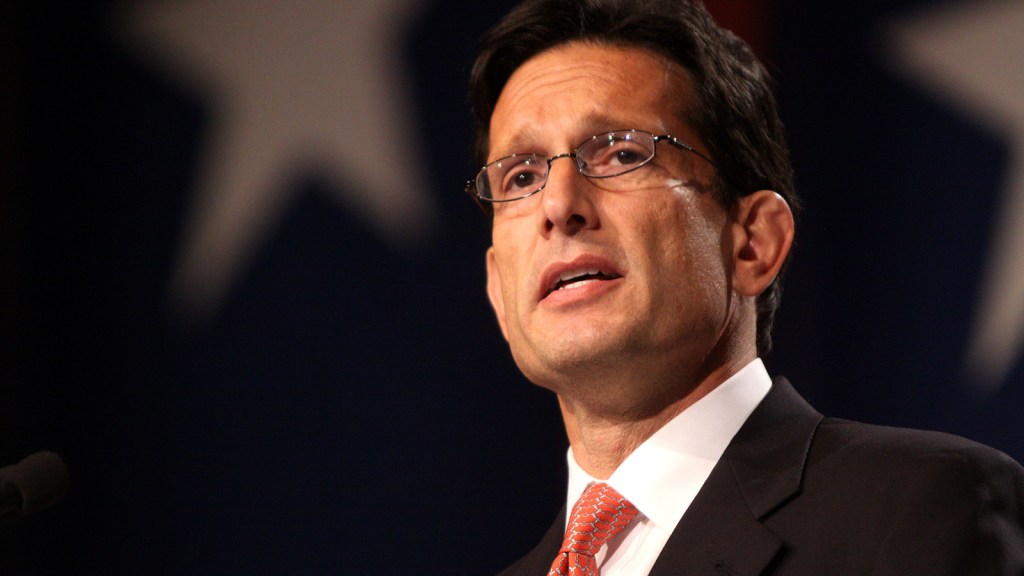 On Tuesday night, House Majority Leader Eric Cantor (R-Va.) was ousted with a decisive loss, 56 percent to 44 percent, in his party’s primary. The victor, college professor David Brat, challenged Cantor from the right, attacking him for raising the debt ceiling, agreeing to a budget that didn’t defund Obamacare, and pushing for bipartisan immigration reform.

But this is no ordinary Tea Party insurgency. Brat was a low-profile and disorganized candidate, who failed to rally support from national right-wing advocacy organizations and fundraising networks. According to the latest campaign filings, Brat’s whole campaign spent $123,000 — less than the $168,000 Cantor’s campaign spent just at steakhouses. Nor was Cantor a tired old incumbent like Sen. Thad Cochran (R-Miss.), who was forced into a runoff by a Tea Party challenger in last week’s primary. Cantor, 51, raised over $5 million and blasted Brat with a heavy ad campaign.

Most importantly, Cantor was no moderate. He positioned himself as the hard-right leader of the rabble-rousing freshman caucus elected in 2010. That’s why Democrats and establishment Republicans like House Speaker John Boehner (R-Ohio) are chuckling that Cantor got what he deserved: He encouraged the Republican base’s unreasonable demands for bigger spending cuts and tax cuts than President Obama would ever agree to, and now he himself has fallen victim to their rejection of political reality. “What makes tonight’s upset defeat delightfully ironic is that Cantor, who has spent the last three and a half years whipping up right-wing dissatisfaction against Boehner’s alleged moderation, is himself the victim of accusations of collaboration,” writes Jonathan Lawrence, former chief of staff to House Minority Leader Nancy Pelosi (D-Calif.). “Tonight, I imagine, the atmosphere in the Speaker’s Office is unadulterated glee.”

But both Democrats and deal-making Republicans should temper their glee. Cantor’s defeat is a terrible omen for any sort of policy progress or competent governance. Consider the four takeaways from last night’s results from ABC’s Rick Klein: “Immigration reform is dead,” “The Tea Party is alive and well,” “Nobody is safe,” and “The race for Speaker is on — to the right.”

This is bad news for every liberal priority, but especially environmental issues, and most especially climate change. The Tea Party movement, and its pressure groups like the Koch-funded Americans for Prosperity, harbor a special animus for environmental regulation.

House Republicans already voted against environmental interests 95 percent of the time in 2013, according to the League of Conservation Voters, so you might wonder how much worse it can get. A lot, actually. Republicans will push their already extreme demands even further, in an effort to get the Senate and White House to move further in their direction when negotiating. Just consider the last budget, the one that conservatives were mad at Cantor for passing. It cut EPA funding $2.1 billion from 2010, when Republicans took over the House, prohibited the enforcement of efficient lightbulb regulations, and blocked White House efforts to stop funding for coal-burning power plants in other countries. If that’s too moderate for Republican primary voters to accept, what would Congress have to pass to keep them happy?

A look at some of the bills the House Republicans passed in 2013 gives us some idea. According a report from Rep. Henry Waxman’s (D-Calif.) office, the House voted 20 times to block or hinder federal efforts to curb carbon pollution and twice to block federal efforts to cut emissions of methane. With the EPA’s proposed regulations on carbon emissions from power plants now in motion, and the fight over them likely to be the biggest since Obamacare, stripping EPA of authority to regulate greenhouse gases could become the right’s new incessant demand. As with defunding Obamacare, Tea Party activists might say any Republican who votes for a budget that doesn’t include this measure is a sellout.

Democrats will, of course, have to play defense, just like on Obamacare. As long as Obama stays firm and promises to veto any budget that removes his biggest weapon in fighting climate change, it won’t come to pass — at least until 2017 when we might have a Republican president. But he might be inclined to give in to some of the Republicans’ less extreme demands just to avert a government shutdown. Any concessions Republicans can get will have serious consequences. Regulating methane leaks from fracking and pipelines in the booming natural gas sector is essential to meeting our climate change mitigation goals, so letting Congress block EPA action on this would be devastating. And even just agreeing to further cuts to the EPA’s enforcement budget would damage the quality of our air and water.

And what about actually making progress on combating climate change? Obviously passing a freestanding cap-and-trade or carbon-tax bill through the Republican-led House was already a nonstarter. But there was one glimmer of hope some held out: that a big, bipartisan tax reform package could include a carbon tax. It was always a bit of a pipe dream, but it made a certain sense: Republicans hate income taxes, which they say punish work, and they often argue for consumption taxes instead.

Bipartisan tax reform was unlikely to happen, but it just became that much harder. The lesson of Cantor’s loss is that House Republicans will be punished by their base for making any deal with Democrats, even though Democrats control the White House and Senate.

Immigration reform has a lot of similarities to climate change legislation. It almost passed the Senate a few years ago, only to trigger a right-wing backlash, followed by the bill’s leading Republican advocate coming out against his own bill. (For cap-and-trade, that was Sen. Lindsey Graham; for immigration, it was Sen. John McCain.) It is supported by a large majority of the American public, and reformist Republicans tend to think that getting on the right side of history would help them win back some of the Latinos, young people, and educated voters who have been abandoning the party in droves. Immigration reform stands a better chance of winning Republican support because, unlike carbon pricing, the big-business wing of the GOP supports it. And yet it cannot pass because of the Republican primary electorate’s implacable opposition.

This is what happens when you have gerrymandered districts and low voter turnout: Only the most extreme Republicans set the agenda for their whole party, and they can subject the whole country to their whims.