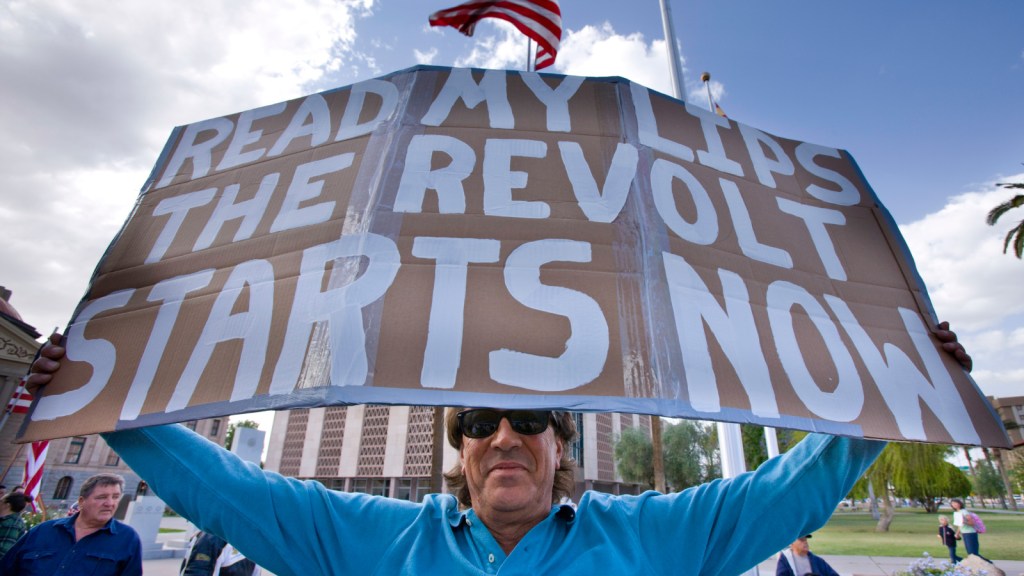 Conservatives and business interests were attacking the EPA’s Clean Energy Plan to reduce power-plant CO2 emissions before it had even been released.

Now that the actual proposal is out, the right is ready to go after it from every possible angle. They will sue to stop it, but courts generally won’t hear challenges to regulations until after they’ve been finalized, which won’t happen until June 2015. So for the next year, the battle will be fought in the court of public opinion, with everything from grassroots lobbying to cable TV sound bites to onslaughts of political ads. Conservatives will organize around two main messages: that forcing power plants away from reliably low-cost coal will drive up the price of energy and jeopardize our energy supply, and that higher-cost energy will hamper economic growth.

At first glance, the playing field would seem to be tilted in favor of the proposal’s supporters. A new Washington Post/ABC News poll found that 70 percent of Americans support federal limits on greenhouse gas emissions from existing power plants, including 63 percent of Republicans. That’s similar to previous polls, like one by the Pew Research Center last September that found national support at 65 percent, and one from Yale University in April that found 64 percent support. The Washington Post and Yale surveys suggested that electricity costs for consumers could go up — a premise that some green groups dispute — so the polls can hardly be accused of bias in favor of the rules. Another poll found that the average American would be willing to pay $162 in higher electric bills for cleaner energy. That is higher than even the Chamber of Commerce’s exaggerated estimates of what the rules would cost. (The Natural Resources Defense Council argues that the rules would actually save the average household $103 per year on electric bills, because the rules encourage investments in energy efficiency that would help Americans use less energy.)

But before you assume the winner of this fight is a foregone conclusion, consider two important caveats. First, the average cost increase or decrease to an American household masks wide variations in the effect on different consumers. If you live in one of the states that gets most of its electricity from coal, your electric bills could go up a lot more than they will elsewhere. Second, there’s a big difference between supporters and opponents of environmental regulations. Cleaner air, or less global warming, benefits everyone. But it benefits most people only marginally, and invisibly. So, as with many other types of industry regulation, support may be a mile wide and an inch deep. The costs, unlike the benefits, are heavily concentrated. Someone who works for a coal company, or a related industry, or in a community with a large coal presence, may see a direct threat to her livelihood and be much more motivated to call her congress member or show up at a town hall to express her intense opposition.

That’s why the coal industry will focus its efforts in the states that are most dependent on coal for their electricity, or that have it in the ground. “We’ve been seeking to educate and inform consumers through some of our grassroots activities in key coal and coal-consuming states,” says Nancy Gravatt, communications director for the National Mining Association, a trade organization for mining companies. There are 19 states across the Midwest, Appalachia, and the Rocky Mountains that get more than half of their electricity from coal. That’s where NMA will focus. And in Upper Midwestern states like Ohio, Minnesota, and Illinois, the group will argue that an increase in electricity costs would damage the manufacturing economy.

Ironically, NMA cites the coal industry’s enormous market share one moment, and the next complains that it doesn’t have the money to compete with those notoriously well-heeled environmentalists. “We won’t be doing paid media on TV because that tends to jump in cost,” Gravatt says, but will instead focus on “earned media, interviews, some modest paid media on radio and digital” in “regional markets.”

“The Big Green lobby is very well-funded in comparison, when you have people like Michael Bloomberg and Tom Steyer,” she says. You’d think the poor little coal companies were up against Google and Goldman Sachs, not a handful of nonprofits. Neither Bloomberg nor Steyer have announced any intention of spending on this particular battle. Steyer issued a comment praising the EPA’s proposal, but a spokesperson for his organization NextGen Climate declined to comment on whether the group has any plans to advocate for the Clean Power Plan, presumably because it currently has none. In contrast, the Koch brothers-funded group Americans for Prosperity will definitely be engaging in this fight (more on that below).

EPA’s proposal, by setting modest targets for lower CO2 emissions from power plants, would likely accelerate the shift from coal to natural gas that we’ve already been experiencing. Gravatt says such a switch would endanger the energy supply. Americans, she argues, have taken for granted the affordable, reliable electricity provided by coal. Natural gas is bought on shorter-term contracts than coal, and so its price fluctuates more. And natural gas is also used for heating, so she warns that a cold winter could destabilize the energy supply, leading to price spikes or blackouts.

Opponents of the EPA proposal also claim that more expensive energy and the death of coal will mean hundreds of thousands of job losses and billions of dollars in lost economic growth. (They ignore, of course, all the jobs being created in the clean energy and energy-efficiency sectors.)

NMA’s hope is that outraged citizens will call their congressmen, senators, and local representatives, so that Congress and state governments will demand weaker rules that allow coal plants to burn up the planet, as long as they use the “best available technology.”

Our bizarre federal system, in which a determined minority can often stymie the will of the majority, works very much in conservatives’ favor on this issue. Wyoming, the nation’s least populous state, gets 85 percent of its energy from coal and has the same number of senators as California, the nation’s most populous state, which gets less than 1 percent of its power from coal. Since compliance with the EPA’s final rule will ultimately be enacted at the state level, opponents can buttonhole state government officials and encourage them not to cooperate. In Wyoming they would be pushing on an open door. The state recently passed a budget preventing adoption of the newest national science standards in their schools because they include climate change.

The legislative battle has already begun in several coal states, such as Kentucky and West Virginia, which passed laws before the rules were even proposed, directing their state agencies to develop plans that will reduce CO2 emissions less if they find an economic impact from complying with EPA regulations.

The EPA tried to ensure state cooperation by making the rules so soft and pliant that energy utilities could live with them. News stories suggest utilities around the country are supportive or at least keeping an open mind. But the conservative movement, unlike the Republican Party of yore, is not just a bunch pragmatic businessmen who are willing to cut deals. They are ideologically opposed to regulation and determined to deny Democrats even modest policy achievements. That’s why Senate Republicans recently voted down a bill to reduce government spending and help businesses save money voluntarily through energy efficiency. Likewise, House Republicans voted to repeal EPA authority to regulate greenhouse gases before they had even seen the proposal. As soon as it came out on Monday, leading Republicans started lambasting the plan, like Senate Minority Leader Mitch McConnell of Kentucky, who called it, “A dagger in the heart of the American middle class.”

“An incredibly modest rule to win over the utilities will be effective, but the narrative isn’t being written by the utilities,” says Tyson Slocum, director of Public Citizen’s energy program. “It’s outside political organizations.”

A good example is Americans for Prosperity, which is aligned with the Tea Party movement and is active in state and local elections. AFP’s approach to opposing the emissions rules will be to target vulnerable Senate Democrats in coal-heavy states.

“We’ll be leveraging the voices of our members, asking them to call their representatives, call their senators, and tell them they don’t like what they’re seeing,” says Levi Russell, AFP’s director of public affairs. AFP has 2.3 million members nationally. “Mark Udall will hear from his constituents in Colorado about the impact of these regulations he supports on Colorado,” says Russell. “He’s facing a tough reelection.” Other likely targets who are up for reelection, and who AFP has previously gone after for being insufficiently supportive of fossil fuels, include Sens. Mary Landrieu of Louisiana and Mark Begich of Alaska.

Slocum predicts that conservative groups will “cook up a bunch of doom-and-gloom price-hike figures.” Russell, for example, approvingly cites the Chamber’s study that was debunked for having made vastly outsized assumptions about America’s future energy consumption and the ambition of the targets EPA would set. Given the Chamber’s wealth, and the enormous resources it has deployed on behalf of Republicans in recent elections, it is the group environmentalists fear most.

“The Chamber of Commerce is planning a large media buy in six to eight states to go up right after the [proposal’s] announcement,” says Melinda Pierce, legislative director at the Sierra Club. “It’s rumored to be a $10 million buy, under the moniker ‘Summer of Pain.’” The Chamber did not respond to requests for comment from Grist.

The Obama administration bent over backwards — some say too far — to make these rules as acceptable as possible to conservatives and the energy industry. They designed a very flexible plan that will allow states to find any number of alternatives to just shutting down coal plants. They do not impose a hard cap on total CO2 emissions, only the emissions per megawatt hour of electricity generated, so as to avoid handicapping economic growth. The projected emissions reductions, while significant by America’s historical standards, are much smaller than what the McCain-Palin ticket campaigned on in 2008.

But it has been clear since Senate Republicans defeated the Kerry-Lieberman cap-and-trade bill in 2010 that working together to avoid climate catastrophe is of no interest to the Republicans, at least while President Obama is in office.