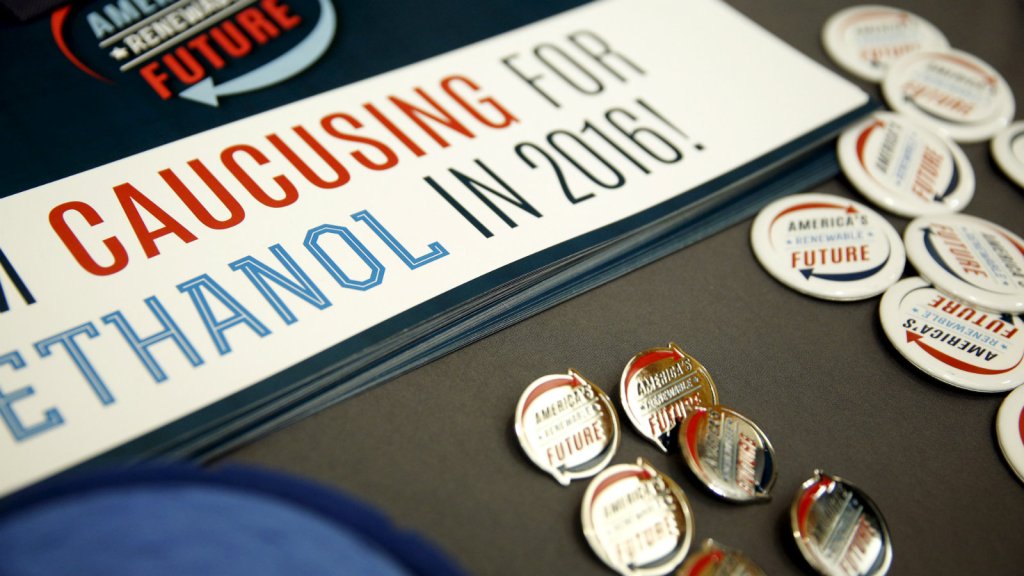 Iowa farmer David Ausberger had thought he was close to making up his mind about who he’d support in his state’s presidential caucus. “Both my wife and I were leaning toward Ted,” he told me. “Now I guess maybe we gotta go back to the drawing board.”

That’s because Iowa’s governor had recently said that he wanted Ted Cruz to lose. And so did the groups that campaign for renewable biofuels. That’s a problem for Ausberger. He’s a big, easy-going guy — a former college mascot who cares a lot about conservation techniques in farming but doesn’t get too heated up about presidential elections. Cruz looks to him like a defiant outsider who could clean house in Washington and upend political business as usual. But Ausberger also sells a lot of corn to ethanol plants.

Many Iowans are mulling the same problem. A fortnight before the caucuses, Ted Cruz seemed to be leading the crowded Republican field in Iowa, and heading into the caucuses he is neck-and-neck with national favorite Donald Trump. That’s surprising because Cruz has championed the slaying of one of Iowa’s sacred cows: the Renewable Fuel Standard, which Congress passed in 2005. The RFS required renewable fuels to replace a percentage of fossil fuels used for cars, airplanes, and heating. That amount has increased over time and currently stands at just over 10 percent. The RFS is a government mandate that creates a market for biofuels, and therefore creates a market for corn, and therefore helps Midwestern farmers. For a while, it seemed like supporting ethanol and the RFS was a prerequisite for topping the Iowa heap — but that’s changing.

When I called up Monte Shaw, executive director of the Iowa Renewable Fuels Association, he assured me that ethanol still had plenty of clout.

“There will certainly be people who crow, and tell us we should learn the incorrect lesson from that,” he finished my sentence. The correct lesson, Shaw said, is that when you split the Republican vote 12 ways, you create an opportunity for dark-horse candidates. “Iowans will overwhelmingly vote for pro-RFS candidates,” he said. “That’s a fact.”

He’s almost certainly correct. All the Democrats and 10 out of 12 Republicans support a strong renewable fuels standard.

“I have a hard time imagining someone winning in the Iowa general election who was against the RFS,” he continued. “And Iowa is one of seven swing states.”

OK, I said, back that up. Why do Iowans care about ethanol?

“Our economy runs on agriculture,” Shaw said. “Even if you are sitting on your butt in Des Moines working in insurance, you are affected by ag.” Even modest slow-downs in the ethanol mandate have hurt, he added, and shutting down the program entirely would devastate the economy.

The price of corn has indeed plummeted from the early days of the biofuel boom. But I asked, “Do you really think that’s all because of the slowdown in the amount of ethanol the RFS requires us to consume?”

“There are always multiple factors, but most observers would say the pause in the RFS was the largest,” he said.

Well, that depends who you talk to.

The ethanol boom is over

Agricultural economist Brian Wright finds it a bit amusing that biofuel boosters are now insisting that grain prices are tied closely to the ethanol program. “When I was writing this [a paper demonstrating that the RFS had caused a spike in world grain prices], farmers were saying that biofuels had nothing to do with the price increase. When the politicians want to change the policy, they say you are ruining us by dragging down the price of grain,” he said.

Another economist, David Swenson at Iowa State University, told me that when ethanol plants started buying up increasing amounts of corn in 2006, it really did drive up prices. It was a brand new market, and there was more demand for corn than farmers could supply. But Swenson said, “The industry has simply matured. There was this phenomenal structural shift, and for a while farmers weren’t growing enough corn, but now there’s a glut.” And because of that, the importance of ethanol has waned. Swenson calculates the effect of the industry very differently than Shaw. “If all the ethanol plants closed, how much would Iowa’s economy contract? The answer to that question is less than 8,000 jobs.” Even that unlikely scenario doesn’t amount to much in an economy of 1.7 million workers.

Of course, people like Ausberger who are directly connected to the ethanol industry would feel any shift in government policy most directly. “I can see the plumes of an ethanol plant six miles away from my office here,” he said. And it was transformative to have an industry that wanted to buy his corn rise up next door, he said. Before, pretty much all his corn went to feed animals.

The ethanol industry was a new buyer around for Ausberger’s corn. That gave him more pricing power, and more money to invest in better tools and to experiment with techniques. One change led to a cascade of opportunities and innovations, he said.

The end result was greater efficiency and higher production — and eventually, the supply of corn overtook the demand. “The cure for high prices,” Ausberger said, “is high prices.”

Other issues rise in importance relative to ethanol

It would be hard for Iowa farmers to vote for an anti-ethanol candidate at a time when the biofuels industry had tripled the price of corn. Now that prices have fallen, ethanol may not be important as other issues. That’s the sense that Scientific American editor David Biello got while reporting in Iowa last week. He was working on documentary called The Ethanol Effect with Detroit Public Television for PBS. I caught him in the airport as he was heading home.

Ethanol just wasn’t at the top of the mind for the conservatives he’d talked to. What were they worried about? “Immigration and the sense that the country is in some kind of death spiral — and that Obama is responsible for that,” he said.

There are different reasons for various stripes of conservatives to oppose the ethanol mandate. Free marketeers don’t like the government imposing a quota on the market. Those who work with the fossil fuel industry, like the Koch brothers, don’t like the competition from biofuels. That might weigh against ethanol in the Republican caucuses. I asked Biello what he thought of Shaw’s assertion that no anti-ethanol candidate could win the general election in Iowa. “I don’t buy it,” he said.

To be fair, the ethanol lobby has already had some big political successes this year: Bush, Sanders, and other candidates who made noises about ending, or reducing, the ethanol mandate have come around to supporting it after spending time in Iowa. But these gains took extraordinary effort, Biello said. “The ethanol folks are making the largest push they have ever made to show their power,” he said.

And then, significantly, there’s Rep. Steve King. He’s an ethanol stalwart who represents the northwest corner of Iowa — ethanol central — but he’s campaigning for Cruz. “If the person from the most pro-ethanol district in all of Iowa feels politically secure enough to support Cruz — who the ethanol industry hates — it means something has shifted,” Biello said.

Part of that shift, as I’ve already suggested, comes from the fact that ethanol is no longer jacking up the price of corn. Another part may come from the declining price of oil. Once, energy independence — the idea that we shouldn’t be beholden to the Middle East for energy — provided an important argument for ethanol. But now the U.S. produces more oil than it can use. “There’s nothing like $1.70 gas to make you change your mind about energy security,” Swenson said.

A couple months ago I did some reporting to compare the relative greenhouse gas emissions from corn ethanol and from oil. On that pass it seemed pretty cut and dry: Ethanol appeared worse. Now I’m not sure.

After that piece, sources got in touch to let me know that the publicly funded Argonne National Lab had come to different conclusions. When I talked to Jennifer Dunn, a researcher there, she patiently walked me through the factors that they considered. They had included everything I had thought they might be ignoring, including indirect land-use change. They also keep updating the model as new information comes in. At this point, their model shows that replacing oil with corn ethanol leads to a 37 percent reduction in greenhouse gas emissions.

Other scientists (like the ones I’d read initially) have come to different conclusions. A lot depends on economic models that estimate if and where new land is cleared for agriculture. There’s a huge range of uncertainty about indirect land use change.

I haven’t been able to figure this out definitively (though I intend to keep working on it). The usual cop-out is to say that corn ethanol is complicated and troubled, but cellulosic ethanol is coming and will make everything better (because we could turn perennial grasses and corn cobs into fuel). But cellulosic ethanol has been a huge disappointment: There are a couple of small plants making the stuff, but no one has been able to produce it at scale.

Ausberger isn’t sure if the ethanol issue will sway him against Cruz. He apologized for his vagueness: He’s not particularly fixated on politics, he said, and offered to put me in touch with some farmers who were. I told him I was happy to talk to a normal person rather than someone who would rant at me. He laughed. “I know, some of the things I’ve been reading on Facebook recently, like wow, some of my friends are crazy!”

At this point, Ausberger just wants it to be over — he’s sick of the campaigning and the spin. But it’s Iowans like him — people who caucus, but haven’t made up their mind; people who know they will be affected by changes in biofuel policy, but may care about other policies even more — who will determine the state’s Republican nominee. That vote will provide a signal. Ethanol’s economic clout has already waned; on Feb. 1, we’ll see if its political clout is fading as well.