After years of watching climate change fail to emerge as a central issue in U.S. presidential elections, environmental activists are warily eyeing a coded message from Hillary Clinton’s campaign chair that this might finally become the cycle when the future of the planet gets top billing.

The advocates are not just wondering about voters and their priorities, which a new wave of billionaire backers insist are at a “crossroads.” They are worried about the candidate herself.

Interviews with environmentalists, pollsters, donors, and Democratic strategists reveal a deep vein of doubt over Clinton’s political will in committing to the environment, mixed with an eagerness to hear much, much more about specific policies. At the very least, they are waiting to hear her say the words “climate change” on the campaign trail, which alone might be an advantage over Republicans who would reject science in the White House.

Green activists say they are watching whether Clinton moves beyond talking vaguely about the climate — politically safe terrain for any Democratic candidate — to backing strategies that could make a difference but incur a political price, such as imposing new caps on carbon emissions or opposing the Keystone oil pipeline to run from the Canada tar sands to the Gulf Coast.

Bill McKibben, the environmentalist, author, and founder of 350.org, said that in her decades in public life, Clinton had not established a strong record on climate issues. He cited her failure to lead the U.S. to a deal at the 2009 United Nations Climate Change conference, and other episodes that have left the former secretary of state not at the forefront of the debate so much as playing catch-up.

“She’ll hit the main talking points in a speech, but ‘believing in climate science’ is no longer enough. In 2015, it’s about ‘keeping it in the ground’,” McKibben told the Guardian, referring to recent worldwide efforts pushing companies and organizations to divest from fossil fuels.

“Beyond saying she was initially inclined to approve it, she has never taken a position on the Keystone pipeline,” said McKibben. “She was the world’s top diplomat when the climate talks in Copenhagen fell apart. And she’s awfully cozy with big oil and gas interests. So far, there’s really no reason for people who care about climate to be excited about her.”

“An enormous signal” without any promises

Excitement that climate change will, for the first time, become a central issue in a presidential election was stoked by a much-parsed tweet sent by campaign chair John Podesta on April 12, moments after he first announced Clinton would be running.

Clinton, outlining four early campaign planks herself at the first two events in Iowa, echoed the economic priorities and added a call for campaign finance reform but alluded only to “threats” — foreign or planetary — “that we see and the ones that are on the horizon.”

Asked by the Guardian for clarification and details of the candidate’s plan on environmental issues, Clinton spokesperson Nick Merrill referred to a speech and a chapter in her book from last year in which she calls climate change “a significant national security threat” and describes the Copenhagen deal as “far from perfect” but a step “on the road to future progress.” Aides have said they will begin to lay out more specific policy stances in the weeks ahead — but a full agenda may not arrive until the summer or beyond.

But Jennifer Herrington, a prominent Democratic activist in Iowa who met Clinton behind closed doors after her final public event there, told the Guardian the candidate had signaled that she would approach energy “from an economic standpoint” and that “doom and gloom really isn’t going to sell.”

“She talked about how we need rules and regulation and that has to come from government, and public-private partnership,” Herrington, chair of the Page County Democratic Party, said of her meeting with Clinton and other Iowa leaders on Wednesday.

Brian Deese, Podesta’s successor as senior adviser to Obama on climate, conservation, and energy, laid out similar priorities for the current White House: In a series of environmental announcements this week, he wrote in an email, the president “will be showing how tackling climate change means protecting our local businesses and economies.”

With Podesta at the Clinton campaign’s helm, climate change will be an undeniable presence in the 2016 election, according to Greg Dotson, vice president of energy policy at the Center for American Progress, which Podesta founded.

“The fact that John Podesta’s saying it’s going to be one of the top three issues is an enormous signal at this point in the campaign,” Dotson told the Guardian.

If Clinton has the right adviser in Podesta, questions remain as to whether Podesta has the right candidate in Clinton. The last time she ran for president, Clinton supported a gas-tax holiday, dismissed by most economists, including her own advisers, as gimmicky. As secretary of state, Clinton led an effort on behalf of U.S.-based oil companies to sell fracking around the world.

An announcement by her family’s foundation last week that it would no longer accept donations from some Gulf Arab states obscured the fact that the foundation plans to continue to accept petrodollars from countries such as Norway.

Clinton resigned from the Clinton Foundation when she announced her candidacy. A spokesperson for the foundation, Craig Minassian, said the “more transparent funding and disclosure policy” continued to support the Clinton Climate Initiative and other efforts to combat the effects of global warming and serve communities in need.

Billions in dark money — or “doing right by our kids”

Climate activists welcome, however, strong statements that Clinton has made — in marked contrast with her potential Republican rivals — about the need to fight climate change. So do liberal campaign financiers and lobbyists.

At the National Clean Energy Summit in September of last year, in her first major domestic policy address since stepping down from the state department, Clinton described global warming as “the most consequential, urgent, sweeping collection of challenges we face as a nation and a world.”

“The science of climate change is unforgiving,” Clinton told the League of Conservation Voters three months later. “No matter what the deniers may say, sea levels are rising, ice caps are melting, storms, droughts, and wildfires are wreaking havoc.” 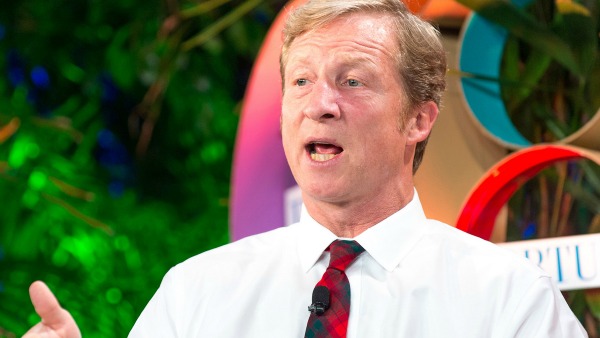 NextGen Climate Action, the political action group founded by billionaire Tom Steyer that spent $74 million in an effort to defeat climate change deniers in the 2014 elections, has vowed to spend untold millions more to make language like that the price of entry in the 2016 campaign.

“This is a crossroads election,” NextGen Climate Action said in a statement, “where we will either move forward with a Democrat, such as Secretary Clinton, who has made clear they are committed to fighting for the next generation when it comes to the challenge of global climate change, or we can go backwards with Republican, science-denying presidential candidates who are more interested in securing the support of the Koch brothers and their billion dollars than in doing right by our kids.”

Sheril Kirshenbaum, executive director of Science Debate, a nonpartisan group that backs the inclusion of science policy in presidential debates, said Clinton could raise the discourse of a national campaign.

“If Hillary Clinton is saying from the start that she is going to be addressing climate change, then hopefully that means every candidate running for president is going to have to be a part of that conversation, regardless of what position they take,” Kirshenbaum told the Guardian.

A voter conundrum “if she gets really specific”

A blooming onion of Republican challengers has already been forced to confront increasing questions about the environment — “the climate is changing,” Jeb Bush said in New Hampshire on April 17, as did Marco Rubio in an interview broadcast on April 19 — but the reality of voters’ attitudes may end up better suited to the well-worn conservative line that politicians are not scientists.

In the first week since she entered the contest, multiple Republican attacks on Clinton referred to her potential presidency as “the third term of Barack Obama.” Podesta is largely credited — and credits himself — with restoring enough confidence in the administration’s “action plan” to push for sweeping environmental regulations on the coal industry, which are currently facing legal challenges.

Clinton, in her December speech, said, “The unprecedented action that President Obama has taken must be protected at all costs”; she also heavily supported the Senate run of Alison Lundergan Grimes, the candidate who called out Obama’s “war on coal.”

Obama, no longer facing an electorate and posing climate change as a national-security and economic issue, is scheduled to directly address global warming as “far beyond a debate” during remarks from the Florida everglades on April 15. Clinton has scheduled campaign events in New Hampshire for Monday and Tuesday.

Liberal pundits may call science-averse candidates like Ted Cruz “prostitutes” to oil money, but climate change has never registered as even a top-10 issue with presidential voters. Republican voters in the primary states of Iowa and South Carolina have labeled the belief that global warming is human-made as their “least acceptable” issue.

Now, pollsters say Clinton is likely to benefit politically from talking generally about climate change, though getting specific could prove problematic.

A majority of U.S. voters, including half of Republicans, said they believed global warming was a threat that the government should counter, in a recent survey conducted by the environmental group Resources for the Future, Stanford University, and the New York Times.

“We’ve found that if [Clinton] were to just say the basics — ‘I believe in climate change, I’m committed to making change, I’m going to work hard, I’m going to act on this issue’ — that attracts a lot of voters,” survey co-author Jon Krosnick, a professor of political science at Stanford University, told the Guardian.

“If she wants to start getting into more specific policy … she has to be careful,” Krosnick said, adding: “I just don’t know if she’s going to attract any more votes if she gets really specific and says ‘cap-and-trade’ or not.”

A poll released this month by the Washington Post and ABC News found a majority of both Americans and independent voters “very” or “extremely” supportive of a president who backs federal action on climate change.

Though Clinton has yet to say the words “climate change” since launching her campaign eight days ago, she — at least for now — remains the best and only hope for voters who want a president willing to confront the issue.

“Let’s hope she either steps up her game, or one of the other contenders becomes a reality,” McKibben said. “Bernie Sanders, for one, has been about the climate’s best friend in the Senate.”

Sanders, the Vermont senator who is weighing a 2016 primary challenge from the far left, has voted for cap-and-trade legislation and recently questioned whether Clinton is “prepared to take on the billionaire class.”

Martin O’Malley, the former Maryland governor who said on April 19 that he was “seriously considering” a 2016 run and who called out Clinton on other progressive causes in response to a question from the Guardian last week, has been labeled no less than “a climate hawk.”

What will it take to restore the Gulf Coast and its people?