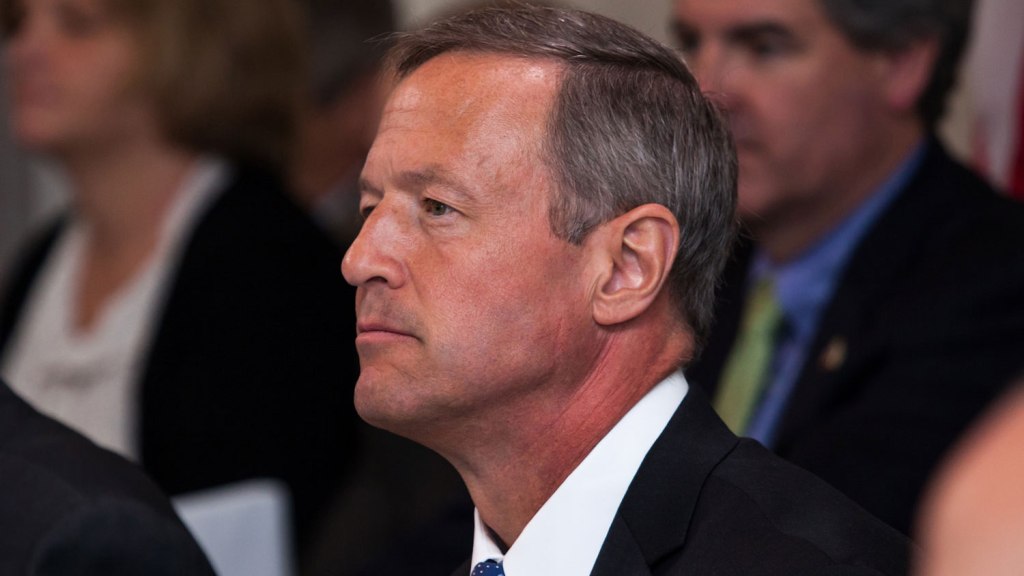 Maryland Gov. Martin O’Malley (D) is nothing like any pop culture stereotype of a politician. He’s not a boyishly charming airhead like George W. Bush or The Simpsons’ Mayor Quimby, or a blunt, lovable grandpa like Joe Biden or The West Wing’s Jed Bartlet. He’s not even that much like the fictional politician based partly on him, The Wire’s Tommy Carcetti, who like O’Malley became the unlikely white mayor of majority-black Baltimore. O’Malley has none of Carcetti’s sleazy slickness. O’Malley comes across more like the sort of engaged administrator you would hire to turn around a moribund government agency.

In January, O’Malley will leave office after eight years because term limits prevented him from running for a third term. He will likely run for president in 2016, despite low name recognition and a lack of classic charisma. But whatever his seeming political deficits, he has won a steady stream of elections, made tangible progress in governing, and earned respect from progressives, including climate hawks.

When he walks in — no jacket, sleeves rolled up to his forearms — to the quarterly ClimateStat meeting at the Maryland State House in late October, where agency heads report on their progress in reducing greenhouse gas emissions, he amps up the dry proceedings with rapid-fire questions and his enthusiasm for the nitty-gritty of policy. “That’s awesome! That’s a good use of GIS [geographic information system],” he exclaims over a map of tree coverage on the projector. (O’Malley likes data visualization; he later observes, “People under 40 communicate in charts and graphs.”)

ClimateStat meetings are run in a mahogany-heavy conference room by StateStat Director Matt Power. O’Malley is fond of organizing progress reports on various initiatives and labeling them with a name that ends in “Stat.” It is a habit he picked up in Baltimore, where he expanded the famous CompStat system for urban crime fighting to a CitiStat approach for measuring progress, holding managers accountable, and correcting oversights across the government.

This is especially important on climate policy, because reaching your emission-reduction goals requires tracking incremental progress across a wide range of areas. In 2009, O’Malley signed into law a state target of reducing total greenhouse gas emissions by 25 percent from 2006 levels by 2020. O’Malley has laid out other goals to help get his state there, such as doubling transit ridership by the end of 2020 and increasing in-state generation from renewables to 20 percent of electricity use by 2020. So Maryland must keep tabs on everything from energy demand and renewable capacity to transit use, waste management, and tree cover.

O’Malley is the rare elected official who seems genuinely motivated to address climate change. “I deal with a lot of politicians in my work as a climate advocate,” says Mike Tidwell, director of the Chesapeake Climate Action Network. “Martin O’Malley, more than any politician I know, really loses sleep over climate change. He is deeply concerned about climate change and his actions over the last eight years reveal that. He’s pushed the envelope more than anyone I’ve seen. He’s the kind of politician where his staff comes in and says, ‘Here’s what we propose to do,’ and most politicians would say, ‘Let’s cut that down a little,’ and Martin O’Malley regularly says, ‘We can’t do better than that? Push a little harder?’”

Maryland, because it’s part of the Regional Greenhouse Gas Initiative (RGGI), requires its electric utilities to buy permits for their carbon pollution. The cost of those permits, according to the state government’s estimate, raises electricity bills by only an average of 0.61 percent. The proceeds, around $80 million this year, go into energy-efficiency programs that can then help lower utility bills for Maryland citizens.

The state is also pushing ahead with lots of other, smaller initiatives to cut greenhouse gas emissions. To reduce methane creation from landfills, for example, it is trying to amp up recycling and composting with the goal of reaching 65 percent waste diversion by 2020. It is planting trees on public land to expand carbon sinks, it follows the highest International Energy Conservation Code from the International Code Council for public buildings, and it is expanding rail lines in Baltimore and the Maryland suburbs of D.C.

Beyond RGGI, Maryland mostly has to rely on carrots rather than sticks to entice non-government entities to cut emissions. For example, the state is reducing peak energy demand by offering discounts on electricity bills to consumers who cut their peak-time usage. Maryland’s secretary of natural resources, Joseph Gill, is overseeing a state program to plant trees on private land. “I went to the first planting in Montgomery County and the homeowner said he spent six hours a week mowing his huge lawn and he was thrilled to see 400 trees going in,” Gill recounts at the ClimateStat meeting.

The O’Malley administration boasts that Maryland’s greenhouse gas emissions are down 9.7 percent since 2006, the year before he took office. That record looks impressive, but that’s in part because his tenure coincided with national trends that reduced emissions: the Great Recession, the plateau in vehicle miles traveled, and the renewable energy and natural gas boom. The state’s emission decrease is actually only slightly larger than the decrease for the nation as a whole, although Maryland has also had higher-than-average population growth in recent years.

Environmental protection has been one of O’Malley’s main focuses, from Chesapeake Bay restoration to combating climate change. But he’s a technocrat, not an orator, so when he reaches for lofty rhetoric to describe his green vision, it comes out in dry, technical, and sometimes confusing language.

“We’re coming out of a time when we were all searching for that silver bullet, that special one thing,” O’Malley tells me in an interview in his office in the statehouse. “This is not a time of special one thing, this is the time of appreciating the system-ness of things, both in our manmade environment as well as our living environment.” I had asked which of his climate policies he would most like to see followed elsewhere, and this was his answer, delivered in the roundabout, bureaucratic jargon that I would find to be his trademark. “So if there were one thing, I would say it is the method of recognizing the solution and measuring the performance and measuring the actions of many things all at once.”

When I ask for his stance on the role of natural gas in the American energy portfolio, O’Malley says, “An all-of-the-above strategy did not land a man on the moon.” Pardon? “This is a systems engineering challenge, as was landing a man on the moon,” he clarifies. He goes on to explain that the focus of American energy policy should be on reducing greenhouse gas emissions, not just buying less foreign fossil fuels. He’s right, and he’s implicitly making an important distinction between himself and President Obama, but he would benefit from finding a more straightforward way to say it.

The Washington Post recently noted that O’Malley is “focusing his energies on wooing the kind of progressive activists who view Clinton with suspicion.” Case in point: O’Malley is promoting his climate achievements to environmentalists eager for a more aggressive alternative. Clinton was a reliable pro-environment vote when she was in the Senate — her lifetime rating from the League of Conservation Voters was 87 percent before being dragged down a few points by missing many votes while on the 2008 presidential campaign trail — but she has never been a leader on climate change in particular.

O’Malley, though, doesn’t show any interest in highlighting potential contrasts between himself and other Democratic leaders. When asked what he thinks the Obama administration might have done better on climate change, he doesn’t take the opportunity to criticize the president. And he hasn’t taken any digs at Clinton from the left either, even though her support for fracking might be a good point of attack. As New York’s surprisingly strong Democratic gubernatorial primary challenger Zephyr Teachout showed in September, the issue has resonance for many progressives.

O’Malley is leaving office with a mixed, or at least nuanced, record on fracking. Western Maryland, just south of Pennsylvania, has natural gas deposits that are recoverable by fracking, but they have yet to be exploited. O’Malley imposed a moratorium on fracking in Maryland in 2011. But he’s about to be succeeded by Republican Larry Hogan, an enthusiastic fracking proponent. So after the November election, O’Malley announced that he will unveil regulations this month that will allow fracking under limited circumstances, following the best practices of other states and imposing additional, stricter rules to curb air and water contamination and restrict where drilling can take place.

For some environmentalists, O’Malley’s willingness to allow fracking at all is their one disappointment in his record. “I would prefer that O’Malley would come out in favor of a ban on fracking in Maryland,” says Tidwell. But others say O’Malley is making a shrewd move. With rules in place before Hogan comes in, Hogan may find it more politically difficult to repeal them than he would have to simply not write any himself. “The fact that we have a governor-elect who wants to move forward on fracking means we want to get some protections in place as soon as possible,” Karla Raettig, executive director of the Maryland League of Conservation Voters, told The Washington Post.

Hogan’s surprising win last month has thrown a wrench in many of O’Malley’s plans. One notable example: Maryland will probably backslide on its climate progress and fail to meet its 2020 goal for emission cuts.

Hogan’s Democratic opponent, Anthony Brown, was O’Malley’s lieutenant governor. His defeat, in an overwhelmingly Democratic state, has been interpreted by some national political reporters as a rejection of O’Malley’s legacy. The New Republic’s Alec MacGillis attributed the result in part to the “rain tax” — a fee for building impermeable surfaces that O’Malley introduced to reduce pollution in the Chesapeake Bay caused by stormwater runoff. Brown, who is African-American, probably lost for a few structural reasons. It was a GOP wave election year in which Republicans won gubernatorial victories in other blue states like Illinois and Massachusetts. As Grist’s Brentin Mock and The Baltimore Sun’s Tom Schaller pointed out, suburban white Democrats abandoned Brown, as they often do to African-American candidates. Brown also by all accounts ran a bad campaign.

While Brown’s loss has taken some wind out of O’Malley’s sails, he’s still trying to raise his national profile. Asked what Obama can do in his last two years in office to address climate change that he isn’t doing already, O’Malley suggests “entrepreneurial federalism, can-do federalism, where the federal government partners with states that are more ready than others, more willing than others, to make progress.” After O’Malley leaves office, Maryland will probably no longer be such a state. But if he ever manages to get to the White House, O’Malley will have an opportunity to put those ideas into practice.