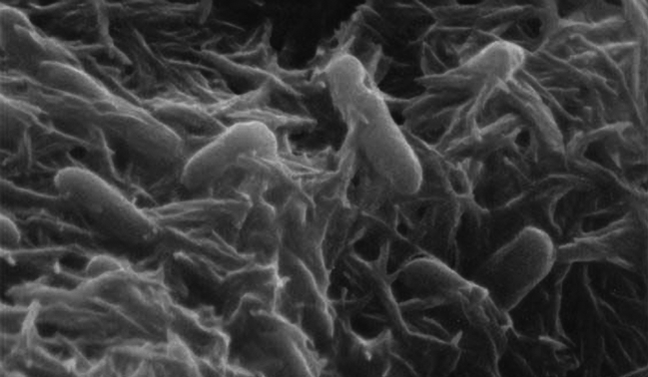 This affable little bacterium, named after Lake Oneida near Syracuse New York, is a real stand-up member of Earth’s microbial ecosystem. It thrives in a wide range of habitats, from the bottom of the ocean to a lake in upstate New York to regular old soil, can live with or without oxygen, and likes to form tight-knit communities known as biofilms. It also likes to digest, or “reduce,” metal pollutants in the environment into nutrients that other soil and sediment dwellers can feed on.

But according to a new study published in the journal Chemistry of Materials, there might be trouble afoot for this hearty do-gooder, as researchers have found that the bacterium’s “metal reducing” capabilities are no match for a particular component in lithium-ion batteries. And this is a problem for little S. oneidensis, of course, because society is really into electric vehicles and other battery-powered electronics right now and really not into properly disposing of e-waste.

The metal component in question is a nickel manganese cobalt oxide nanoparticle known as NMC, and it’s becoming increasingly popular among battery manufacturers for its ability to improve performance and reduce cost, the researchers report.

“Nickel is dirt cheap. It’s pretty good at energy storage. It is also toxic. So is cobalt,” Robert Hamers, a chemistry professor at the University of Wisconsin and one of the study’s authors, said in a press release.

That toxicity is why, when exposed to NMC at a concentration of 5 milligrams-per-liter, S. oneidensis communities experienced “significantly impaired bacterial population growth and respiration,” the researchers found. (And this from the bacterium that can reduce uranium!)

So while it’s generally a good thing that the world is trying to get 20 million electric vehicles on the road by 2020, this study is an important reminder that we should consider the complete life cycles of our technologies. Not doing so is how we end up with e-waste dumps like this (and by “we,” I mean the people in developing countries who have to take on the full health and environmental burden of a digital society largely created by rich people).

As Hamers put it in the press release:

“There is a really good national infrastructure for recycling lead batteries,” he says. “However, as we move toward these cheaper materials there is no longer a strong economic force for recycling. But even if the economic drivers are such that you can use these new engineered materials, the idea is to keep them out of the landfills. There is going to be 75 to 80 pounds of these mixed metal oxides in the cathodes of an electric vehicle.”

Of course, this is just one study of one material on one bacterium, so we can’t say that lithium-ion batteries are about to destroy the environment or anything. But we can say that lithium-ion batteries — and pretty much all of our electronics — are full of hundreds, if not thousands, of metal and plastic components, and there are roughly a bazillion microbes in just a pinch of soil. So is the proliferation of technology and our inability to recycle it gonna be a problem?

Should we feel guilty for watching the Super Bowl?