Bioart is weird, pure and simple. It’s DNA engineered to encode messages like “I am the Riddle of Life. Know me and you will know yourself,” paintings made of bacteria, rabbits genetically modified to glow (then don’t actually glow because fluorescent proteins don’t work in fur), living tissue grown to resemble Guatemalan worry dolls or mini leather jackets, and a “biocompatible” ear replica implanted in a human arm.

In short, bioart is what you’ll find at the bottom of the lab-grown, biofluorescent rabbit hole that emerges when scientists and artists get together and turn the building blocks of life into a new kind of creative medium. And according to a group of researchers at MIT and Harvard, it’s also a funky new way to engage the public in the controversial and often frightening world of biotech. Here’s how they put it in the latest issue of the journal Trends in Biotechnology:

Regardless of their potential for health benefits and quality of life, genetic technologies have consequences that are not absolutely foreseeable and this has led to public uncertainty about implications for personal privacy and human rights, eugenics, food and drug safety, replacement of natural systems with bioengineered counterparts, involvement of multinational corporations with genetic propriety, worldwide agricultural monopolies, and prospects for the weaponization of biotechnological accessories for the military and law enforcement. Bioartists find these issues to be compelling subjects for their art. 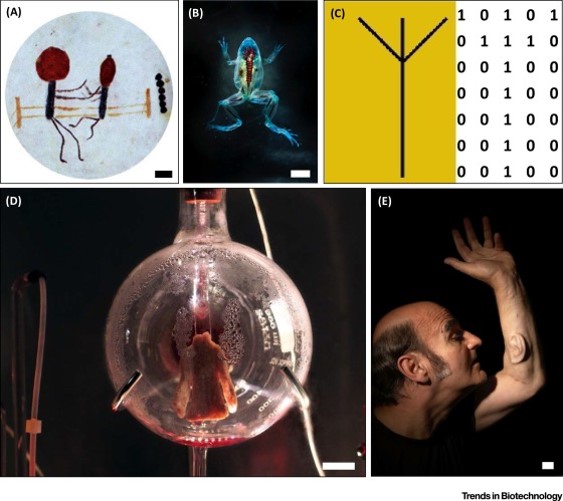 George Church, a Harvard geneticist and synthetic biologist famous for trying to bring back the woolly mammoth by splicing mammoth DNA into an elephant, was one of the co-authors on the paper. His lab at Harvard is currently hosting the artist Joe Davis, another co-author, who in the ’80s worked with a geneticist to encode a message into the DNA of E. coli. The project, called Microvenus, was meant to explore the possibility of one day sending such messenger organisms into space as a way to communicate with extraterrestrials. In a press release about the new paper, Davis and Church spoke with Cell Press about their collaboration:

“It’s Oz, pure and simple,” Davis says. “The total amount of resources in this environment and the minds that are accessible, it’s like I come to the city of Oz every day.”

But it’s not a one-way street. “My particular lab depends on thinking outside the box and not dismissing things because they sound like science fiction,” says Church, who is also part of the Wyss Institute for Biologically Inspired Engineering. “Joe is terrific at keeping us flexible and nimble in that regard.”

For example, Davis is working with several members of the Church lab to perform metagenomics analyses of the dust that accumulates at the bottom of money-counting machines. Another project involves genetically engineering silk worms to spin metallic gold — an homage to the fairy tale of Rumpelstiltskin.

Bioart isn’t entirely new. It goes all the way back to the 1920s, when one Alexander Fleming was making stick figure paintings with bacteria and discovered that a fungus called penicillin was killing some of his work. It also hasn’t always been successful. There was one time, for example, in 1970, when German artist Hans Haacke tried to draw attention to the destructiveness of the pet trade by buying and releasing ten endangered Hermann’s tortoises in a part of France where the tortoises roam free. Turned out, a few of Haacke’s purchases belonged to the wrong subspecies of tortoise and ended up messing with the local gene pool, ultimately compromising the distinct genetic lineages of both subspecies.

And then there was the controversial environmental art of the ’60s, ’70s, and ’80s — hillsides paved with asphalt, islands covered in plastic, craters carved with tunnels and chambers. Davis, Church, and their co-authors note that environmental art eventually became more about restoring nature, and together with advances in biological sciences, paved the way for today’s bioart.

With the rise of Romanticism several centuries ago, artists seemed to shed longstanding commitments to scientific and technical literacy while, at the same time, science started its long march toward secularization [68]. In this century, art and science are in the process of disengaging from this legacy of separation. The interdisciplinary landscape of life sciences has come to include chemists, physicists, engineers, mathematicians, and computer scientists. Partnerships with bioartists can contribute cultural and aesthetic contexts essential to translating basic research into useful applications. While the role of bioart in both the criticism and application of science will undoubtedly continue, perhaps a more profoundly important and yet less recognized contribution may be the ability of bioart to help science understand itself.

That’s deep, man. Call it Oz, call it Wonderland, call it whatever you want — all I know is, this is one glowing white rabbit that I intend to follow.