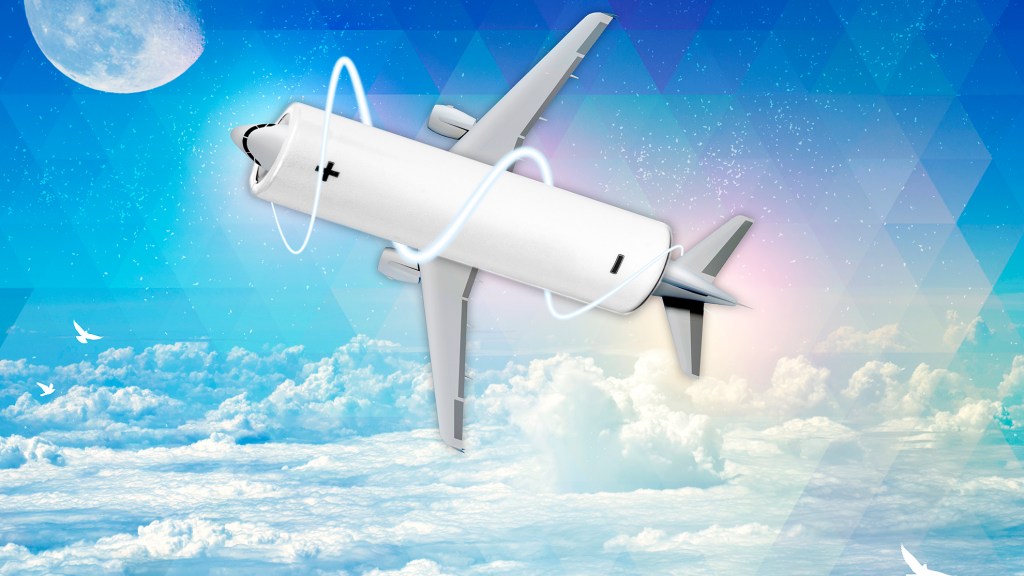 NASA, the earnest, dimple-cheeked do-gooder of government agencies, wants to revolutionize the flying pollution factories that we call airplanes, confirming what Neil deGrasse Tyson has been telling us all along: NASA is the coolest.

The agency announced yesterday that it will fund research into six futuristic airplane ideas over the next two years. The goal of the so-called Convergent Aeronautics Solutions (CAS) project is to create a new type of aircraft with “maximum efficiency and minimal environmental impact” that can “demonstrate the feasibility for urgent medical transportation from the wilderness of Alaska to the Mayo Clinic without human interaction” … which raises the question: What’s NASA got going on in the wilderness of Alaska?

Here are the six ideas from the agency — along with the re-naming suggestions from yours truly that make the theoretical planes sound as cool as they are:

Multifunctional Structures with Energy Storage [The Flying Battery]
A challenge with electric propulsion is the mass (volume and weight) of the batteries that must be carried inside the aircraft. But what if the aircraft structure itself could serve as the battery? Advances in materials, chemistry and nanotechnology might make this possible.

Autonomy Operating System for UAVs [Robo-plane]
A concern about UAV’s is how their internal logic/software might respond to unforeseen situations – such as a sudden worsening of weather, or another aircraft flying too close – that would prompt the need for a sudden change in its programmed course and behavior. The question is can advances in programming and artificial intelligence result in making it possible for a UAV to respond to those situations on its own, without remote human interaction, in ways that are as sure and predictable as would be made by a certified human pilot?

Mission Adaptive Digital Composite Aerostructure Technologies [The Shape Shifter]
In recent years there have been advances in making and using composite materials in aircraft structures, as well as advances in designing future aircraft that can adapt to changing flight conditions by such techniques as changing the shape of their wings. The question is, what if those technologies could be combined such that super strong, lightweight composite structures also are able to be flexible and change their shapes as needed during a flight?

High Voltage Hybrid Electric Propulsion [Self-healing Aero Light, a.k.a. SAL]
A challenge in implementing electric propulsion on airliners (where electricity drives the engine fan to produce thrust, rather than petroleum-based fuel being burned in a traditional jet engine) is how to make the whole power distribution system as efficient and lightweight as possible.

A potential solution may be found in advances in high voltage, variable frequency drives now used on the ground, which significantly reduces the size and weight of the required equipment.

At the same time, researchers will investigate the use in the power distribution system of “self-healing” insulation. The idea is that if any deterioration in a high voltage electrical line begins, the resulting exposure of the electricity to chemicals bonded in the insulation would automatically repair the line – reducing in-flight problems and costly ground maintenance.

Learn to Fly [The Virtual Flyer]
Historically, the process for designing, building, testing and certifying new aircraft for flight can take years and cost a lot of money. The question is, are we advanced enough in our understanding of flight and the use of computer tools where we can safely enable new airplane designs to be more rapidly flown by skipping ground-based testing.

Digital Twin [The Digital Twin — that’s pretty good, actually]
The question here is can a computer model be built that accurately simulates and predicts how an aircraft or its individual components are affected by aging and ongoing operations such that a “digital twin” of a particular airplane can be created. This could help predict when problems might arise in order to prevent them from developing.

Go ahead, pick your favorite. Just don’t get your hopes up. Even NASA admits that these ideas are pretty far-out:

Of course, it’s very possible that after the studies are completed, the researchers may find that for whatever reason – technology, cost, the laws of physics – the answer is no, it’s not feasible. At least not right now.

Right on, NASA — challenging the laws of physics since 1958.

But as crazy as these ideas sound, this is the agency that put humans on the moon in the 1960s, so they could probably make a pretty sweet airplane … as long as the powers that be give them the money to do it.