Sorry to burst your bubble, but you've got a blind spot as big as the planet 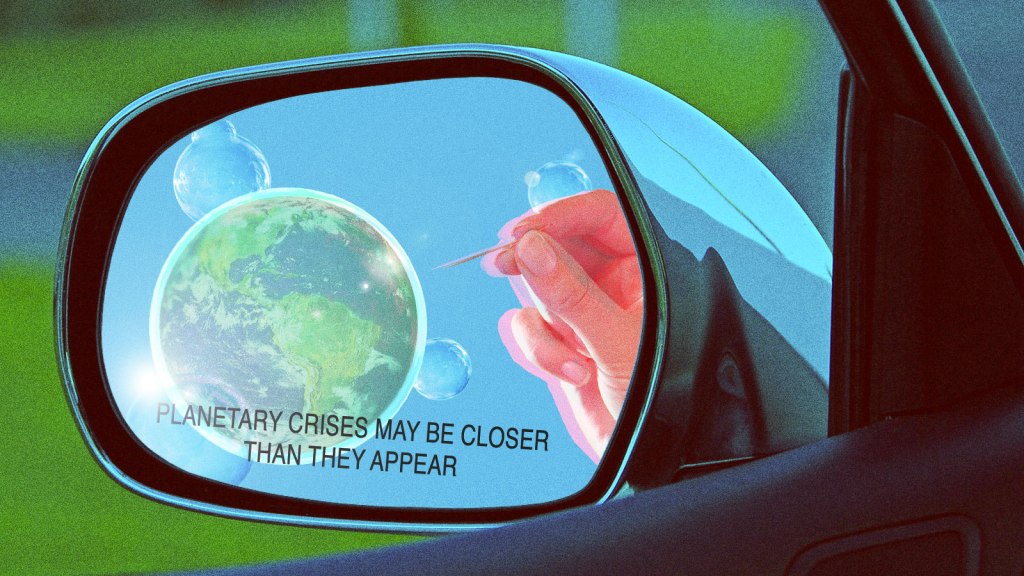 Sorry to burst your bubble, but you’ve got a blind spot as big as the planet

What if we saw things for what they really are?

Coal bears little resemblance to a bundle of prehistoric trees. Your plastic shampoo bottle, fashioned from fossil fuels, reveals nothing about oil spills or the giant plastic garbage patch floating in the ocean. And hate to break it to you, but chicken nuggets look nothing like the live, squawking bird they come from.

Much of what we encounter every day is really nature in disguise, writes Ziya Tong, a Canadian science journalist, in The Reality Bubble. It explains our inability to recognize the hidden world that sustains us — where our food comes from, how we get our energy, and what we do with our waste.

“It’s weird,” Tong told me. “We’re the most powerful species on Earth, and yet we fundamentally have no idea how we survive.”

Her new book investigates these blind spots and shows how they’ve led us to our current crisis. “Our species is locked on a deadly collision course, one that threatens to extinguish life on Earth precisely because our vision of reality is incompatible with scientific truth,” she writes.

Part of the problem is that we can’t see clearly through the “reality bubble” that surrounds us. It warps our perception of the world and gives us a misguided sense of security. “It shields us from thinking about the forces ‘out there’ that are seemingly beyond our control and lets us get on with the business of our lives,” Tong writes. And much like political bubbles or the real estate bubble, at the end of the day, it’s bound to burst.

With curiosity and humor, Tong mixes science, philosophy, and history in a book filled with revelations big and small: Domesticated livestock now outnumber wild mammals 15 to 1. Three tablespoons of crude oil contain an equivalent amount of energy to eight hours of human labor. And China once fertilized its soil with human poo.

A broadcaster who anchored Daily Planet on the Discovery Channel and reported for NOVA on PBS, Tong is now the vice-chair of Canada’s World Wide Fund for Nature. I called her up to ask about this reality bubble and how to escape it. Our conversation has been condensed and edited for clarity.

Q. Why did you decide to look into humanity’s blind spots?

A. Well, being a science broadcaster for the last 15 years, I realized that science is able to see a lot of things that ordinary people can’t. If you think about it, we still have the eyesight of the average person during the Neolithic era 12,000 years ago.

But in working with so many scientists from so many different fields, I started to realize that they almost had a pixelated world view. Scientists are somewhat siloed, so they’re all seeing different parts of the world, but only in putting their images together could we see a bigger picture.

Q. What led you to write this book?

A. One day I was just typing on Twitter — sometimes I tweet whatever whatever random thoughts I’m having, almost like shower thoughts. I realized that, here in the 21st century, there are cameras everywhere except where our food comes from, where our energy comes from, and where our waste goes. That really struck me as something that I needed to investigate further.

I get to interview some really smart people as part of my job. I would ask them something really basic, like “Do you know what oil is?” And 95 percent of people that I asked couldn’t answer that question — “it’s like dead dinosaurs, right?” [It’s mostly dead algae.] You know, here’s the most important fuel that powers the global economy, powers our everyday lives. That’s a huge blind spot.

Q. Yeah, I realized I didn’t know what oil was until I read your book.

A. That’s the thing. I was talking to really smart people in different areas, and the only people that really had a good sense of this was like geochemists and paleontologists.

Q. Was there anything in particular you learned that surprised you?

A. I was constantly surprised while writing the book. Like, I didn’t realize that mummy unrolling parties were a big thing until I started doing research. I really enjoyed finding the quirky stories that could kind of enchant and create a sense of wonder for people.

Q. So, back to science. How do we know that science is showing us what’s truly real, when it’s being conducted by people who also have a warped perception of reality?

A. I see scientists as reality testers, always poking and playing in a world that’s largely invisible to us. But every once in a while, you can prove that these invisible phenomena exist. An example of that is how our GPS works. That’s based on Einstein’s special and general theories of relativity. And if Einstein were not correct, then your average GPS would be off by something like 10 kilometers per day.

It is really factoring in the fact that he taught us how to see space and time so radically different from the absolute time and space of Newton’s point of view. And we can test that out, and you can prove it. It’s right down to something as simple as you being able to find your way to the supermarket with your smartphone GPS.

Q. In the book, you show how surveillance is being used against people who are trying to reveal some unsavory truths of our energy and food systems, like journalists and animal rights activists. How did you come to realize that?

A. I think that’s because I have a lot of friends who are hackers. I’ve been following what’s been happening in that arena for a long time. The book details it from the eyes in the sky — these satellites able to spy on us from thousands of feet up — all the way down to surveillance systems able to monitor pores on our skin. And yet all of this is invisible to us. That’s also a huge blind spot. This entire system is set up to really monitor us, but we don’t even see who or what is doing the monitoring.

Q. How can we go about fixing our personal blind spots?

A. One of the quotes that I was inspired by is from Yoda: “You must unlearn what you have learned.” And despite that we live in a world that is inundated with information, we need to start doing our own investigating. The No. 1 thing about a good thinker is not taking what you see or read for granted.

Q. You come to the conclusion that our obsession with owning stuff is really the fundamental problem. How do we go about un-learning how to own things?

A. Well, when it comes to ownership, there are so many things that we didn’t own previously. Ownership is a slow creep — I almost picture it like a slime mold enveloping the world. I mean, if you think about cells or water, there are so many different things that we didn’t previously own that people are starting to stake court claims over. This is a really manufactured human notion.

You know, it was once considered very normal to own human beings and own slave labor. And it was also considered very normal to own women — women were property. But once we got rid of those notions of ownership, despite the fact that they were so deeply entrenched, the world didn’t get worse, it got better. I fundamentally believe that once we stop believing that we can own every f***ing thing on this planet, things will not get worse, they will get better.