Walmart adopted sustainability as a corporate strategy in 2005. It was struggling mightily at the time. Bad headlines stalked the chain, as its history of mistreating workers and suppliers finally caught up with it. One analysis found that as many as 8 percent of Walmart's customers had stopped shopping at its stores. Grassroots groups were blocking or delaying one-third of its development projects. Stockholders were growing nervous. Between 2000 and 2005, Walmart's share price fell 20 percent.

As then-CEO Lee Scott told The New York Times, improving labor conditions would cost too much. It would also mean ceding some control to employees and perhaps even a union. Going green was a better option for repairing the company's image. It offered ways to cut costs and, rather than undermining Walmart's control, sustainability could actually augment its power over suppliers. Environmentalism also had strong appeal among urban liberals in the Northeast and West Coast — the very markets Walmart needed to penetrate in order to keep its U.S. growth going.

Since Scott first unveiled Walmart's sustainability program, the company's head office in Bentonville, Ark., has issued a steady stream of announcements about cutting energy use, reducing waste, and, more recently, selling healthier food. Most of these announcements declare goals, not achievements. But the goals sound audacious enough to reliably produce sweeping headlines and breathless accounts of how Walmart could remake the world by bending industrial production to its will.

By 2010, the number of Americans reporting an unfavorable view of Walmart had fallen by nearly half, from a peak of 38 percent in 2005, to 20 percent.

What the news media haven't reported

As I started to work on this series, I looked back at the coverage of Walmart's sustainability campaign over the last six years and was shocked by just how much of a public relations boost the media have given the company and how little public accountability they have demanded in return.

Some of the most serious environmental consequences of Walmart's business model simply aren't on the table. Walmart doesn't talk about them and, despite expending a lot of ink and airtime on the company's green activities, the news media don't either. Indeed, journalists rarely stray beyond the parameters of what Walmart has put in front of them.

More surprising is the absence of basic information essential to evaluating what Walmart is actually accomplishing. Take, for example, the share of Walmart's electricity that comes from renewable sources. There have been thousands of news stories and blog posts on the company's renewable energy activities since 2005, so one would think this number would be reported often. I couldn't find it anywhere. (I did eventually dig up enough data to figure it out myself. The answer: less than 2 percent of the company's electric power in the U.S. comes from its wind and solar projects.)

Or take the case of the Sustainability Index, Walmart's much-publicized effort to put a green rating on every product it sells. Two years after the media fanfare surrounding the announcement, no journalist, as far as I can tell, has investigated what progress, if any, Walmart has actually made. (According to my research: not much.)

This series aims to fill in some of these gaps and, hopefully, inspire other writers and journalists to take a closer look at what Walmart is and isn't doing.

What environmentalists haven't paid attention to

“Walmart is here to stay” — that's the refrain I often hear from the many environmental organizations and green-business advocates who have applauded the company's sustainability efforts. The world's largest retailer isn't going away, the thinking goes, so anything it does to reduce its footprint is a good thing.

But Walmart circa 2005 is, in fact, long gone. Today's Walmart is much, much bigger. It sells 35 percent more stuff in the U.S., and its international store count has almost tripled, from about 1,600 to 4,600 stores.

For Walmart, sustainability is a growth strategy — and a highly effective (and darkly ironic) one at that. Six years ago, Walmart was facing widespread opposition, including legislation that would have required better labor practices and limited the company's growth. Thanks at least in part to its sustainability campaign, and the warm reception from many environmentalists, those roadblocks have eroded and Walmart's expansion is once again rolling at full speed.

As it grows, Walmart pushes out existing enterprises and local economic systems and replaces them with its own, often far more polluting, global supply chain and sprawling stores. If any single fact could sum up what's at stake, it would be that Walmart now controls one-quarter of our country's grocery sales and aims to capture half — a prospect with disastrous implications for the environment, social justice, and local economies.

So far, though, most mainstream environmental organizations have focused on the small bits of good that Walmart could do — reduce PVC in packaging, for example — while ignoring the much larger consequences of its ever-expanding business model.

This series will mark, we hope, the beginning of a more comprehensive and critical response to Walmart's sustainability initiatives.

Read the articles in the series:

Stacy Mitchell is a senior researcher with the Institute for Local Self-Reliance, where she directs initiatives on independent business and community banking. She is the author of Big-Box Swindle and also writes a popular monthly newsletter, the Hometown Advantage Bulletin. She lives in Portland, Maine, and has lately joined Twitter.

Walmart’s six-year-old sustainability campaign has helped improve its public image, enabling the company to grow bigger and faster. That growth, ironically, has dramatically increased the retailer’s environmental footprint, and hurt local economies and the U.S. job market along the way.

Forever in blue jeans, babe? Not anymore.Photo: bburkyMy friend Tony’s closet is as good a place as any to begin an investigation of Walmart’s environmental impact. Tony has a pair of Levi’s that date back to high school more than …

Walmart is moving like a tortoise toward its clean-energy goal.Context is critical to understanding Walmart’s sustainability initiatives and their impact on the retailer’s overall environmental footprint. But context has been sorely absent in the news media’s coverage of Walmart’s green … 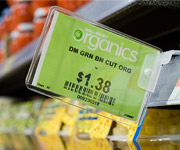 In 2009, Walmart created a stir when it announced that it would develop a Sustainability Index to assess the environmental impacts of every item on its shelves and provide an easy rating system to help shoppers make greener choices. CEO … 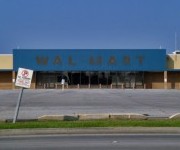 My, that’s a big abandoned parking lot you have.Photo: Rob StinnettEarlier this year, the New Jersey Sierra Club and the Pinelands Preservation Alliance tried but failed to block a permit for a new Walmart supercenter in the small coastal town … 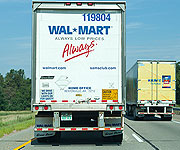 Join a live chat with Stacy Mitchell about Walmart's sustainability efforts and how they've been coming up short, on Nov. 30 at 3:00 p.m. ET / noon PT. 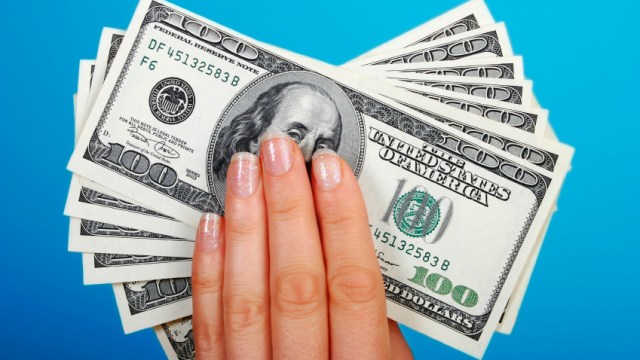 In 2006, Walmart made headlines when its vice president for corporate strategy and sustainability, Andrew Ruben, told a congressional committee that the company “would accept a well-designed mandatory cap-and-trade system for greenhouse gases.” Other major U.S. companies had spoken favorably … 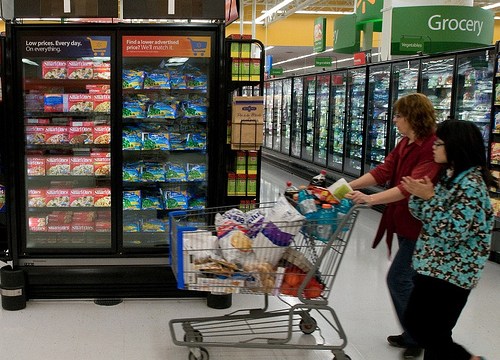 Eaters, beware: Walmart is taking over our food system

Aubretia Edick has worked at a Walmart store in upstate New York for 11 years, but she won’t buy fresh food there. Bagged salads, she claims, are often past their sell-by dates and, in the summer, fruit is sometimes kept … 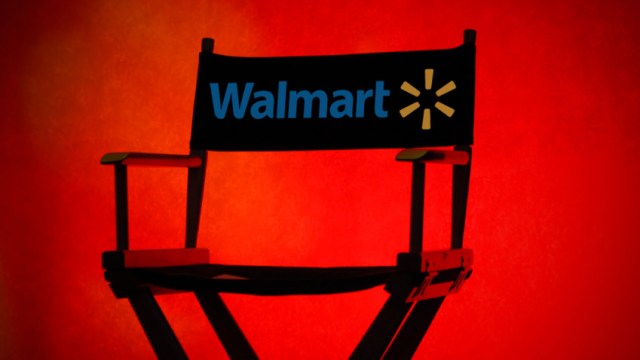 The world's biggest retailer has gotten an undeserved free pass from many environmentalists. It's time to take a tougher line and set a higher standard, argues Stacy Mitchell in the conclusion to her series on Walmart's greenwashing.