Americans love cheese. In 2019, U.S. dairy producers made 13.1 billion pounds of it, according to the USDA. But that number is dwarfed by the amount of accompanying waste. A rule of thumb in cheesemaking is that 10 pounds of milk yields one pound of cheese and nine pounds of whey.

Whey is considered to be one of dairy’s biggest pollutants. Figuring out how to get rid of it is yet another example of America’s waste problems catching up with us. In industries like food and apparel, businesses have been built to make and deliver products to customers over and over. All that stuff adds up. In 2018, American food waste clocked in at 63.1 million tons, according to the EPA. And 17 million tons of textiles — mostly clothing — wound up in the trash.

The good news is that independent businesses founded by whip-smart, creative entrepreneurs are delivering solutions that can change the way entire industries operate. They’re taking waste streams — like whey or discarded fabric — and turning them into profitable new production routes. And with early support and funding from Portland nonprofit VertueLab, these entrepreneurs are poised for success.

For a long time, the dairy industry has grappled with the burden created by its left-behind liquid. Some dairy producers dehydrate and concentrate their whey to turn it into protein powder. Others feed whey to pigs, or spray it onto farm fields as fertilizer — just not too much. While whey is mostly water, the nutrients it contains (lactose, protein, and minerals) can pollute waterways and cause algae growth. Spilled whey has also been known to kill fish.

Now, though, some of that whey is finding an upscale fate: It’s getting distilled into an 80-proof spirit.

“From farm to flask,” says Emily Darchuk, founder and CEO of Wheyward Spirit, which launched in 2020. Darchuk is a food scientist who has worked on everything from “space food to baby food,” at companies like Coca-Cola, NASA, Horizon Organic, Silk, and Kellogg’s.

Her newest creation, Wheyward Spirit, is a hard liquor unlike gin, vodka, or rum. “It has a little bit of a very soft, subtle, sweet terre aroma. It has a vanilla oaky note, too, that comes from the natural lactones in dairy,” Darchuk says. “A little bit of warm spice, but very light…and you’re getting this really nice creamy feel, velvety smooth finish.” 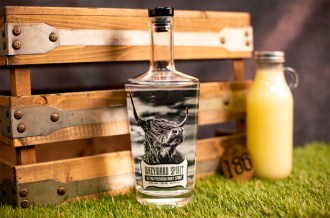 The liquor can stand on its own for taste and appeal; Wheyward Spirit won a Good Food Award in 2021. It currently sells online, direct to consumer, in 30 states across the U.S.

“You can’t sell someone your problem,” Darchuk says. “But you can help to create a solution that people want to be a part of, and that’s my goal with Wheyward Spirit.”

And this liquor goes farther than most other bottles on the shelf. By capturing a waste stream and giving it new life, Darchuk’s startup embraces the principles of the circular economy.

“The circular economy seizes that opportunity to capture an underutilized product that was contributing to the world’s waste issues and regenerate it,” says Emma Chow, who leads the food initiative at the Ellen MacArthur Foundation, a research group that works with global business and government leaders to champion the circular economy. Their aim is to design out waste from the outset.

Food waste comes in two forms, Chow says. There’s edible waste, like the leftovers going bad in your refrigerator. And then there are the byproducts of food production that get discarded long before a food item gets to the grocery store. These byproducts have value. The circular economy challenges the food industry to source products grown regeneratively, to make the most out of food items that already exist, and to trailblaze creative new ways to get byproducts back into the market.

From breakfast cereal to cars to pajamas, every made thing is designed by people who decide what a product is, what it’s made from, how it’s used, and how it flows through supply chains. These factors are often determined through design, Chow says, and they are integral to changing a business model from linear to circular.

The circular economy can sometimes overlap with concepts like upcycling or recycling, but the definitions are distinct. One of the differences is the end point. Upcycling may take an old jean jacket and turn it into a one-of-a-kind tote bag, but the material is still what Chow calls “an end-of-pipe solution.” The material is still going downstream.

The circular economy tasks entrepreneurs and designers with thinking upstream. How can the apparel industry, for example, design waste out entirely? Can it facilitate repair, reuse, resale, or rental? How can manufacturers take responsibility for a product they make, not just until they sell it, but for its entire lifetime?

“Trillions of items a year get made. And then again the next year. Again, the next year. The biggest issue is that the only way for apparel brands to grow is to make more stuff,” says Nicole Bassett, a former consultant in sustainable business strategy for the apparel industry.

After a career spent working on sustainability for companies like Patagonia and Prana, Bassett says she kept running into the same question again and again. Even clothing companies with solid reputations for sustainability are built on making things. So how can businesses earn a profit without having to make more stuff?

This question led Bassett to co-found The Renewal Workshop, a company that helps apparel brands go circular. It stretches CEOs, entrepreneurs, and businesses of all kinds to think beyond normal constraints. Working with business leaders, she sees how hard it is to change a business model that was built to sell a thing once.

“Our economy today is linear. We take things, we make them, we sell them, we throw them away,” Bassett says. “We don’t have a systemic way to get things back. We also never planned how to use them again.”

Currently less than 1% of clothing is regenerated into something new. But Bassett’s company is working hard to increase that number.

Closing the loop on clothes

The Renewal Workshop provides a service that enables apparel and home goods companies to become circular businesses by setting up an afterlife for their goods. Bassett’s vision isn’t that different from a car sales lot with a selection of new and used vehicles.

“Our goal is that you would go to any apparel brand and you could buy new and you could buy renewed from them,” she says. It’s not just about capturing old items and reselling them, though. It’s also about business practices that are forward-looking enough to close the loop completely. 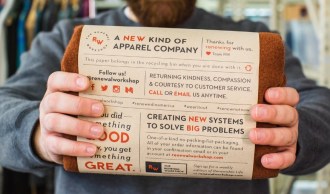 One of the workshop’s clients is a linens company called Coyuchi. With The Renewal Workshop, they set up a new program for customers to return used items like blankets, duvet covers, towels, and sheets in exchange for a discount. The Renewal Workshop cleans them, repairs them, and gives them back to Coyuchi to sell on a recommerce website, which generates a new revenue stream for the company.

If an item is too worn and can’t be resold, The Renewal Workshop sends it to recyclers, who turn it into new material that Coyuchi uses to make their full circle blanket, which is 52% recycled cotton and 48% new organic cotton. That’s possible because the company uses materials — mostly organic cotton — that are easier to recycle than fabric blends. Since 2017, Coyuchi says it has taken back 34,694 pounds of fabric.

“Like a lot of the issues we face as a globe right now, we have the solution,” Bassett says. “We just are choosing not to implement it because we’re too connected to an old way of working that hasn’t broken yet.”

Based on the environmental impacts of these practices, though, it’s fair to say the old system broke long ago.

Since The Renewal Workshop’s launch in 2016 with a staff of 8, it has grown to a staff of 54, with factories in Oregon and in the Netherlands. They’re now working with 20 companies, big and small, including The North Face, Carhartt, Prana, Toad & Co., Tommy Hilfiger, and a sub-brand of H&M called COS.

Bassett thinks that the pandemic has accelerated the shift to thinking circular because it revealed how vulnerable the economy is when it’s dependent on a global supply chain. The disruption brought about by COVID-19 helped businesses realize that they can and should rethink their practices.

“The linear economy doesn’t make sense anymore,” Bassett says. The circular economy is here and it’s happening. “So if you aren’t paying attention to this, you probably should.”

VertueLab is a nonprofit fighting climate change by providing funding and holistic entrepreneurial support to cleantech startups. Through a decade of work they have a proven model that can help accelerate climate solutions that are key to reversing the climate crisis.

What would a just transition look like for the Navajo Nation?